A little less than four years ago I posted a discussion topic on Map Indices, specifically those published after Roger Nathan’s Collectors Guide.

During the discussion that followed I was informed by Dale Murphy about variations to the covers, and sometimes the content, of many of the Indices. Here is a snippet from one of Dale’s comments in that discussion:

In addition I note that there were several variants of the map indexes produced. Between 1933 and 1943, 8 indexes were published with variations in the front page scroll that either read "25c" or "Washington". I suspect the latter were produced for the NGS map cabinets that the society regularly presented to leading political figures, of which I have one cabinet in my collection. In any case, I can confirm 4 of these "Washington" indexes that I have in my possession.

There were also three variations of the front page globe (colored or grey) in the 1950 South America, 1950 Western Europe and 1953 Mexico & Central America indexes. I have both variants of all issues and can confirm their existence.

Finally, it has been suggested to me that there were print variations relating to advertising on the back cover of the 1942 Asia [1] and 1944 USSR indexes [3] (I cannot confirm this as I only have one version of each of these, without advertising).

Up until the 1971 Asia index you mentioned, I therefore estimate that there were 114 unique indexes produced [i.e. 99+8+3+4] (or 113 discounting the 1940 Southwestern US index you mention) and would appreciate confirmation of the existence of those I don't have as detailed above.

It would be wonderful to produce a definitive list of all map indexes produced. To this end, I will list what I believe to exist in my next post (otherwise would exceed character numbers of current post).

As you can see from Dale’s post, there are three flavors of variations to the Map Indices. Two are related to differences of the Covers and one related to differences in advertising content. The first of these types of variants I’d like to discuss are the colored vs. uncolored globes that appear on the cover of most of the Map Indices. The majority of the Indexes produced for each map have globes that colored a metallic gray. Apparently, however, during subsequent production runs of these Indexes a lower-quality version was produced. The inside pages are course and not glossy like the original Indexes (and the Magazines). The most obvious difference, however, are the globes on the front covers. They are traced outlines with no coloring. In his comment, Dale mentions three of these variants and I added four more. Recently I acquired three more (plus one from Dale’s original three). Also, Jeff Persons has informed me about another two,  This brings the total count to twelve (so far) and extends the timeframe for these variants to at least fifteen years. Here is a list of uncolored globe cover:

1939 Central Europe and the Mediterranean

1950 Africa and the Arabian Peninsula

Here are images of the oldest and the newest of these Map Indices: You will notice that on the 1939 Index, the globe is located at the top of the page. The globe was moved to the center of the page in late 1942 (Asia and Adjacent Areas).

While I have no definitive proof that these uncolored globe variants were produce for all of the Indices upon which globes appear (they discontinued the globes in 1961) it does appear likely that most of these Indexes have this variant out there. One last bit of trivia on this variant: the very first Map Index (May 1918, Western Theater of War) has an uncolored globe on it. I doubt that there ever was a metallic gray version.

The second variant I’d like to discuss is the advertising content on the last two pages of the 1942 Asia and Adjacent Areas and the 1945 USSR Indices. Apparently, there are variants to these two that have blank pages instead of the standard List of Publications. In addition, there is a third variant to the 1945 USSR Index. Instead of the usual List of Publications or the blank pages, this variation has pictures of books available from the Society.

I have added to these two map indexes, with three more Blank Page vs. List of Publication variations that were reported to me by Mel De Vilbiss, an active member here at the 'Corner.  Here is the current list of this second type of variant: 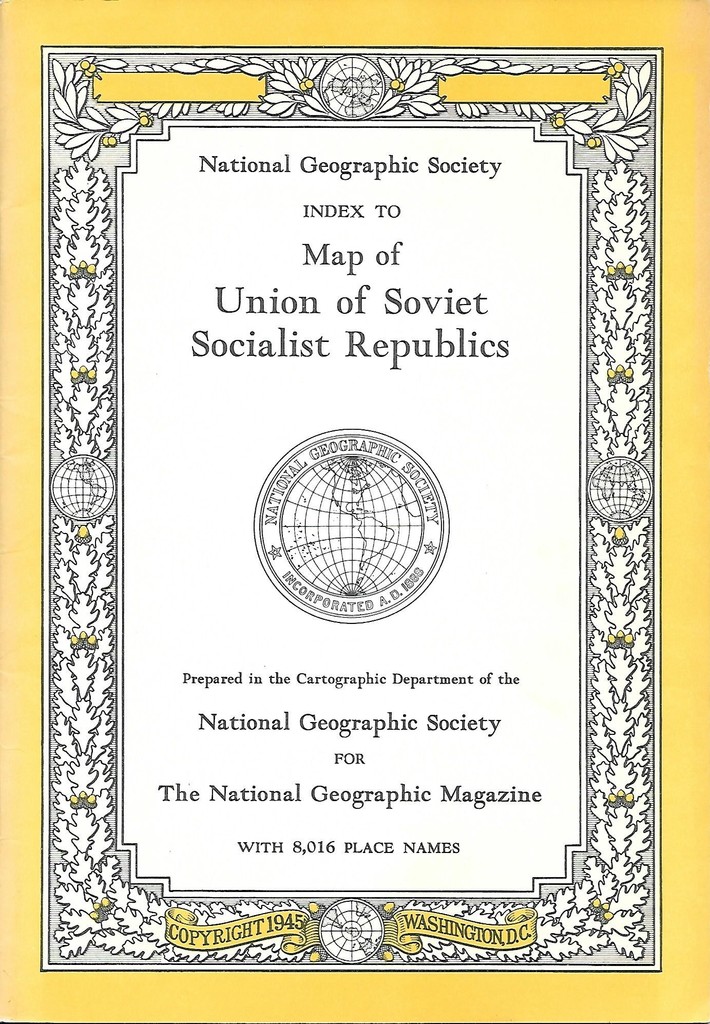 The last type of variant I’ll touch on is the alternate text in the lower-right banner on the cover. While the banner to the left of the southern hemisphere (bottom) consistently reads “COPYRIGHT 19xx” where xx completes the year the Index was published. The banner to the right could either read “25c THE COPY” or “WASHINGTON, D.C.”. Dale listed eight such examples where an index has two versions of this kind. They include:

1943 Pacific and the Bay of Bengal

A couple of notes here. First, the 1934 Asia and Adjacent Areas cover does not have a version with “WASHINGTON, D.C.”, instead the variant has the “25c” slanted to the left (a reverse italic). Second, the 1942 Asia and Adjacent Areas Index has the two variants and, as mentioned above, a version without the List of Publications giving it three variations to this one Index. As with the uncolored globes, there may be more of these types of variants yet to be documented.

Note: I just updated the "Uncolored Globe" list to include two indexes identified by Jeff Persons.

I'm working on a new inventory; I have completed collating Nathan's list and your list from above (amended with Jeff Persons' additions).

I hope to edit my spread sheet and provide it to the forum within the week...

P.S. I read everything you post - I love the detail and clarity of your postings!

Thanks for the kind words, Mel.

I'm looking forward to you posting your inventory.

I'm going to miss my deadline of providing a new inventory this week - got to go out of town for a few days.

I am almost finished, but have discovered three more variants:

And have confirmed the 1943 World Map variants (two):

A rough count leave us at 129 different issues including all variants - with, I'm sure, more to discover.

Hope to finally get this published next week.

I've update this discussion to include your three new variants.  Have a good trip, and hopefully you can get your inventory soon.  I'm looking forward to it.

Attached is my inventory spreadsheet for my Map Indexes. Red is obviously something I'm missing. The "x, y, z" annotations allow me to keep things in order when I organize my spreadsheet alphabetically by title.

I attempt to mimic the Index title on my spread sheet. Obviously, if I don't have it I can't mimic the title.

I once again verified my list as being complete with Roger Nathan's book then I included all the variations Tom provided with this thread plus a few more I discovered along the way.

The "variations" count is up to 129 and WILL continue to grow. I look forward to all/any input to assist in making this list more complete.

Please read the notes on the last page before attempting to make sense of this very "detailed" spreadsheet.

To assist you, I've copied those notes here:

BPV - Blank Page Variant {at the back of the index};

LPV - List of Publications Variant {at the back of the index};

PBV - Pictures of Books Variant {at the back of the index};

LMV - List of Maps Variant {at the back of the index};

Note: the 1934 Asia and Adjacent Areas cover has two variations of the 25c scroll with the second being a slanted left (reverse italics) and does NOT have the WA - "WASHINGTON, D.C." variant, the standard scroll if not otherwise stated {again, right side scroll at bottom of front cover}

This is awesome, Mel.  I'm going to enjoy reading this in detail.  Thank you so much.

I have an observation on your June 1940 Southwest United States (SWUS) entry.  You reference the 1950 Africa map index as your reason for including it in your list.  I believe that entry in the index is for the December 1948 SWUS map and its index.

All this ignores the elephant in the room: the fact that the June 1940 SWUS map has no number/letter grid.  This means there is no way to reference the place names in an index.  I think this was one of Nathan's few mistakes.

I am continuing to peruse, and enjoy, the list you've provided.  Thanks again. In Nathan's 2000 copyright version of his original book he did list that as an error.  There was no map index for the June 1940 Southwest US map.

Thanks Tom and Jeff,

I'll try and figure out a succinct way to explain the info you both provided "and still keep it on the list" because somewhere someone will do as I did verifying their reference list, while building upon one of the greats own inventory, i.e. Nathan, and become as confused as I did - ha!

No need to apologize for keeping a ghost.  It took me a long time to give up this one, and by the time I did, I already had another one.

There is absolutely no record of there ever have been a May 1921 Asia map index, but I have it on my list anyway because it has a number/letter grid (i.e. indexable).