This is my thirty-fifth short article about a National Geographic Magazine as it reaches its publishing centennial. 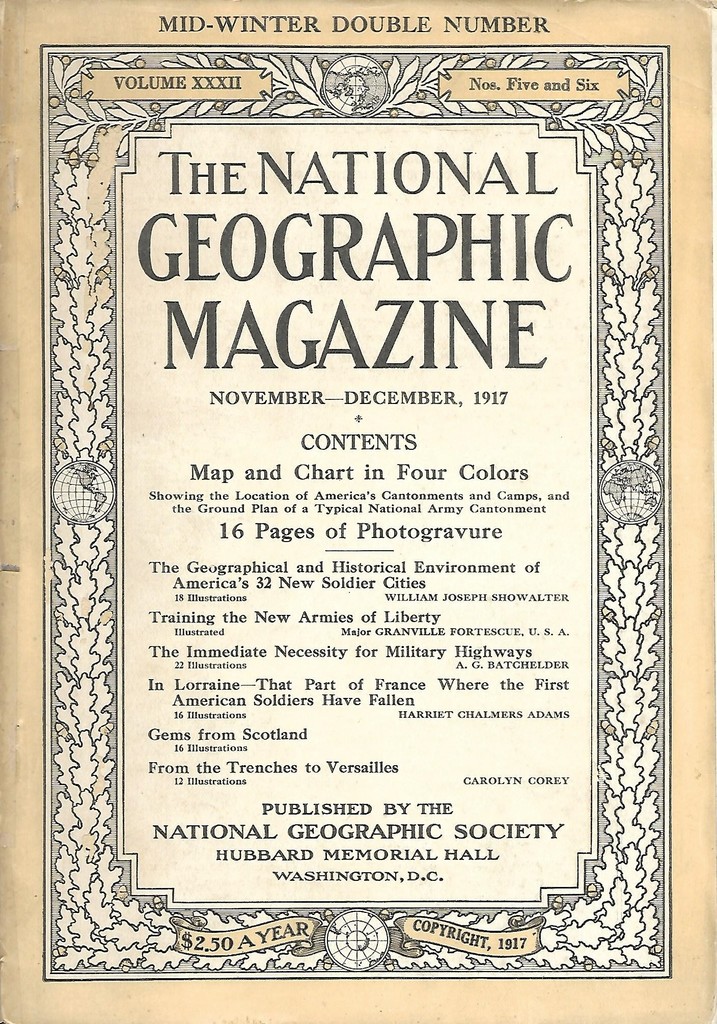 As you can see by the cover this is a double-issue, as shown by an added top banner reading “MID-WINTER DOUBLE NUMBER”, The top right banner reading “Nos. Five and Six”, and the main title including “NOVEMBER – DECEMBER, 1917”.  If you recall in last month’s installment, I mentioned ripple effects from the time and money needed to produce the “Flag Number”.  The time consumed in printing the color pages coupled with delivery delays necessitated the combining of the ensuing two issues.

This was only the second (and last) time since going to monthly issues in 1896 that the Society deemed it necessary to print a double issue.  The only other time was the July – August 1897 double issue: Whether that combining of issues was due to time constraints, money issues, or a dearth of articles is unclear.

Besides the articles listed, the cover of the current issue documents two bonus features in this issue, a “Map and Chart in Four Colors” and “16 Pages of Photogravure”.

The first article in the issue is the second one listed on the cover.  It is entitled “Training the Armies of Liberty”.  It was written by Major Granville Fortescue, U.S. Army.  It has eight black-and-white photographs, of which six are full page.

The article uses Camp Lee, Virginia as an example of the sixteen new “Soldier Cities”, or Cantonments, built around the country.  (I think they used the term Cantonments because “Shanghai-ments” would have been a little too obvious to the draftees.)

The creation of these camps is discussed from planning through construction, with standardization being the key to the speed at which they were up and running.  Each camp is laid out the same with only slight modifications due to geographic and logistical concerns.  The camp’s layout is designed for efficiency.  The Army can take a diverse population of citizens and turn them into soldiers in six months.

The page following the first article is the “Chart in Four Colors” of Camp Upton, New York.  This detailed layout of a Cantonment shows many of the features discussed in the first article.  While it is of a different camp than the article’s, the standardization among them makes the associations easy. On the flip-side of the Chart is the “Map in Four Colors” of the United States partitioned into regions from which the camps receive their recruits.  This map shows the location of all sixteen Cantonments as well as sixteen National Guard Mobilization Camps and other Army Camps (both Regular and Aviation).  This map can be referenced by the magazine’s second article. The second article is entitled “America’s New Soldier Cities” with the subtitle “The Geographical and Historical Environment of the National Army Cantonments and National Guard Camps”.  It was written by William Joseph Showalter.  It contains eighteen black-and-white photographs, with twelve being full page.

After a brief introduction outlining the design and construction of the camps, their operation is discussed stressing sanitation and recycling.  Then the article describes each of the sixteen Cantonments in turn.  Not just the camps but the surrounding cities and towns are discussed.

Then the sixteen National Guard Mobilization Camps receive the same treatment.  These camps were designed and built at the same time as the Cantonments but serve a slightly different purpose.  That is to train existing reserve forces that could later be called up to active duty.

At the bottom of the last page of the second article there is a one-paragraph blurb entitled “Practical Patriotism”.  It mentions that National Geographic Magazines are being shipped to the Y.M,C.A., Knights of Columbus, and Libraries in all the Army and Navy bases throughout the United States.

The third article, “The Immediate Necessity for Military Highways”, was written by A. G. Batchelder, the Executive Chairman of the American Automobile Association.  It has twenty-two black-and-white photographs; twelve are full page in size.

The author discusses the need for a well maintained national road system; primarily for military purposes but also for commerce, which he continually refers to as intercourse.  He envisions great highways connecting states making it a nation.  The need for good roads, especially in the South, where poverty has left them the same as they were during the Civil War, is stressed.  The “soldier cities” have been built but they need to be connected.

He goes on to say that automobile travel is allowing people to visit other counties within their state and other states, giving them a more nationalist view of life.  We like other people once we know them.  Richer counties within a state need to help poor counties with road construction and maintenance; just as richer states must foot the bill for poor states.  This will be done through federal grants to the states for construction.  The tax dollars go to where they’re needed.  But the states need to use the money for interstate construction and not their own needs.

Good roads are needed for commerce as well.  This will help reduce cost and save time.  A study of well-paved roads in Maryland and Virginia shows that automobile traffic far outnumbers horse traffic.  With a national highway system horses can be retired.  Since it takes five acres to support a horse but only three to support a person, this will free up enough land to feed 14,000,000 men, or more than the combined Allied armies.

The author mentions one other benefit of such a highway system and that is tourism.  Each state has tourist sites, be it natural or man-made.  To travel the country and see them brings you closer to nature and to the realization that we are one country.

Article number four is entitled “In Lorraine” with the subtitle, “That Part of France Where the First American Soldiers Have Fallen”.  It was written by Harriet Chalmers Adams, a war correspondent.  It contains sixteen black-and white photos, nine of which are full page.

The author describes her journey from Paris to Lorraine, and then what she found on the Western Front.  Using Nancy, the capital of Lorraine and still in relatively good shape despite the continued bombardment, as a base of operations.  She then traveled to a field hospital and to several towns that were either partly or totally destroyed.

She ends by mentioning her travels across the U.S. and what she sees as an awakening in America.  It is a sense of unity that is making us one nation.  She hopes we will show the same fortitude as the people of Lorraine.

The next item listed on the cover, “Gems from Scotland”, is not an article but the “16 Pages of Photogravure” listed above the articles.  These full-page photo-engravings are black-and-white unlike earlier photogravures in the magazine’s history that tended to be either brown or green in shading.

The last article in this issue is entitled “From the Trenches to Versailles”, and was written by Carolyn Corey.  The article has twelve black-and-white photographs embedded within it. One of these photos, on the last page before the advertisements, is full page and is of the author and her thirty-two “escorts”.

Ms. Corey is a guide for English-speaking troops, mostly in Paris; but three times a week she takes a group of soldiers to Versailles.  She tells the story of one of those excursions with thirty-two men in uniform.

It starts with loading the men, five at a time, into taxis for the ride to the train station.  Next, the purchase of thirty-three tickets (she had forgotten to buy one for herself several times before).  After a thirty-minute train ride, they arrive at Versailles with its palaces and gardens.  Following the tour, the process is reversed and the soldiers are returned to the front.

The last page with its photo of the author is page number 550.  The last article ends on page 548.  A notice appears at the bottom of that page entitled “The Mid-Winter Number”.  It explains that due to the time it took to print the October issue along with shipping delays, it was deemed necessary to combine the November and December issues into one.

Page 549 is not part of the last article, but instead is a letter written and signed by the President of the United States, Woodrow Wilson.  In it he commends Gilbert H. Grosvenor for the production of the Flag Number, and refers to it as a “very valuable document”. As mentioned in the title, this review has a “First Page Banner” variant.  While the cover to this issue has been labeled correctly, in the earlier prints of this issue the banner on the first page has the issue labeled as Number 5, November 1917.  Apparently, this page was already typeset before the combining took place.

Somewhere during the production run, this mistake was caught and corrected:

This correction occurred somewhere around the middle of the print run since both versions of the First Page Banner are readily available.

Ironically, this was the second time a mistake like this occurred.  The first time was again in the 1890s, February 19, 1892 to be exact.  This issue was during the “Red Brick” era of the Magazine, before it became a monthly.  While Volumes I and II were designed as a quarterly, Volumes III through VI used a “Brochure” format with the date including the day.  This was done in case more than one issue was published in the same month.  Apparently, the first article (with map) was ready to go as a stand-alone brochure on January 28, 1892.  After printing, but before binding, more articles, the volume index, and appendices were added.  The First Page Banner over the first article was never corrected to reflect those additions:

What the banner should have read was:

Due to the short production run (only 474 members at the time) this mistake was never corrected.

While there never was a January 28, 1892 issue, the practice of removing covers during the binding of volumes caused enough confusion that, in the 1888-1946 cumulative index, all references to the first article included both dates in their citations.  References to the other articles and appendices only cite the correct, later date. 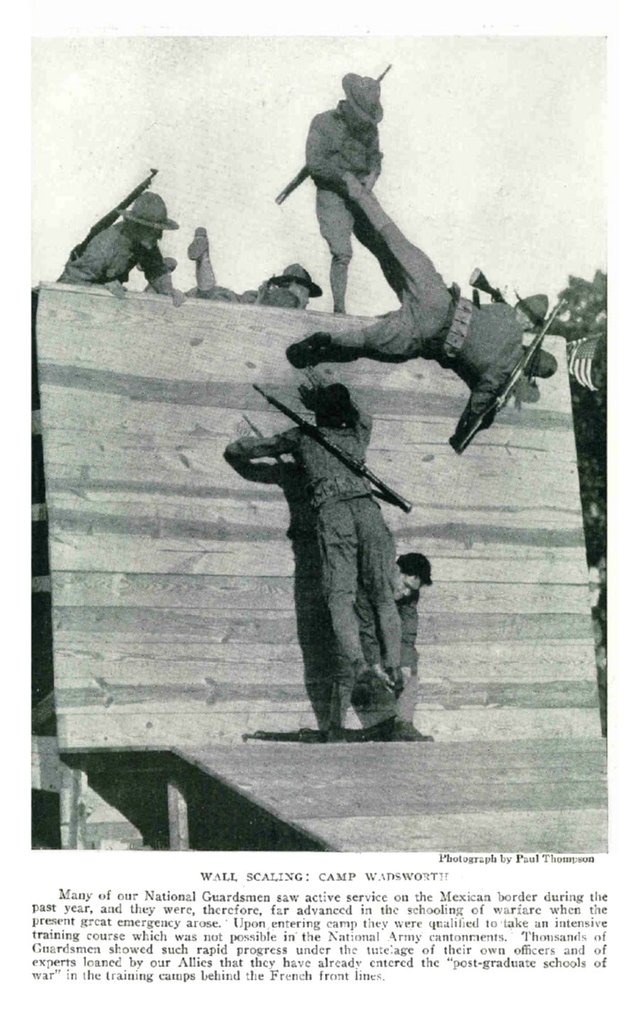 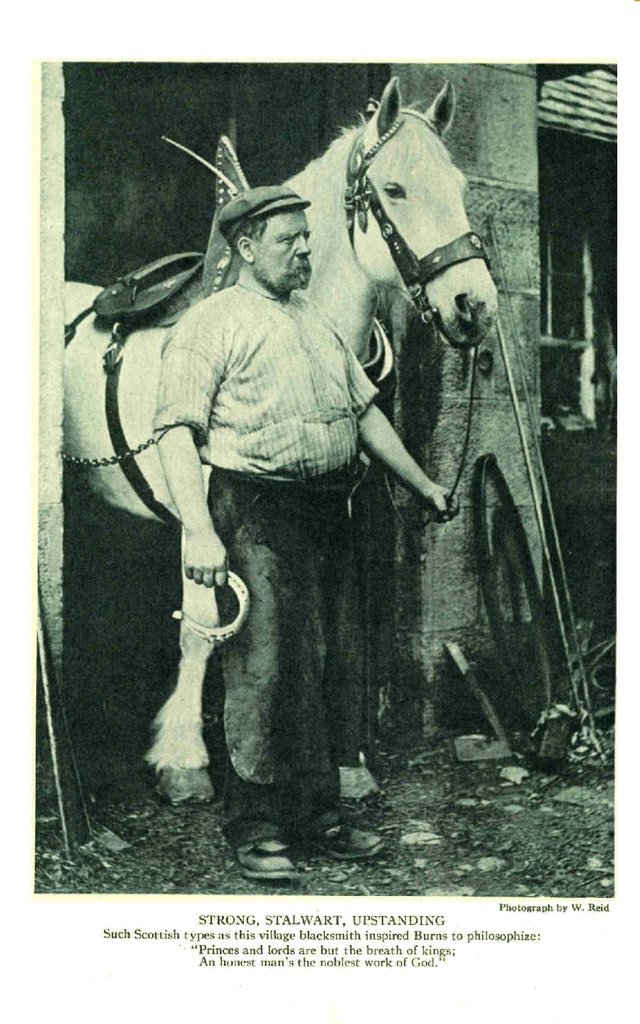 I have the Nov-Dec banner in my copy.

Great article! I must get to reading your other submissions.

I hope you enjoy them.  Most aren't as good as the last two.