This is my 24th brief review of a National Geographic Magazine issue that has reached 100 years of age. As you can see from the cover there is only one article in this issue and it is all about Australia.  The article “Lonely Australia, The Unique Continent” by Herbert E. Gregory is 96 pages long and contains 80 illustrations.  Eight of those illustrations are maps, one is a chart, another is a drawing, and the rest are black and white photographs.

The article starts with a description of Australia’s location on the globe and its isolation from everywhere else.  It then goes into how different Australia is from its neighbor, New Zealand.  If one word could describe Australia, that word would be primitive.  The plant life is unlike anything found in Europe, Asia, or the Americas except in the fossil record; the animal life is marsupial and even more primitive; and the indigenous population is referred to as “the lowest in intelligence of all human beings”. With the help of maps on pages 476 and 477 Australia is then compared to the United States of the time (i.e. the lower 48) both in size and inverted latitude.  Its history is linked to America as well with its discovery coming just prior to our revolution and the subsequent settling of the continent by England in place of the American colonies.  The hardships face by the early settlers, especially in exploring the interior is documented. 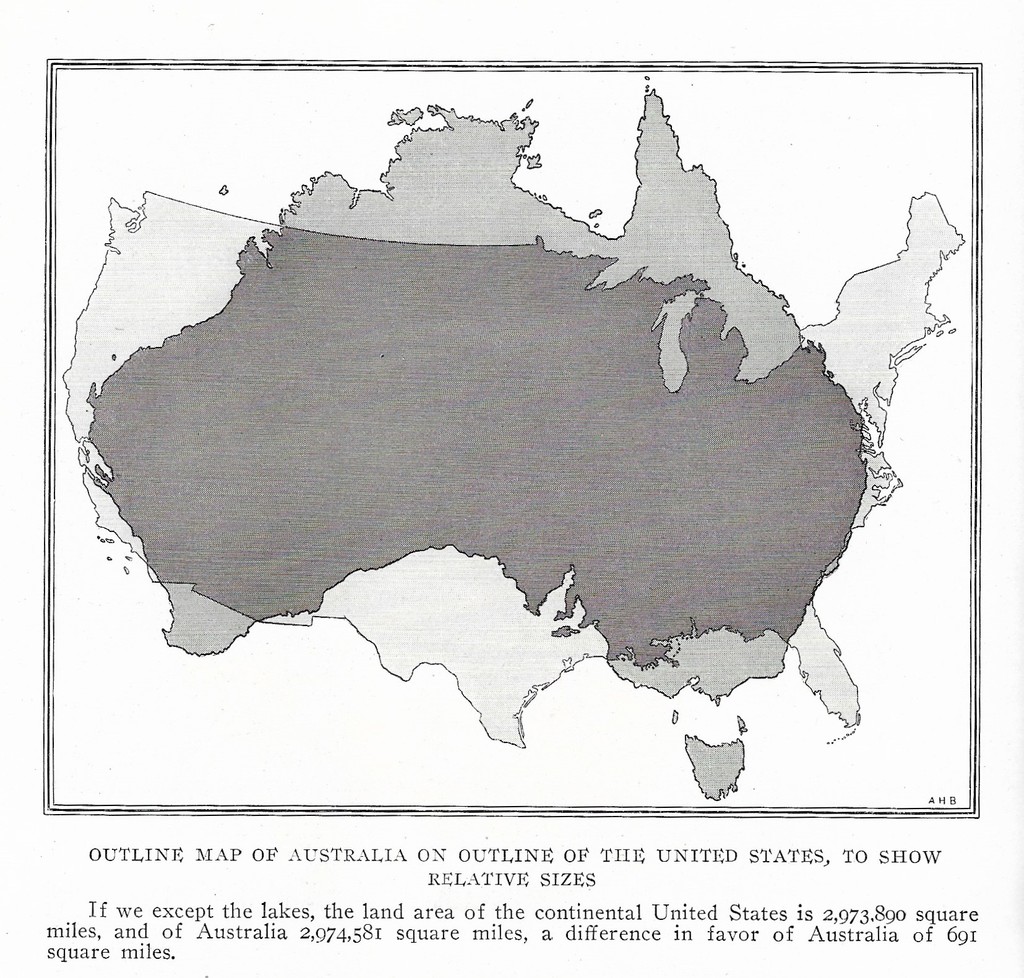 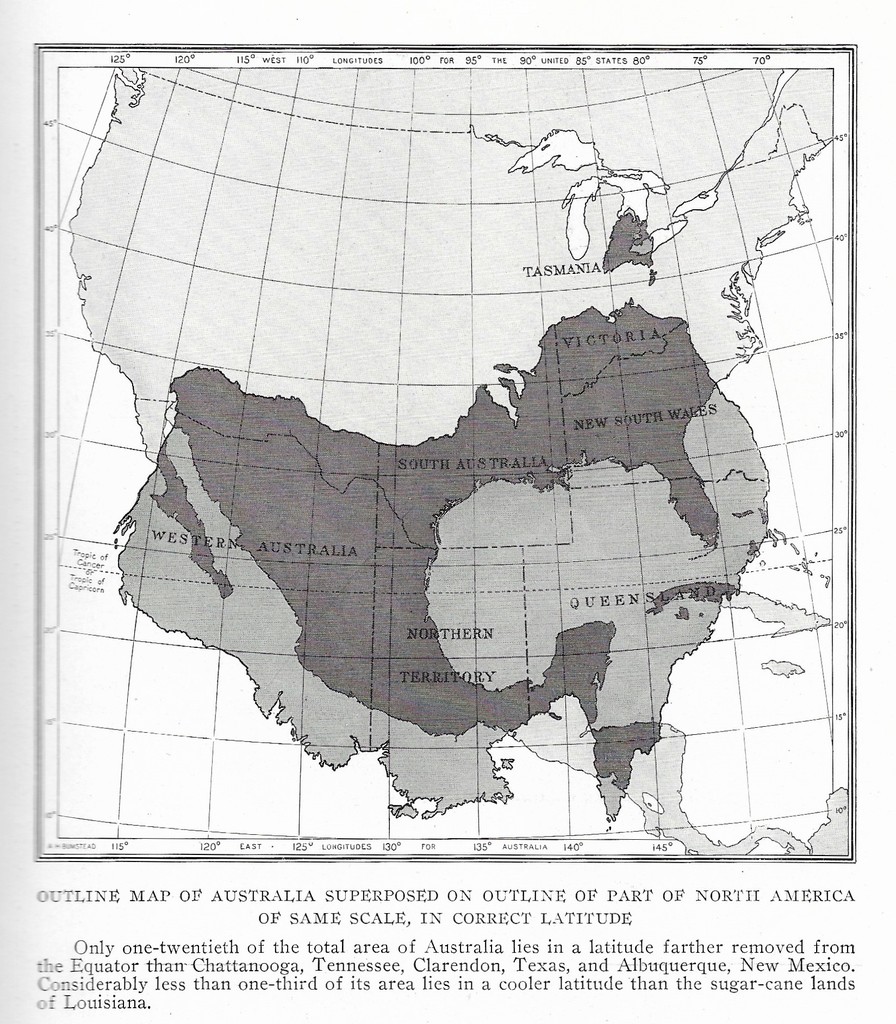 The flora of Australia is then discussed in detail with the gum tree, or eucalyptus, serving much like Darwin’s finches in as much as they fill many of the environmental niches that a variety of different species do elsewhere in the world.

The fauna is explored with lizards and snakes, egg laying mammals (platypus and spiny anteater), and the large variety of marsupials including kangaroos, Tasmanian devils, wallabies, and koalas to name a few.  Birds are then discussed including the lyre bird with its famous plumage, magpies, “Jacky Winter”, “Willy-Wagtail”, and cockatoo.  Other birds include the kookooburra, or laughing jackass, the jabiru, the mallee hen, the cassowary, and the emu.  The article includes a disturbing photo of two keas, or mountain parrots, killing a sheep.

Next, the Australian aborigines are discussed with descriptions of appearance and habits.  Their hunting skills including the boomerang are touched on.  Also, their lineage is referenced as being Indo-Aryan, or Caucasian.

The article then shifts to the white population of Australia.  With the interior of the continent being a desert and lacking major rivers, most people live near the coast.  The immigration policy of Australia, for the most part, is whites only making “a homogenous people of British origin”.

The nature of the “Three Australian Cities” are discussed.  Sydney has grown spontaneously and not according to a previous plan.  Melbourne’s appearance “speaks of ambition and faith in the future and reflects the exciting epochs in history of Victoria”.  Adelaide is laid out with a business section surrounded by park lands beyond which are the residential section putting business, recreation, and home life in separate compartments.

The article goes on to describe the Bush, or back country, and into sheep raising and the wool and meat it produces.  This includes the politics of this mega-business.  Then it’s on to cattle ranching and the difficulty incurred due to the arid conditions and vast distances involved.  Next rabbits are discussed as pests and the thousands of miles of rabbit-proof fences used to keep them in check.

The harsh geography of the continent is reviewed ranging from the tropical coast in the north to the desert in the center.  The need for water and the many wells dug in the vast artesian basin are mentioned.  In 1862, camels were introduced to help traverse this foreboding and desolate region.

On the heels of the San Francisco gold rush, Australia had one of their own.  The mining for gold, silver, and other metals is documented.  This includes the building of a 350-mile long pipeline for water to one of the mining regions.

The government is discussed starting with its immigration policy and the into the decentralized nature of the commonwealth.  The federal government address a few essential tasks: military, post office, and such but the rest is left up to the individual states.  This has led to many problems such a rate wars and the incompatibility of the railroad lines with each state using a different gauge.

The article would not be complete without mentioning Australia’s contribution to the Empire in the Great War, and the Boer War before that.  By June 1916 nearly 300,000 volunteers had crossed the seas to fight for England.

As mentioned before there are several maps of Australia throughout this article.  As well as the two mentioned above there is one on page 475 showing its location and its trade routes.  On pages 480 and 481 there is a main political map of the continent. 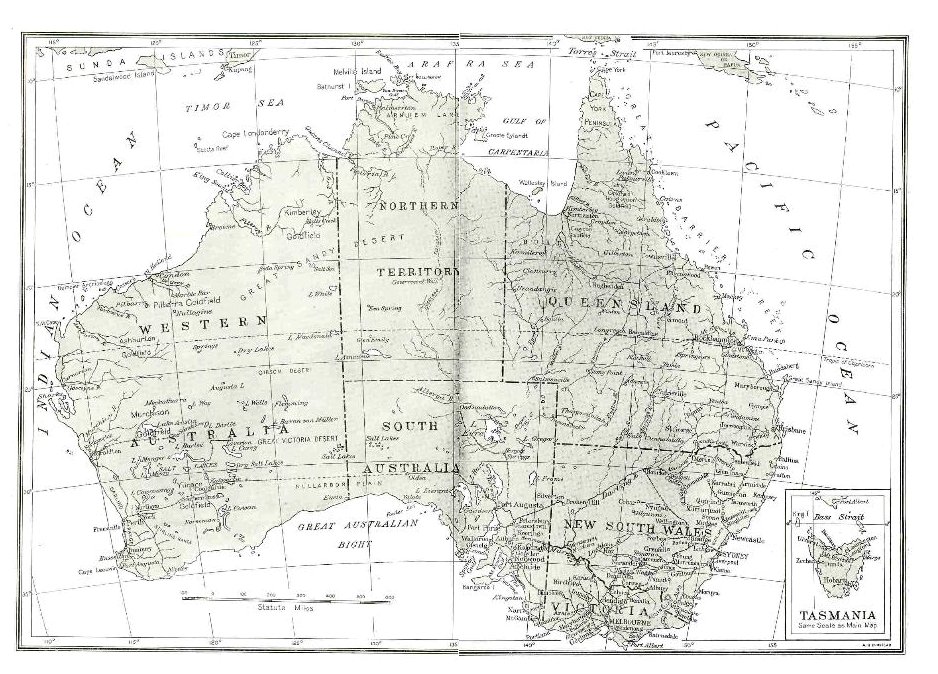 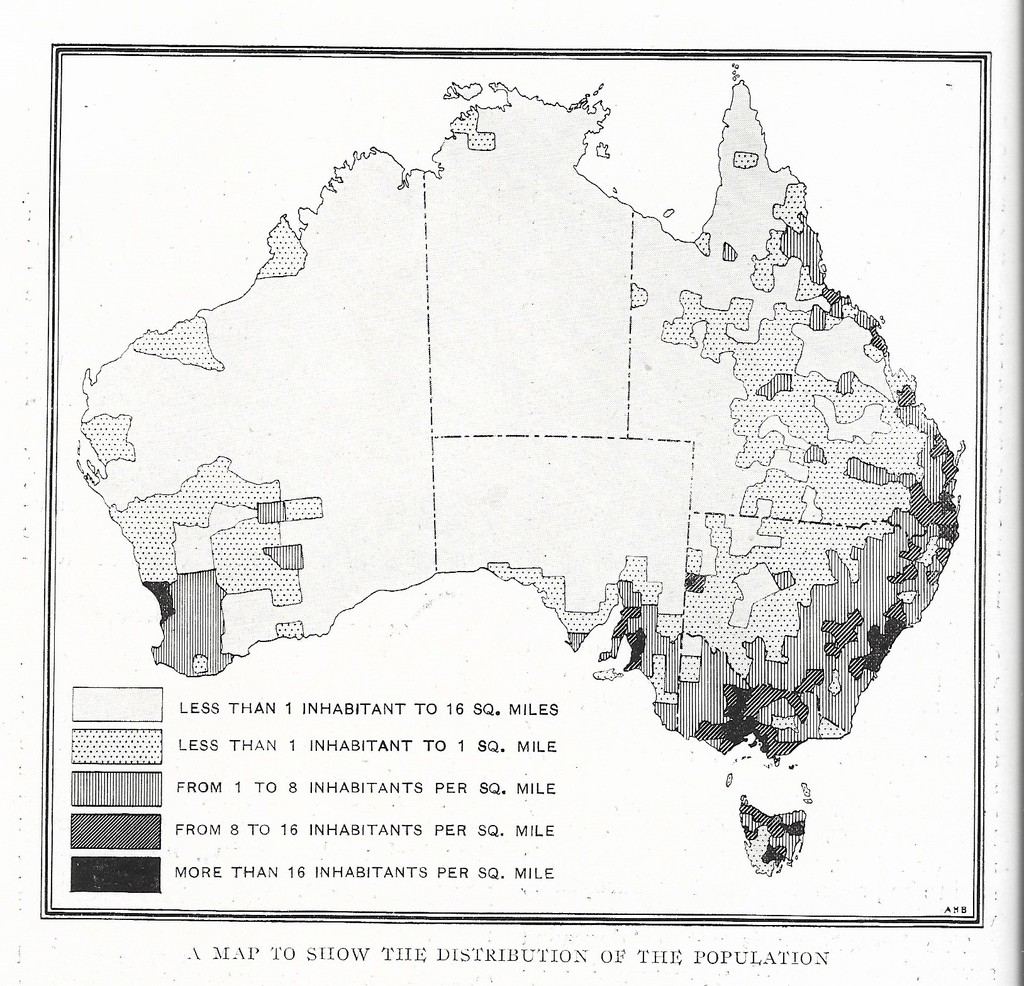 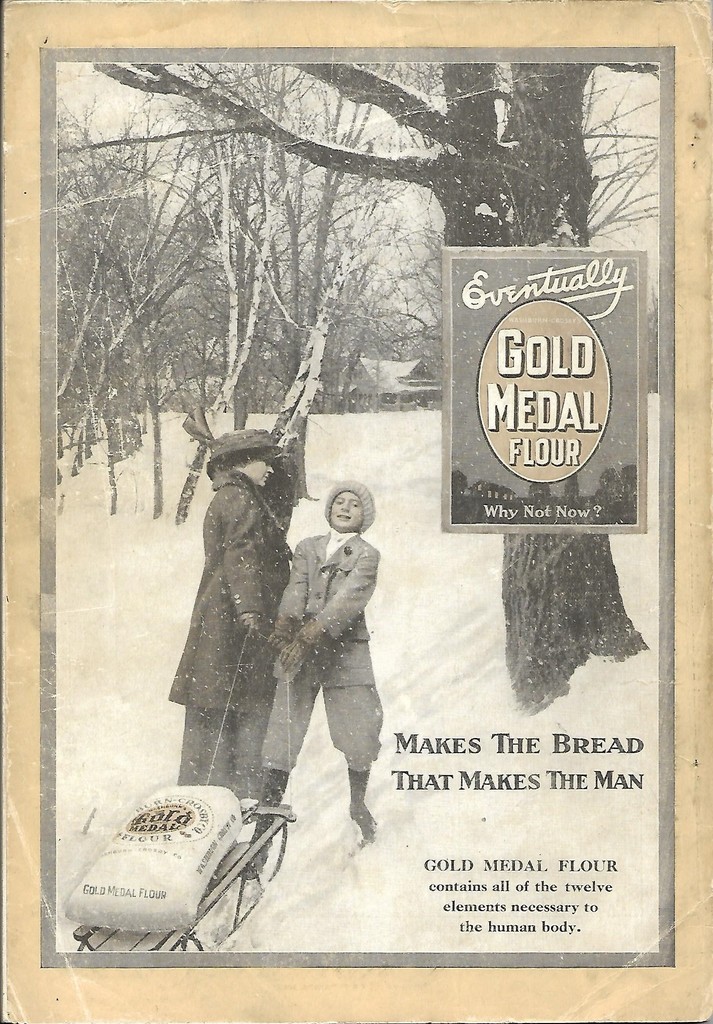 February 1988 issue of NGM makes an interesting companion to this issue, being the single-topic bicentennial of 'Down Under' issue (err, politically at least). 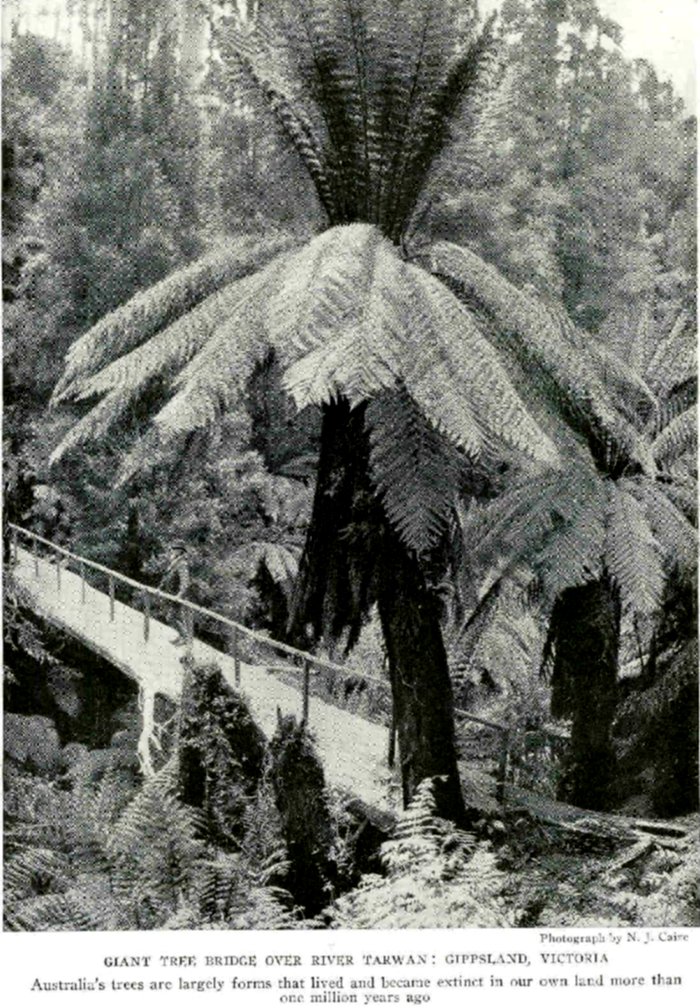 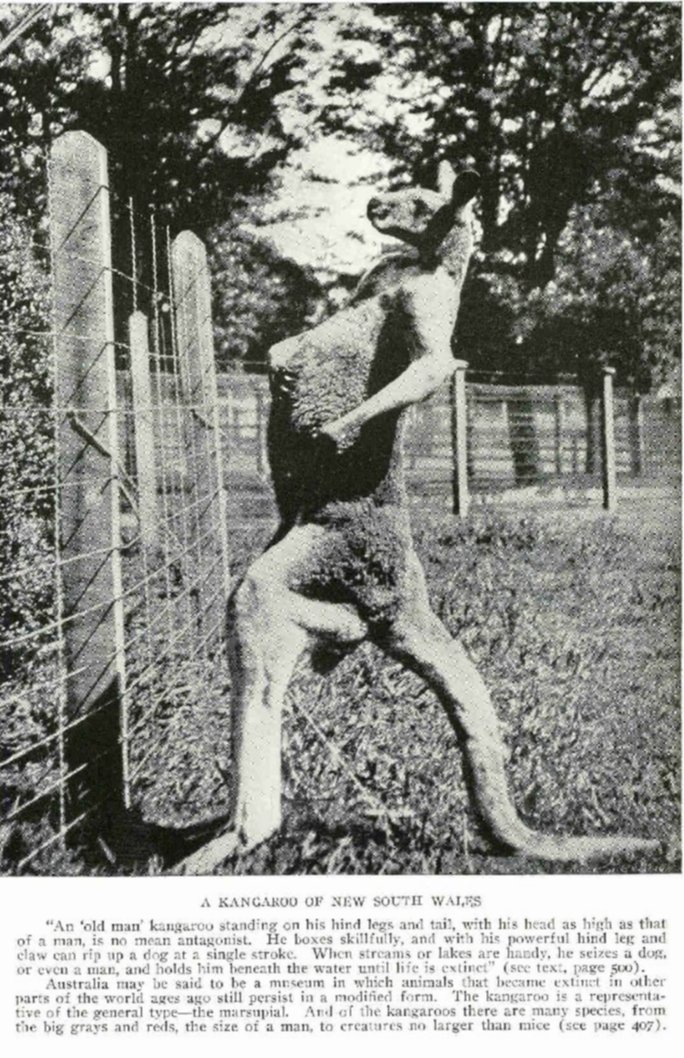 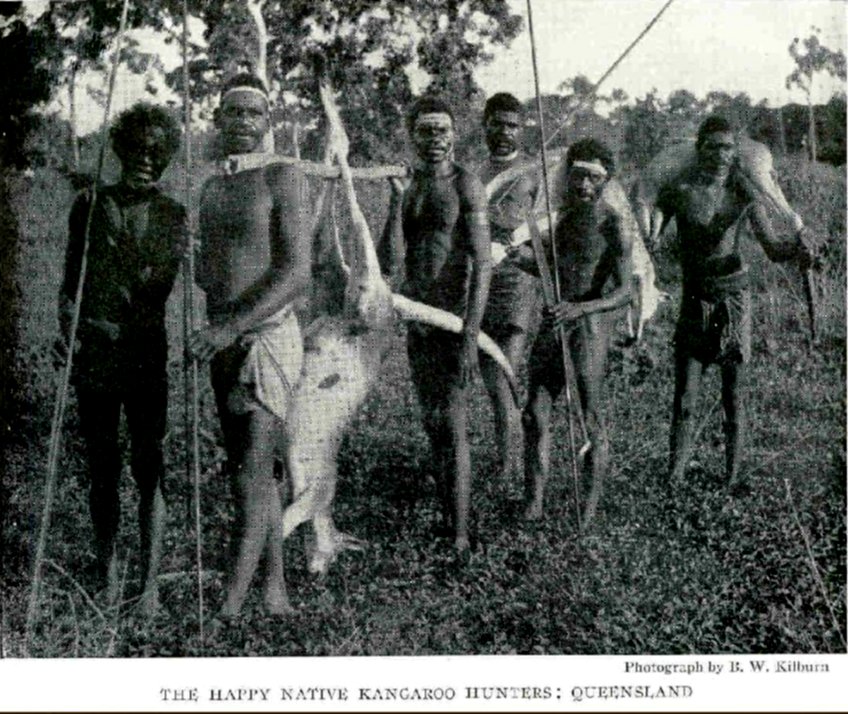 Note: I just added a map reference by the article in this review.