This article is the eighth in a series of brief reviews of 100 year old National Geographic Magazines. 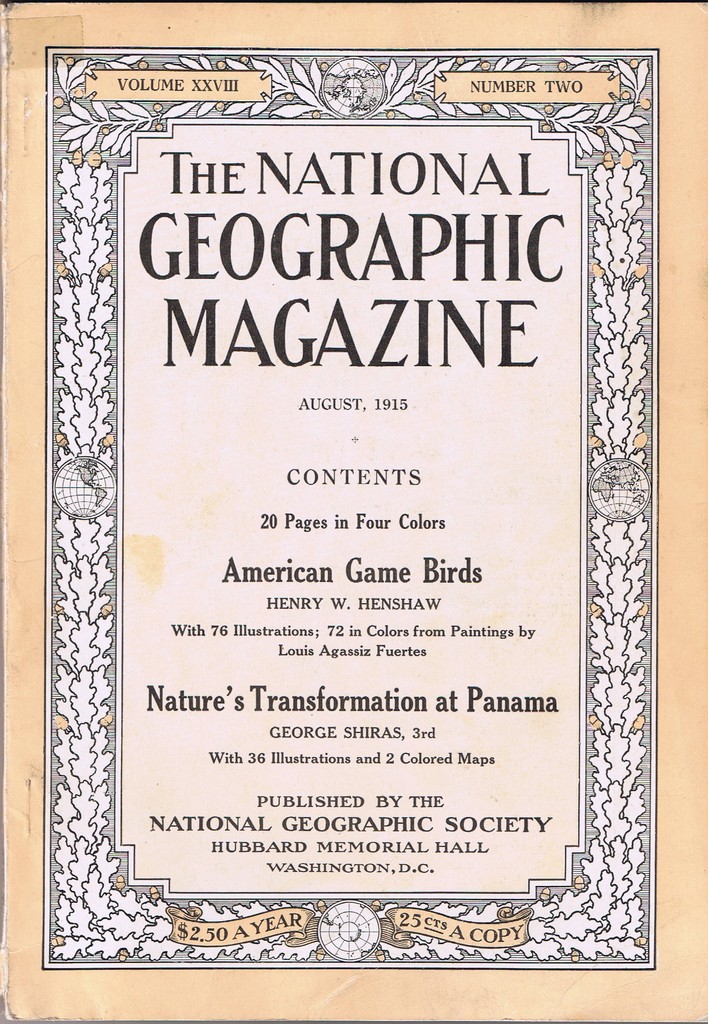 This issue's cover promos "20 Pages in Four Colors".  Eighteen of those pages are in the first article "American Game Birds" by Henry Henshaw.  The article discusses the abundance of game birds in North America's past and their rapid depletion due to over hunting.  It then goes on to discuss state and federal laws in place to protect this natural resource.  It ends up discussing options to support this goal: preserves, captive breeding, and such.

Four pages into the article, an NGM field guide breaks out.  This guide is much like the Peterson series and has, for the most part, alternate pages of bird drawings and descriptive information.  The 18 pages of art have 4 pictures each making 72 color illustrations of birds (some having more than one bird type).  These illustrations were painted by Louis Agassiz Fuertes.  The description of each bird has a common name follow by its Latin genus and species.  Next is a short paragraph describing the bird's range followed by a longer paragraph describing the bird's appearance, habits, and diet.

After the field guide the article picks up again for several more pages.  The last page of the article is an alphabetic index of all the American game birds each with page numbers for their picture and their description.

The second article "Nature's Transformation at Panama" by George Shiras, 3rd is mainly about Gatun Lake, the man-made, 164 square mile lake deeper than Lake Erie.  This lake is the key to making the Panama Canal possible.  After a brief history of the lake's creation, the author goes on to describe his exploration of the lake and its surroundings by houseboat.  Many specimens both alive and dead were collected, and many more were photographed at night using flash traps.  Since the lake exceeds the 10 mile width of the Canal Zone, the author ends the article with the need for America to purchase its shorelines from Panama for public health and security reasons.

The article contains two maps of central Panama, one before the Canal and one after its construction.   They are on pages 180 and 181 and are the last two pages in color. Note: I found a typo on page 175.  The title for an article section on that page reads "Pat Caves".  It should say "Bat Caves".  The Volume XXVIII index does not contain an erratum so I do not know if this mistake was ever caught.  Since I only keep one issue, I don't have a clue whether this was corrected on a later production run or not. Apparently they caught the error during production and corrected it.

Note: I just added two maps to the second article in this review.  (Thanks Phil)