my father was a NG collector. I have 1969 through 2000 for sale. Excellent condition.

Unfortunately, I am down-sizing, and have no choice or I wouldn't be posting this, but I have to say goodbye to my collection of magazines, started for me by my aunt and added to continuously since by me.  Each year is wrapped and ready for a new owner!  Contact me through my email address to discuss details.  Susan Mayben

I was going to throw these away but I decided to see if there was any interest in these older magazines.  They are in fair condition, usual dust and dirt from being in a book shelf for years. I believe they are complete, no missing issues.

Hi There! Just receive my ebay item - Babes in the Wood or aka The Forest Family that comes with the August 1917 National Geographic magazine. At first I thought this is just an ordinary photo. Upon inspecting this photo - I realise this is a photogravure photo.

I have a collection of NGM that are in like new condition.  All added Maps, Records and other data are in the corresponding issue.  Missing is 1 map of California.  I have added a link for you to view the collection.  It is laid out by year and in month order.  I would like to sell the collection. I am located in California.

I have a collection of NGM that are in like new condition.  All added Maps, Records and other data are in the corresponding issue.  Missing is 1 map of California.  I have added a link for you to view the collection.  It is laid out by year and in month order.  I would like to sell the collection. I am located in California.

Is anyone looking for a complete collection from Jan 1924 to present?

I have the following National Geographic Magazines available for purchase:

Also have the following National Geographic Maps available for purchase:

We are in the process of moving, and have a lot of full year magazines for sale. If interested, please give us a call.

From the early 1990s to the present. Issues will be donated anywhere in the Los Angeles area.

I am trying to find a good home for my father's National Geographic magazines. He packed them well. They date from the early 1930's to the 1970's and maybe some from the 1980's. They are in a cinder block building just east of Dripping Springs, Texas. I am from Austin, Texas but live in Boise, Idaho. My mom is in her…
Continue

Collection of National Geographic Mags- August 1964 through present, for sale

My 92 year old mother in law has been saving every issue of National Geographic  since August 1964 through present day, all neatly stacked on shelves in her home in Oregon. Please contact me if you have interest in purchasing the collection, all in like new condition.

Hi, I have a copy of the December, 1988 issue of NG that I would like to sell.  It is in fine condition.  Please make an offer if interested.

My family is selling a complete collection of the National Geographic magazine from 1965 until 2014. Anyone interested please contact me at mdurand65@gmail.com. 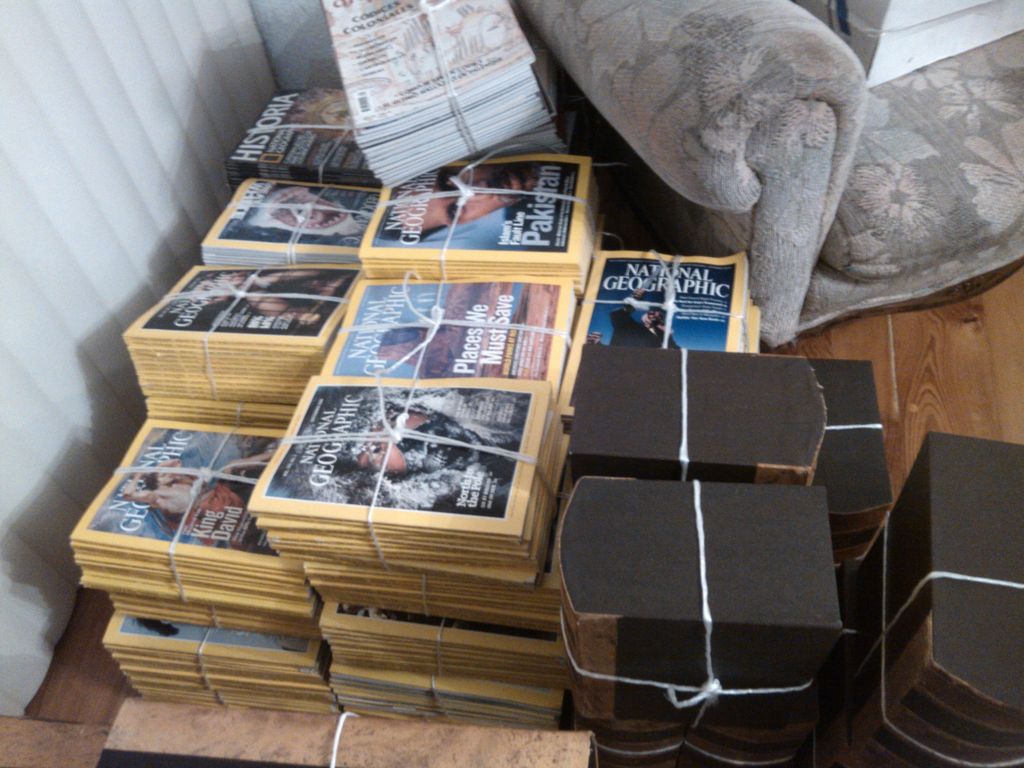 I am from Argentina, and I have some old "The National Geographic Magazine" for sale, but i don't have any idea of the price they have...So, y put here the list, with date and number of every magazine, and i hope any collector could help me. Thanks!

I have the following National Geographic magazines available that I would like to sell,  I am willing to sell individual or as many as you wish.  All are in very good shape, some are still in the envelope they were mailed in.  It really would be a shame to toss.  I also take ideas!!!!

Thank you and hope to hear from someone soon!!!!

1952 to present back issues available!

Although there are a few missing issues, we have a collection of National Geo magazines from approximately 1952 to the present available to keen collectors. Available as a full or part collection. You just pay the postage and we'll get them to you! Our entire family over three generations have enjoyed them so much, so we hope someone else will enjoy them too.