I recently acquired a copy of Insignia and Decorations of the U. S. Armed Forces, Revised Edition, December 1, 1944. This is a 208-page compilation of several articles from National Geographic Magazine providing background information for the “2,476 Reproductions in Color” contain between its covers. 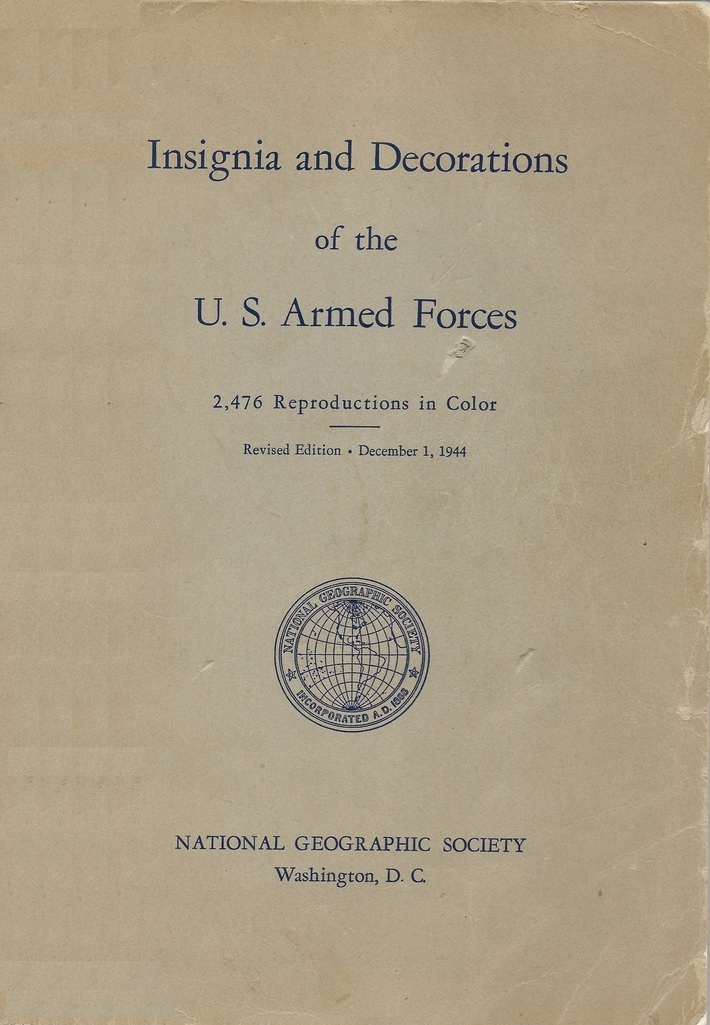 The articles included in this compilation are from three issues -

“The Traditions and Glamour of Insignia”

“The Heraldry of Heroism”

“Heroes of Wartime Science and Mercy”

In his book, “Collectibles of the National Geographic Society”, Roger E. Nathan list this item, as well as three others as article reprints. Together, these four article reprints represent an evolving document. They are listed on page 21 –

• Insignia and Decorations of the United States Armed Forces – Dec. 1943

The first two items are individual article reprints containing 991 and 376 color reproductions respectively, while the second two are a combination and expansion of the first two. The 1943 compilation contains 156 pages, including eight pages of changes and additions. The 1944 compilation is a 208-page revised and enlarged version. [He mistakenly identifies the articles included in the revised edition as being from June, October, and December of 1944.]

Interestingly, Nathan references the book section of his guide in his citations of the two compilations in his list of article reprints. Sure enough, he lists both as books on page 73. This led to my question in the title: is it a book or an article reprint?

With Nathan being ambiguous on the subject, I turned to Edwin C. Buxbaum for additional information. His earlier works from 1935 and 1956 were of little help, but his 1962 book “Collector’s Guide to the National Geographic Magazine” lists both of these items as books on page 254. He lists the 1943 version as having 1,702 color reproductions compared to the 2,476 in the 1944 revision. He doesn’t list article reprints in this book, but only defines them.

In his 1971 edition of the same book, Buxbaum adds fuel to the controversy by again documenting the Insignia and Decorations compilations as books (page 313) but also includes them in his short list of article reprints (page 89). [He gives the items the correct names in the book section but entitles them “The Complete Insignia” in the article reprint list.]

So, both Nathan and Buxbaum could not decide whether the item I recently acquired is an article reprint or a book. They both list it as both. Don Smith in his 1996 “National Geographic Magazine: For Collectors” lists both compilations as books entitle “Insignia’s (U.S. Armed Forces)” on page 37. He also has a picture of the revision’s cover as one of his photos between page 37 and 38. I can find no mention by him of the item as an article reprint, but he doesn’t list any article reprints, only defines them. So, the tally is three votes for book and two for article reprint with one abstention.

The Society early on set rules for the reprinting of articles which they called ”Irregular Publications”. One of these rules states: “these separates bear the original paginations and a printing reference to the serial and volume from which it was extracted”. Other article reprints from the time follow this rule, these compilations do not. Not only do these books make no reference to the original magazine issues, but they are also repaginated starting at page one.

Bottom line, if I had to choose which it is, I’d go with book. The only reason I wanted to make a more or less definitive decision is as to where I was to post this little article, (although I’m still counting it as part of my article reprint collection).