Two-Sided Alaska/Top of the World Map

About a month ago, I notice a two-sided map for sale on eBay.  On one side was Alaska and on the other was the Top of the World.  It was dated 1971.  I immediately checked Roger Nathan's book to see if I could find information in the chapter on maps.  I could not find any mention of a reprint or revision for either of the "classic" maps nor for either of the Atlas maps.

Curiosity got the best of me, so I bought it.  I wanted to see if they were in the "classic" or Atlas style.  Once I received it, I compared them to the maps in my collection and found them to be revisions of the Atlas series maps.  The only difference on the Alaska map was the positioning of the map title.  On the original Atlas map, the title is located in the ocean below the State while on this revision it is located to the side in Canada. 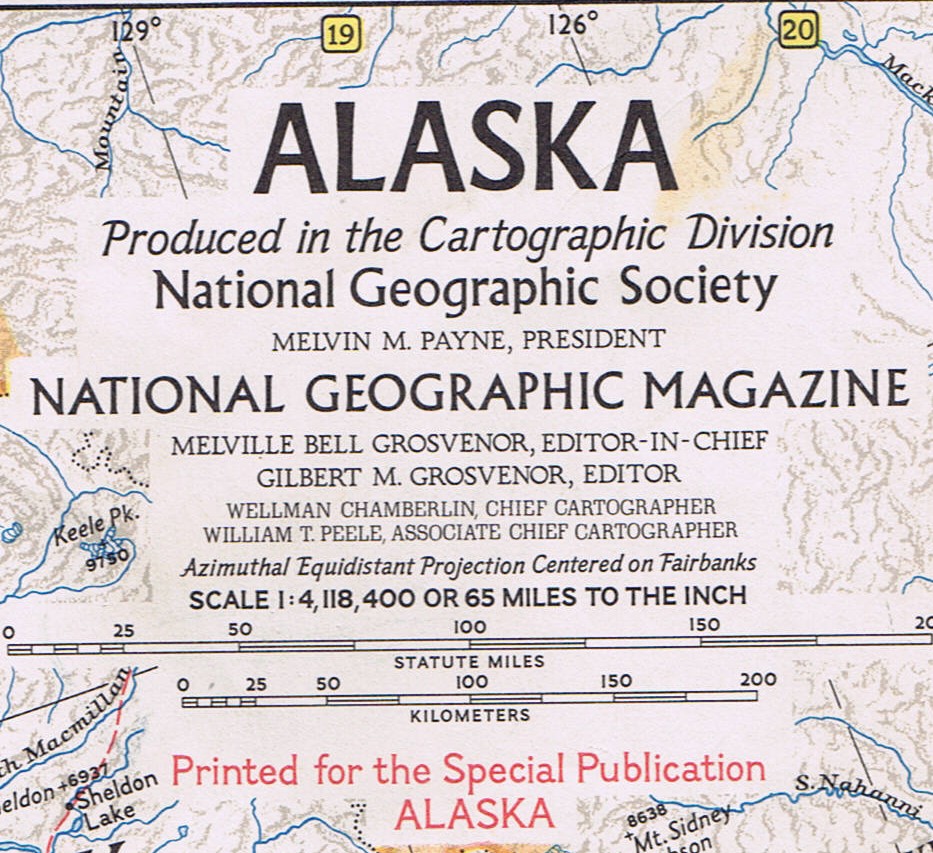 This map title also provided the answer to the question of these maps origin.  They are a supplement to the book "Alaska" published as part of the Special Publications series.  (See Nathan page 82)  Several book in this series have map supplements.  I do not know if any others are two-sided and, since I do not have the book, I do not know if the book contains map indexes for these maps.  The maps themselves do have the standard letter/number grid for indexing.

If anyone has this book, could they please let me know if it contains a map index (or two).  I'm just curious.  Thanks.

Yes, that is indeed the exact map that is in the Alaska books. (1969).  In addition, my website has a listing of all the special publications and/or if they had a map.  ( got to: http://jbcarey.net/)  click on the NG stuff for sale, then Special Publications and find the list of them and a list I have for sale as well.

I have an extra "Alaska" special pub book with map for $6.

All the Best to everyone for a very Merry Christmas....... John Carey

Thanks for the confirmation, John.  Currently I am not interested in collecting these books.  I just thought the map was interesting.

No, the Special Publication books (or other classic Book Service titles) do not contain their own place-name Index for any map supplement --if any-- they contained.

It was especially common during the 1966-latter 1970's for the Special Pub's to have a map insert (Canada, Alaska, Soviet Union, Civil War, Pacific/islands, etc.). The habit of doing this tapered off though. Also, the general books...the Book Division...also commonly had extra map supplements [or sometimes a poster, a reprint article!, a print of a photography, etc.]. Even the Books for Young Explorers (....World Explorers) often had posters, maps, inserts, etc.).

Again, over time, this practice also tapered off, and almost stopped completely, save for a fluke here or there in the 2000's, 2010's.

It's funny timing your mentioning this Tom, since literally I put a map on my laptop last night to post today: the 2x sided Pacific Ocean map that was an insert for the Spec. Pub., "Isles of the South Pacific" , 1968.

For the Special Publications series (1965-2009, R.I.P.), the map supplements were precisely de facto reprints of the Atlas plate maps, as per what would be "relevant" to that book . . . again, Canada plate for Canada book, etc, etc.

These were usually --but not always-- double sided, such that once in a blue moon, you have an anomaly such as yours, where it is essentially 2 separate plate maps put together, simply because they meshed nicely. Always these maps bore some red-line text "Printed for________" , or as often as thus "Printed especially for________" . It was not unheard of that they may have had minor corrections, billed as "Revision", also.


The other funky timing of this is that this past 2 weeks I have brought all my miscellaneous boxes and folders of papers, ephemera, maps, posters, supplements, newsletters, and on and on home to finally do a major sort, clean-up, and reorganization [think: sort, bag, tag!]. It has been my hope to finally set a goal of starting to photo and share and discuss these things in & during 2015. Since Aug/Sep. I have been (re)doing my list of all/any inserts/supplements that have come with the NG books over time.

I know there's been a comment here or there in the past by members that they don't pay attention to the non-NGM maps+supp's for various reasons, but it's something I've really really been wanting to delve into and hopefully ignite some discussion interest, or perhaps gain some converts from those traditionally just into the NGM supp's.


I have 3 new groups (open settings) I have been intending to create by month's end, and something about these book inserts was one of them. I've been trying to get my piles and doc.'s settled so I can see what I am wanting to focus on, and been meaning to get some input from others and yourself about where you think it is best to establish certain discussions and/or photo albums, whether in the Groups, or as main Discussions. Part of it I don't want to separate photos from the overview "essays", but I'm not sure I have a choice.

I just wish there was a better way to segregate and group photos on the 'Corner, so that you don't just have one massive hodge-podge of unrelated photos (even when you create photo albums within your own My Page, it doesn't then extend to the "all photos" structure. Hmmm.

I look forward to your posts (photos, discussions, groups) on these subjects.

As for the question of whether to post a discussion in a group or as a main discussion, I guess it depends on the audience you wish to reach.  I had asked that very question a while back and the consensus was use the groups when the topic was related to the group.  That's why my last post re: a two-sided map was posted in the Maps, Supplements, and Index group.

As for photos, I tend to link them in my discussions and also post them in the photo section.  That way the photos are both in the group for reference by group members and available for viewing by everyone on the "Corner".