I know all of you are as pleased as I am that that the Cartography department has begun to publish new loose supplement maps with the magazine.  Now that their number has reached seven, I am really starting to feel that they are back to stay.  (I hope I don’t jinx this.)

I am going to present a brief description of each with personal observation.  Then I was hoping that other map lovers will weigh in on the topic.

The first “new” map was shipped with the November 2015 issue.  This was after a 38-month span where no maps were issued.  The map is of Amazonia with a related poster (not shown) on the flip side.  The map is tied to the main climate article in the issue and that article is red lettered on the spine of the magazine as “Climate Issue”. 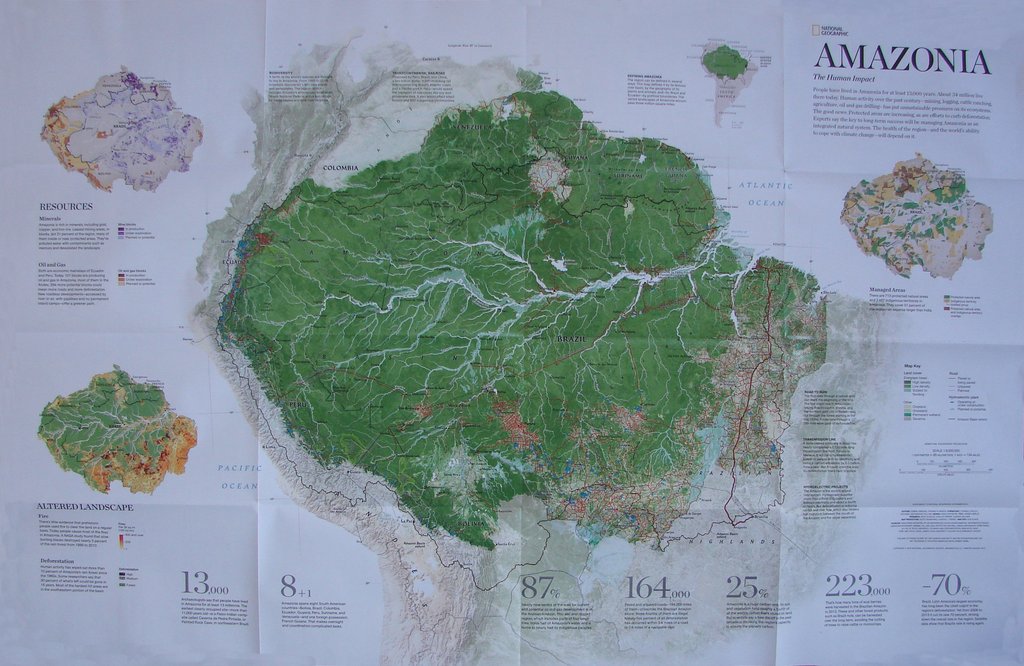 The second of these maps came with the May 2016 issue and is of Yellowstone National Park.  It too has a poster about the park on the back (again, not shown).  This map is also linked to the main (and only) article about Yellowstone.  The article is red lettered on the spine as “Special Issue”. 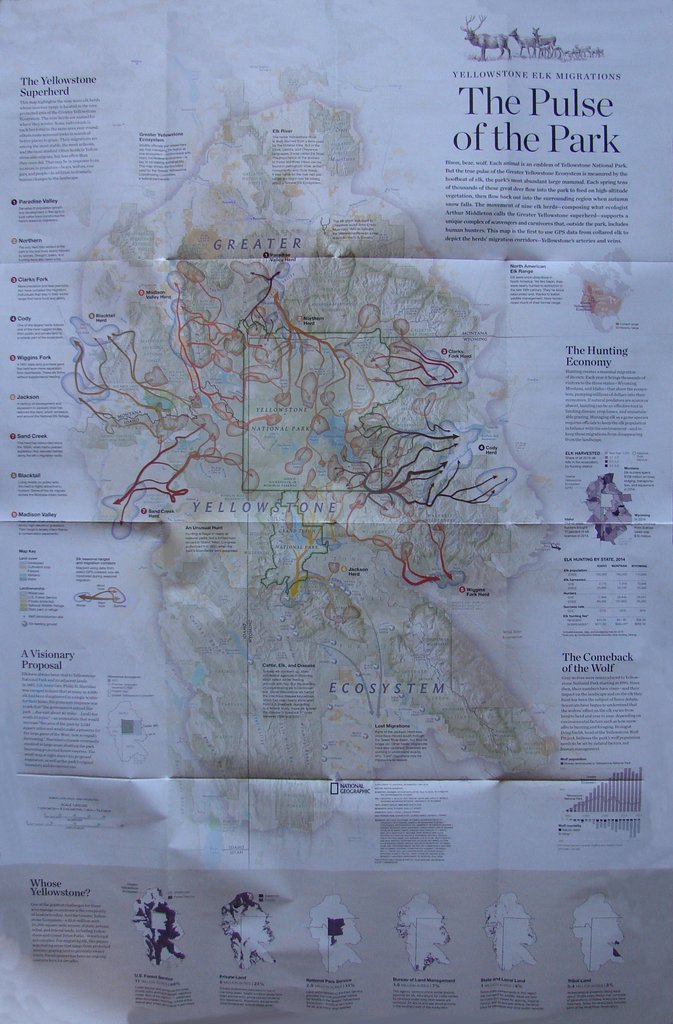 The third map is from the September 2016 issue and is of British Columbia.  It has a poster on the obverse of the warming Pacific Ocean.  While the map/poster combination is linked to an article in the issue entitled “Ocean Warming”, it is not red lettered.  The poster is referenced on the cover as “The Pacific Coast, Free Poster Inside”.  That is to say, the poster (not shown) got top billing, not the map. The fourth map is from the November 2016 issue and is of the planet Mars.  The flip side is a poster of a Mars colony aptly entitle "Colonizing Mars".  There is no red lettering on the spine of the magazine nor any mention of this supplement on the cover.  There is, however, a reference to this item in the table of contents.  The map has every landing site for Mars spacecraft, both successful and failures up to the publication date. 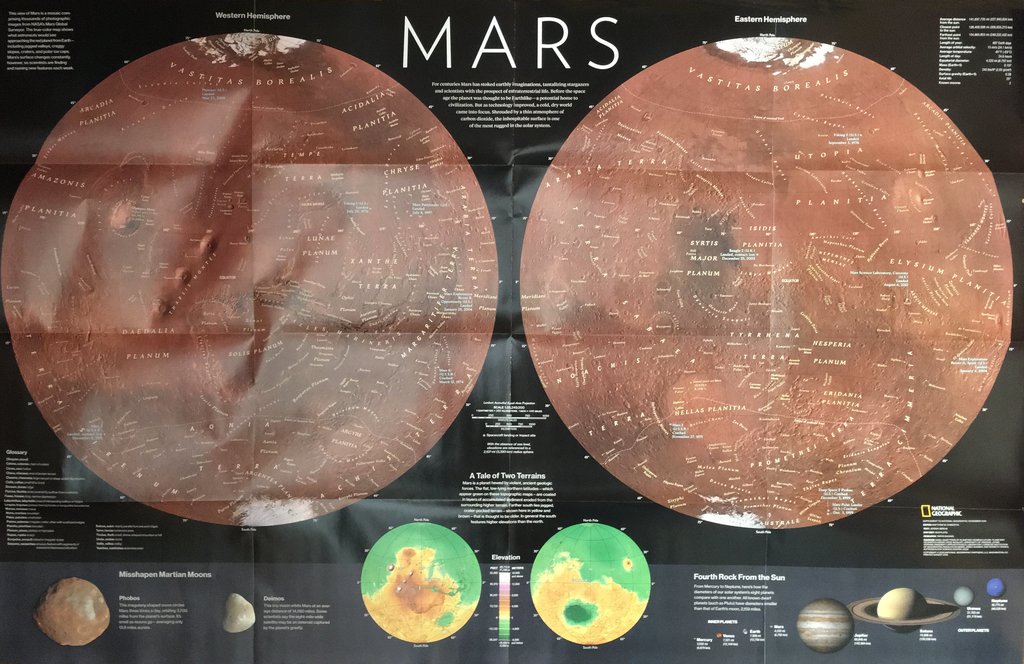 The fifth map in this new series is the first two-sided map in a long time.  It is from the December 2016 issue.  Instead of a poster on the back there is another map as part of a poster.  The map itself is of the lower 48 states and shows different habitats.  The smaller map on the back is of Ulster County, New York. 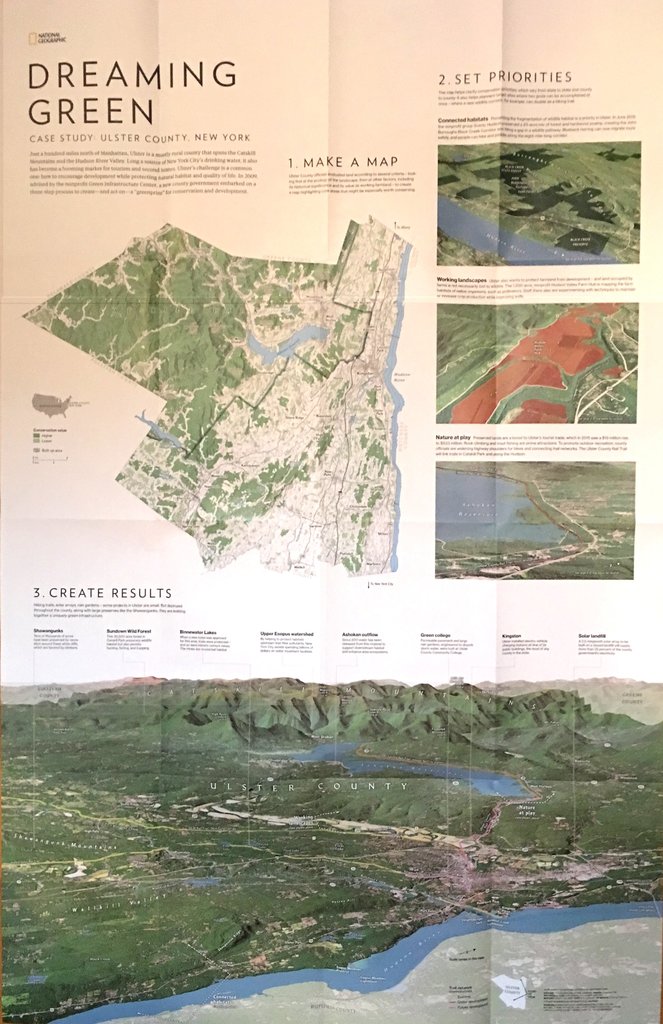 After a thirty month wait, the July 2020 issue of National Geographic has a two sided loose pictorial/map supplement tied to the main article.  Side A is a vista of Mount Everest and its surroundings and Side B (shown) is a map of Asia showing the continent's vital rivers. 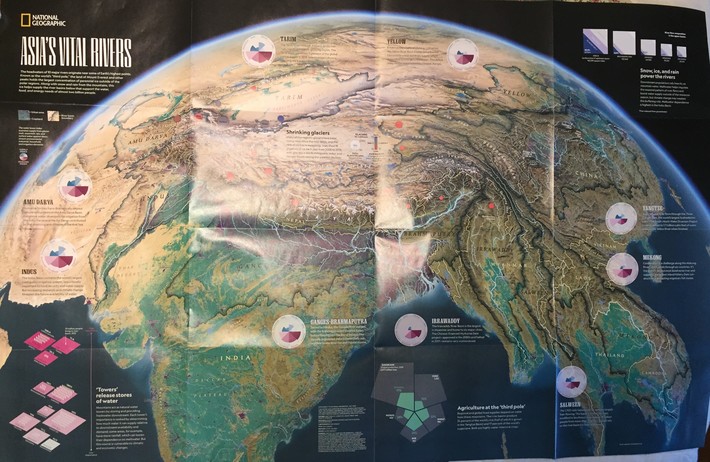 After fourteen more months, the next map supplement (September 2021) is one of the solar system.  It is entitled "Solar System in Action" and concerns its ongoing evolution and the role smaller bodies (asteroids and comets) play a part in it.  The "B" side of the supplement is a infographic about the sun, aptly titled "The Sun". 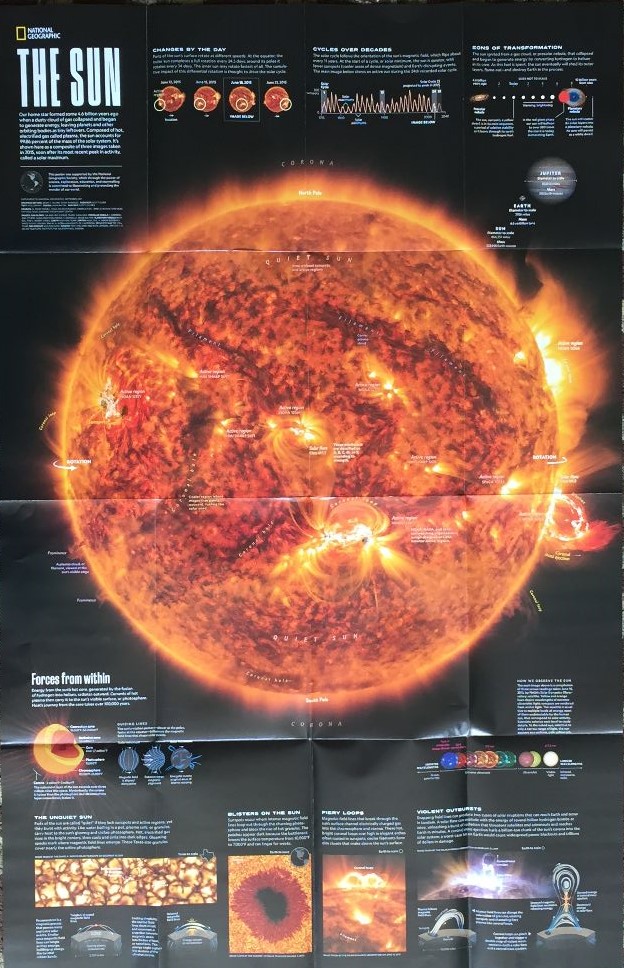 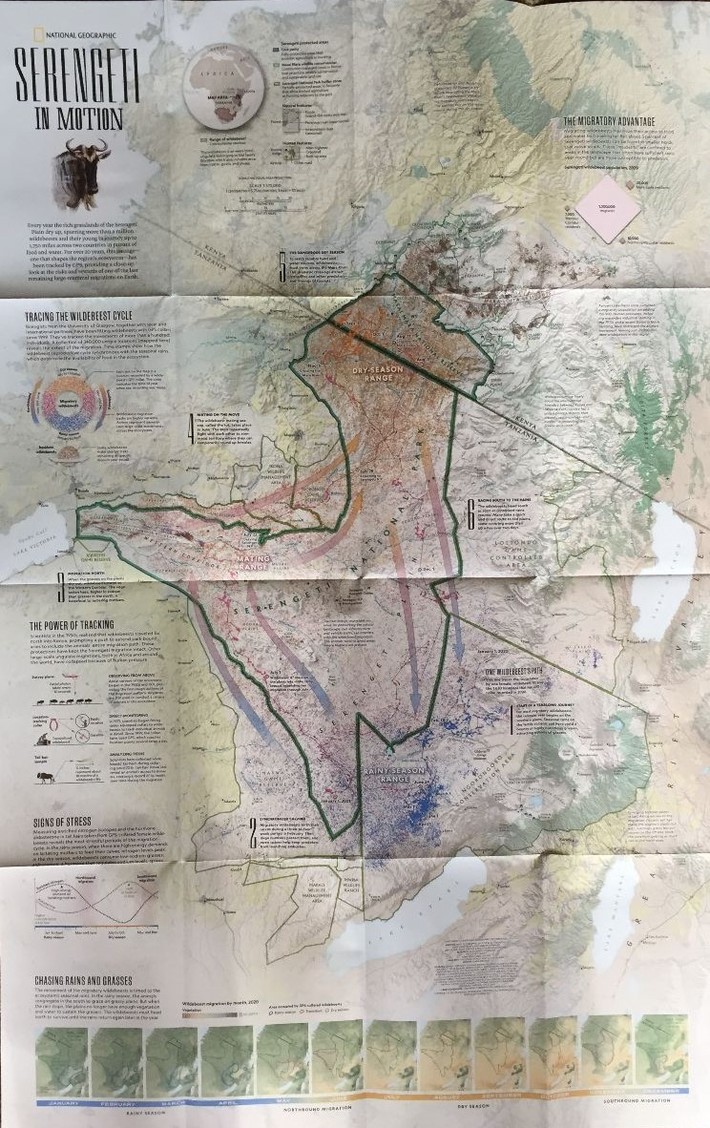 After only two months, in December 2021, another two-sided loose supplement was included in the National Geographic.  It includes the map "Serengeti in Motion".  The B-side is a pictorial entitled "Habitats of the Serengeti" (not shown).

The next map supplement, one of the World, appears in the May 2022 National Geographic.  It shows "The World's Forests: Decades of Loss and Change".  Side B has an Infographic, "Rainforests: A Delicate Balance", with two map insets.  This brings the number of "New" Map Supplements into double digits. 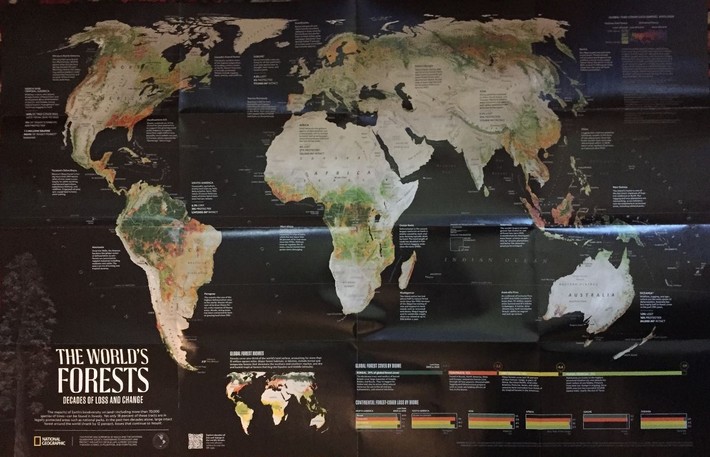 As always, I must thank Philip Riviere for the photos of the maps displayed in this discussion.  All of you please feel free to throw in your two cents on this topic.

It seems that they are stressing the posters and not the maps.. That started in the mid 60's when they started putting posters on the back of maps. The 1st. dual sided maps. I'm surprised they still put maps on the back...

It seems a shame.  Looking at issues through the years it seems the Society has devalued the maps.  In earlier years cartography was, at least, on an even par with photography in importance.  It is Geographic in the name, not Photographic.

I just wish they had a little more consistency it the display of issues with maps/posters.  The red lettering is great for volumes displayed spine-out compared to the blurb on the front cover.  You can quickly identify an issue with a map.

Note: I just added a citation for the fourth "new" map (Mars) from the November 2016 issue.

Note: I just added a citation for the fifth "new" map (US Habitats) from the December 2016 issue.

Note: I just added a citation for the sixth "new" map in this series.  This one, from the March 2018 issue, has bird migration paths.

It's been 2 years since the last "map" supplement. I'm worried (again).

Note: I just added an entry for the seventh "new" map supplement in this series (Everest/Asian Rivers).

Thanks George for listing the recent Map supplements.Looks like number 5 (US Habits) did not make it across the border to Canada.My copy of the December 2016 issue has no mention of an enclosed Supplement but there is an excellent section entitled Future of Parks dealing with the state of many of the larger National Parks.Can anyone shed any light on this?Perhaps they shipped a different version of the Magazine internationally.Have not encountered this type of problem in the past though

It's been a while, Jim; hope you are well.

Sorry to hear you missed a map.  Some time back, when Philip Riviere didn't receive a map, he contacted Cathy Hunter and she got one sent to him.  Of course that was around the time he received the magazine.  It's been four years.

Here is the cheapest Map on eBay I could find.

In reply to your question, my issue has the same article and is probable identical to yours.  The map supplement wasn't directly tied to any article.  They probably accidentally didn't send one to you; or maybe they didn't ship it to Canada, but I doubt that.

Thanks for the speedy response Tom.I agree that it probably was an omission from the magazine so I will order a copy from E-Bay to keep my collection up to date.Without your article listing the newer maps I would have missed this one so again many thanks and keep up the great work.