List of NG magazines dealing with astronomy and astronautics since 1890

I listed on my web all National Geographic magazines dealing with astronomy and astronautics since 1928 but 'd like to extend it to the beginning, by 1890. Currently I have gathered ~100 issues (they are probably some more) so in average there is about one issue per year (less in the past than nowadays).

The page displays each cover with the date, vol and number of the magazine, the subject and as far as possible a screenshot of the map or poster if it includes one.

In addition links are provided to bookshop selling back issues.

The page is written in French but as an image is worth thousand words in all langages, I think that the the page is self explanatory ;-)

I would like to be sure that my inventory includes all issues related to astronomy and astronautics.

I browse the collection manually so I could have miss some issues (e.g. I know there is one issue including some pages about aurora, I think it was released years before the one taken by ISS, but I haven't listed it as I considered that this phenomenon is linked to the geomagnetism but I presume that some readers could classify it in the astronomy).

The earliest and maybe 1st articles I found about astronomy are next :

- June 1928, The Mysterious Tomb of a Giant Meteorite (about the Meteor Crater)

In between there is the May 1936 issue including an article about the 1st picture showing the curvature of the Earth taken from 72000' aloft that I classified in the Astonautics.

Currently I have no access to oldest issues except in browing the rare sites showing their cover on the web, and no possibility to visit a library where I am not even sure to find oldest issues (may at Brussels at Albertine).

So I simply browse some indexes like Library Thing and other catalog.

If someone founds another issue dealing with astronomy or astronautics before 1928, I 'd appreciate in knwing its date. 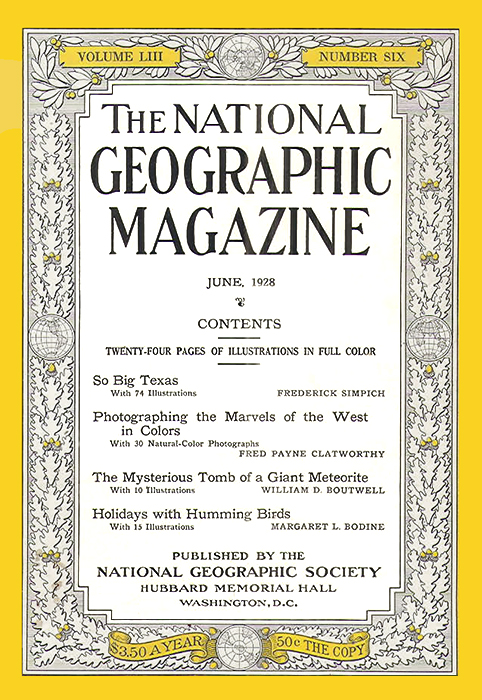 I have done a digital search on astronomy in the Nat Geo Magazine Data Base between 1888-1928 and found 10 articles between 1900 and 1925.. Here they are: ( in reverse chronological order)

1.January 1925- Interviewing The Stars "How the twentieth  century astronomers are Inducing the heavens to reveal their secrets" (pages 96-122)

2.August 1919- Exploring the Glories of the Firmament Pages 153-181  •  At Wisconsin's Yerkes Observatory and California's Mount Wilson, mirrors of unprecedented size give astronomers the chance to observe celestial objects.

3.July 1908- The Magic Mountain - Written by a Mount Wilson astronomer the article shows pictures  of the view from the mountain(not views of the sky)

4.November 1906- The American Eclipse Expedition- Pages 589-612  •  After months of preparation, an American expedition travels to Spain and North Africa to study the eclipse of August 1905.

6. October 1904- The Special Telegraphic-  Pages 411-415  •  A telegraphic signal sent out from the Naval Observatory of Washington, D.C., was received throughout the world in far away locations such as Fiji, Lisbon, Suez, and Bombay.

7.May 1904- Girdling the Globe Astronomically- Pages 236-236  •  Geographic Notes from the May 1904 issue include topics such as information on the Summer School of Geography and geology at Cornell University.

10.January 1900- The Total Eclipse of the Sun - Pages 33-34  •  The path of the upcoming total solar eclipse is conveniently accessible to a multitude of people. Over half a million persons will see this event of a lifetime from their homes, and many others will no doubt travel to witness the spectacle.

Your search is very helpful and I thank your for your time.

I keep your reply in my archives, and will try to find some of these issues

I was planning to respond earlier but Phil beat me to it.  My search was more "old school" but using the 1888-1947 cumulative index, I can verify all 10 of Phil's numbers listed but also a few post-1926 numbers that you should include in your list.  Anyway here are my additions to your list:

1937 Feb p 178 1st Natural=Color Photo of an Eclipse ever Reproduced, Showing the Corona

I still need to research the 1904 May number but it is also listed under Astronomy in the Cumulative Index.

Hope this has been of help.

Yes, all this helps me much.

It seems that prior the end of 1930's astronomy meant first of all "solar eclipse" ;-)

I think that added to my data, we have now compiled an exhaustive list of NGM dealing with astronomy (and probably astronautics too).

Remain to update my web consequently and to refer to your support.

Many thanks for your help.

According dumps found at http://freeshopmanual.com/downloads.php?cat_id=34&rowstart=15

there is no specific article about astronomy this year.

Again, I would like to know if there are NG issues including some pages dealing with astronomy or astronautics released between August 2015 and April 2016 ? A short list 'd be appreciated.

I haven't find any in bookshop but I only checked the cover. I would like to update my page at http://www.astrosurf.com/luxorion/national-geographic-astro.htm

None of those issues have a space-related article in them, however the November 2015 issue has a photo of a Saturn I model being tested in a wind tunnel circa 1960's on page 69; and a photo of the earth from lunar orbit on page 160.

I hope this helps.

I'm not sure you are interested in this item, but on page 14 of the June 2016 issue there is article about a star chart on a cup from Halai Greece in 600 B.C.

There is another Nat Geo related to Space, the one from January 1965.  It has an article entitled "The Making of an Astronaut". 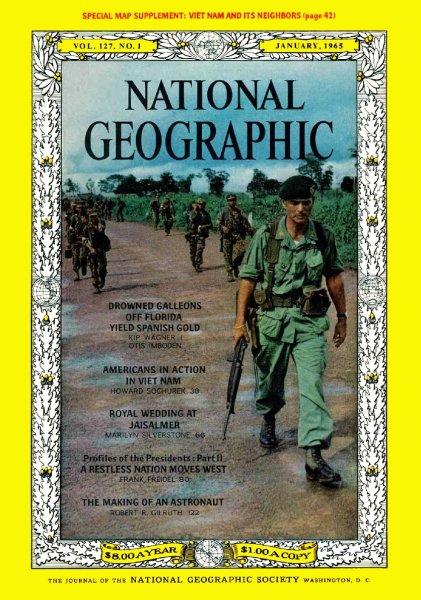