The cover photo to the June 1985 issue of the National Geographic is without a doubt the most iconic image ever to appear in our beloved magazine.  It has been praised and discussed in the NGM as well as in other publications.  It is also the basis for numerous parodies which is said to be the highest form of flattery.  I will briefly discuss the three NGM issues related to this image; two outside articles, one about the photographer and the other a news item about the girl herself; and a series of parody covers and images related to the photograph.

How National Geographic Sees Her The original picture is for a cover article entitled “Along Afghanistan’s War-torn Frontier” which was written by Debra Denker, with photographs by Steve McCurry.  It is a twenty-seven-page article documenting the plight of the Afghan refugees who had fled their country to Pakistan to escape the Russian-Afghan war.  The cover photo itself has an extremely descriptive caption “Haunting eyes tell of an Afghan refugee’s fears”.  It would not be the last time that this unnamed (at the time) girl would grace the cover of the NGM. The April 2002 cover image shows the same woman, now an adult, in burka, holding the photo of her McCurry took seventeen years prior.  It has a caption which reads “Found – After 17 Years An Afghan Refugee’s Story”.  The eight-page article, really a special report without page numbers, entitled “A Life Revealed” was written by Cathy Newman, with photographs by, you guessed it, Steve McCurry.  The article documents Steve’s search for the unnamed “Afghan girl” he once photographed.  Once found she was rephotographed and interviewed.  Her name is Sharbat Gula and she is Pashtun, that most warlike of Afghan tribes.  Her parents were killed when she was about six by Soviet bombing.  McCurry said that “the eyes still glare”. Sharbat returned to grace the cover of the National Geographic in October 2013, a 125th Anniversary Collector’s Edition – The Photo Issue.  A cropped closeup of her face from the original 1985 photo is a fitting cover since, as I stated before, that is the most iconic image ever to appear in the magazine.

How Others See Her

While several magazines have published the 1985 photo while discussing the National Geographic Society and/or Photography in General, I am concentrating on just two references.  The first is a ten-page article in the July/August 2002 issue of American Photo entitled “Circle of Life”.  It is about the life’s work of Steve McCurry, named by the magazine as “Photographer of the Year”.  The article states that “the portrait, one of the most memorable photographs ever made, has fascinated viewers with its unusual combination of grittiness and glamour and the air of ambiguity captured in the girl’s striking green eyes”.

The second item is a brief entry in the November 14, 2016 Time magazine.  It reported that Sharbat Gula was arrested in Pakistan for fraud.  Pakistan was cracking down on fake IDs in an attempt to deport some 1.4 million Afghan refugees.

That’s about it for the serious look at the photo, the photographer, and the subject, now for the lighter side of things – Parodies of the June 1985 cover: 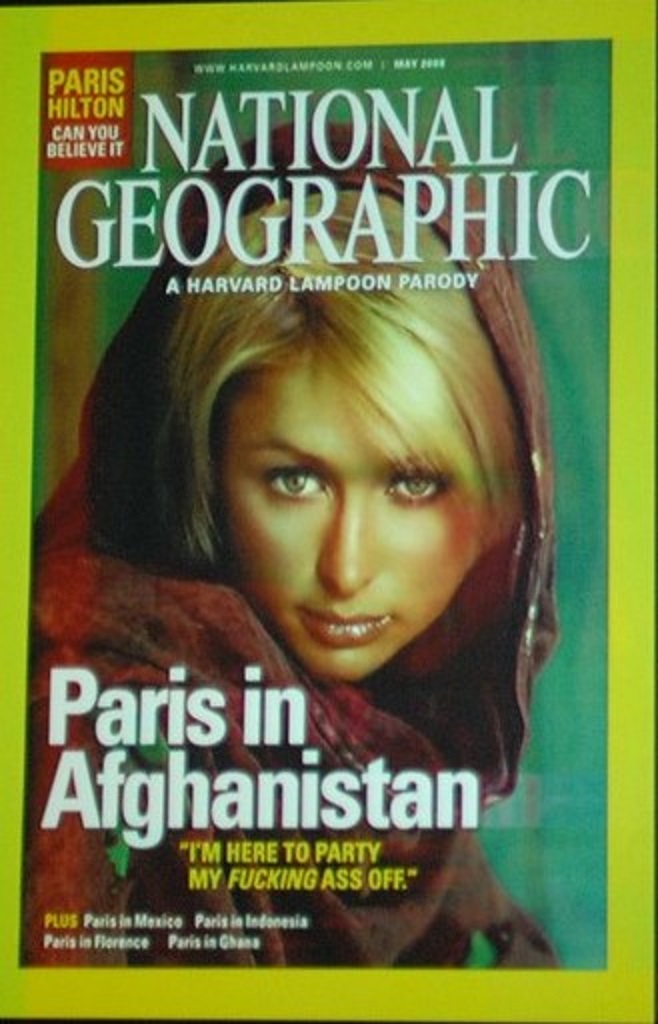 Paris Hilton: This cover has a poorly done cut-&-paste of Paris’s face over Sharbat’s image.  It has the title “Paris in Afghanistan”. 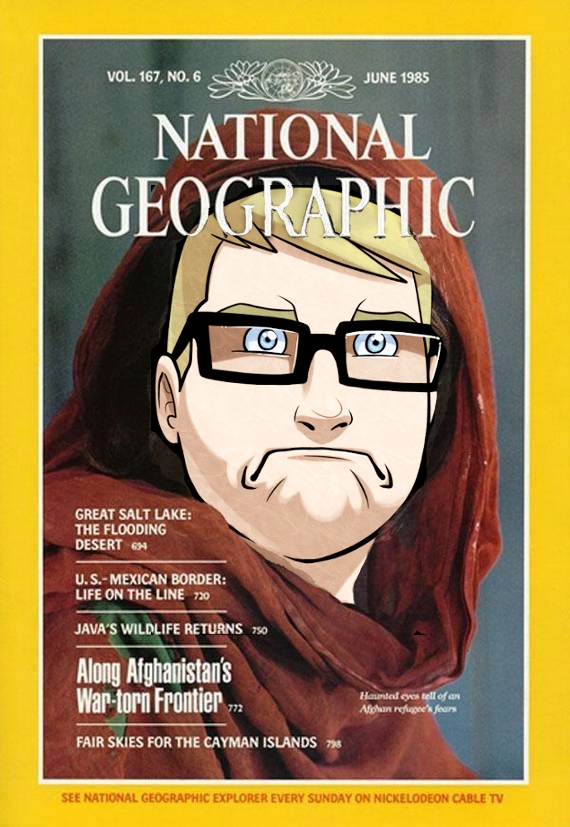 Cartoon male: Another poorly done cut-&-paste, this time of a cartoon male face over Sharbat’s image.  It uses the original cover’s verbiage.  [Note: if anyone knows the cartoon character's name, let me know and I will update this post.] 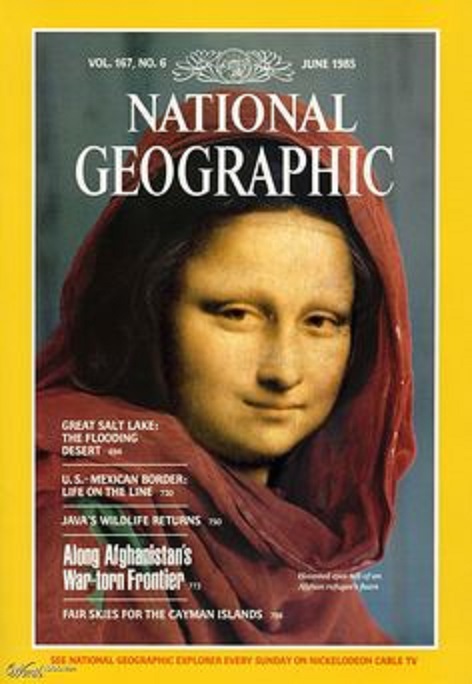 Mona Lisa: This cut-&-paste is done better than the previous two.  It combines two iconic images that share a similar pose, Mona Lisa and Sharbat.  The original cover verbiage is again used. Mona Lisa:  This is another combination of Mona Lisa and Sharbat.  It is of the original photo, and not the magazine cover.  Personally, I think this rendition is better than the previous one. 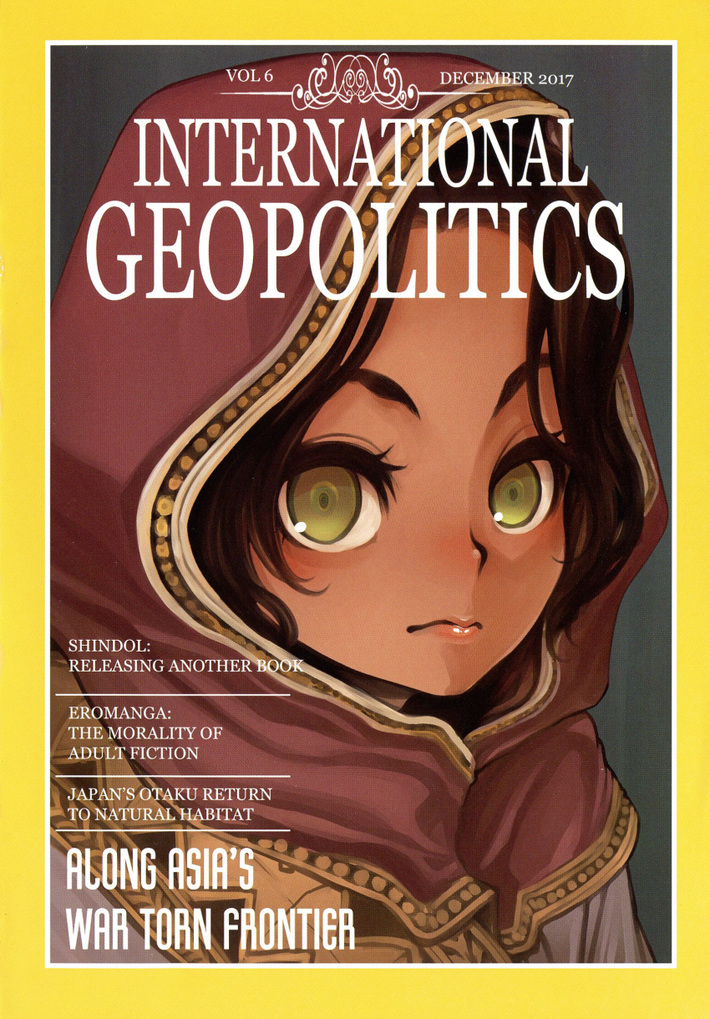 Anime Afghan Girl: Not a cut-&-paste, but a cartoon cover of the December 2017 “issue” of International Geopolitics.  It has a similar title to the original, “Along Asia’s War-torn Frontier”.  The cartoon drawing is posed similar to Sharbat, and highlights the piercing green eyes. 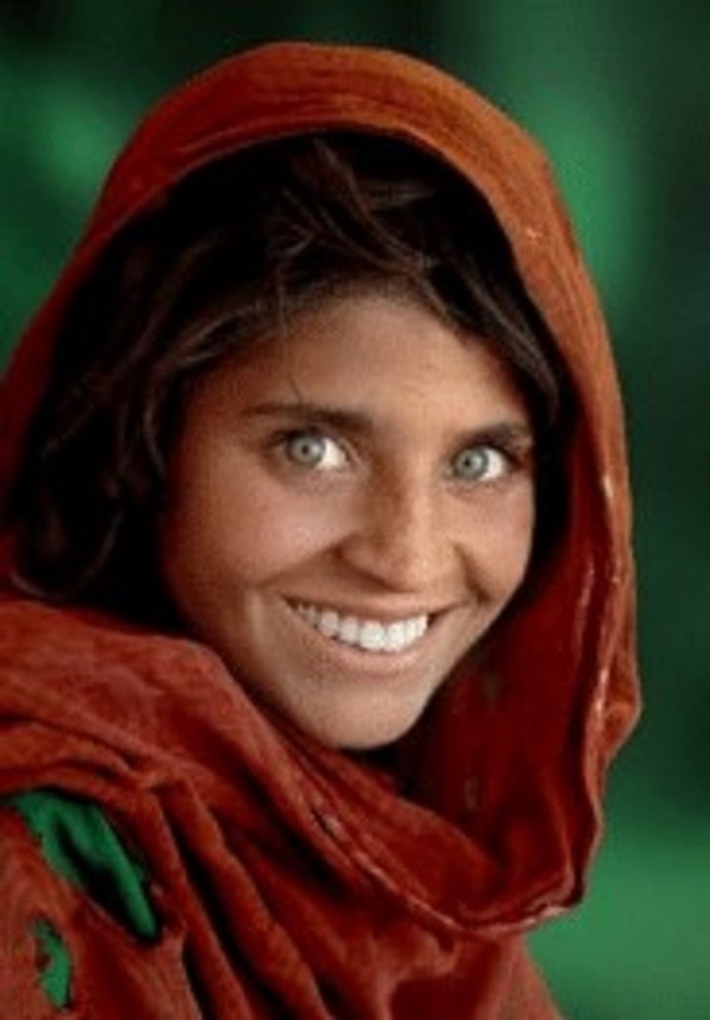 Smiling Sharbat: This final image is a doctored photo of the original image, not the cover.  It shows Sharbat with a wide grin.  The pearly whites change the emotions generated by the eyes from worry and fear to friendliness and joy.

Came across another view on the Afgan girl and her life:

Thanks, Helena, for sharing this.