This is the twenty-ninth installment in my ongoing series of brief reviews of century-old National Geographic Magazines. 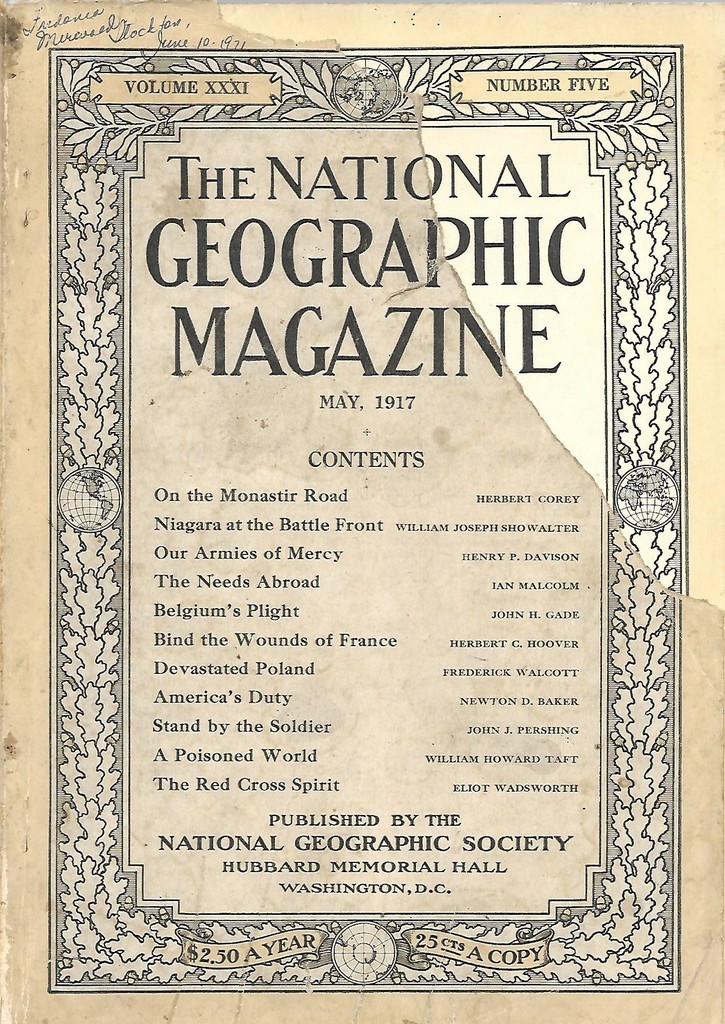 As you can see by the cover, there are a whopping eleven articles in this issue.  So many, in fact, that there was no room on the cover to document the number of illustrations.

The first article is entitled “On the Monastir Road” and was written by Herbert Corey, a war correspondent.  He compares his job in Macedonia to the same job in France.  In France, he could interview and photograph on or near the front lines and then go back to a hotel in some safe town away from the battle.  In Macedonia, he had to buy a tent, a blanket, and a cooking pot; and was given an orderly.

At the southern end of the road is the port of Saloniki and the Allied base.  At the Northern end is the town of Monastir along the battle front.  The enemy troops, Bulgarian mostly, hold position in the hills surrounding the town.  At times the road is so muddy from rain that it is almost impassable.

The article contains thirty-one black-and-white photographs, eight of which are full-page photographs.

The second article, “Niagara at the Battle Front” was written by Willian Joseph Showalter.  The article documents the “contributions” to the war effort made by the great waterfall through the cheap electricity it produces.  With it, artificial grinding materials became economically feasible.  Once the war broke out our natural supply of emery and corundum from Asia Minor was cut off.  Every shell manufactured for the war effort is ground with Niagara-produced carborundum.

Other contributions include alloys including harder steel and aluminum, and chlorine used for water purification.  The article contains six black-and-white photographs, all full-page.

At the bottom of the last page of the second article is a box containing text entitled “Help Our Red Cross”.  It is a plea to the American people by President Woodrow Wilson on behalf of the Red Cross.  He goes on to stress the magnitude of the conflict by comparing it to the Civil War.

At the beginning of the third article is an introduction by our editor, Gilbert H. Grosvenor.  He makes members aware of the American Red Cross War Council held in Washington on May 24 and 25.  The meeting was called by President Wilson and attended by the authors of articles three through eleven.  The articles appear to be transcripts of their speeches at the meeting.

Grosvenor goes on to encourage members to donate to their local Red Cross and for members living in remote places to send money care of NGS using the form immediately following the last article.  Interestingly there is a second form on the back of the Red Cross form, this one for the YMCA’s war effort.

The third article itself is titled “Our Armies of Mercy”.  It was written by Henry P. Davison, Chairman of the War Council of the American Red Cross.  In it he tries to convey the scope of the task ahead, not only in support of our soldiers but also our allies and the refugees afflicted with starvation and disease.  He then pleas with all Americans, even children, to give and do all they can for this effort.

The article has three black-and-white photographs.  One of them is a full-page photo.

Article four, titled “The Needs Abroad”, was written by Ian Malcolm, Member of the British Red Cross and of the House of Commons.  Mr. Malcolm tries to describe the enormity of the number of war wounded soldiers and the scale of the effort to treat and care for them.  From hospitals in London and Paris, through field hospitals, hospital ships, hospital trains, and mile upon mile of ambulances, he describes what the Red Cross is doing and needs to continue doing.

The need for doctors, nurses, and money to buy equipment and medicine are discussed.  And he offers experienced advice to the American Red Cross.  Also, the need for wholesome entertainment of the troops can be addressed by donating to the YMCA war effort.  The article has five black-and-white photos two of which are full-page.

The fifth article, “Belgium’s Plight”, was written by John H. Gade, of the American Commission for Relief in Belgium.  From near starvation to forced labor, the suffering in Belgium and northern France is nearly incomprehensible.  The author gives a firsthand account of the plight of the populace under German “rule”.  He then praises American generosity.  The article has three embedded black-and-white photos, all of them full-page.

Article number six is entitled “Binding the Wounds of France” and was written by Herbert C. Hoover, Chairman of the Committee for Relief in Belgium [and future President of the United States].  The author first deflects the adulation he has been receiving for the work being done in Belgium and northern France and instead credits the volunteers on the ground there.

With the Germans leveling towns, destroying farm implements, stealing livestock, and displacing the population, Mr. Hoover estimates the damage to be in the billions of dollars.  He does not advocate charity, but instead requests that the American people help the refugees help themselves.  The article has five black-and-white photographs with one of them being full-page.

The seventh article was written by Frederick Walcott and is entitled “Devastated Poland”.  The author first discusses his experiences in Belgium and Germany’s use of starvation as a weapon there.  With it they can induce slave labor and clear land for German resettlement.

Mr. Walcott then moves his discussion to the eastern front.  He describes the destruction of the key fortification of Lutz by the howitzer “Fat Bertha” and the subsequent collapse of the Russian line.  The retreat gave Germany possession of the region known as Poland.  Millions of Poles were made homeless.  Some made their escape to Russia, while the remainder the Germans placed in refugee camps.  It is these refugees the committee is trying to bring relief.  The article contains seven black-and-white photos, none of them full-page.

Article number eight is titled “America’s Duty” and was written by Newton D. Baker, Secretary of War.  The author balances the need for military action as well as charity work.  When asked how much one should give to the Red Cross he would say “All you have” or at least “give till you feel it.”  The article has four black-and-white photographs.  One of which is a full-page photo.

The ninth article is entitled “Stand by the Soldier”.  It was written by Major General John J. Pershing, U. S. Army.  He starts by discussing the care packages sent to his troops by the Red Cross during “our little expedition into Mexico”.  While he acknowledges the importance of the role the Red Cross plays in the morale of our troops, he stresses the needs of our allies even more.  The article has one full-page black-and-white photograph embedded within it.

Article ten, “A Poisoned World” by Former President William Howard Taft is not about mustard gas.  The poison he writes about is the German mindset.  Their belief that “might makes right” and the strong can slaughter the weak is a cancer on the world that must be excised.  For fifty years, the minds of the German people have been brainwashed into believing that authoritarianism is the only way and that they have a duty to do anything the Kaiser tells them.   Of its seven black-and-white photographs, three are full-page photos.

The final article is entitled “The Red Cross Spirit” and was written by Eliot Wadsworth.  In it, he praises the doctors and nurses in the field and the giving nature of the American people.  The enormous task of supporting not only our troops but those of our allies is stressed in this final pitch for donations.  The article has eight black-and-white photos, of which four are full-page.

On the bottom half of the last page is a short, four-verse poem entitled “The Red Cross Spirit Speaks”.  It was written by John H. Finley and has an a-a-b-c-c-b rhyming pattern. 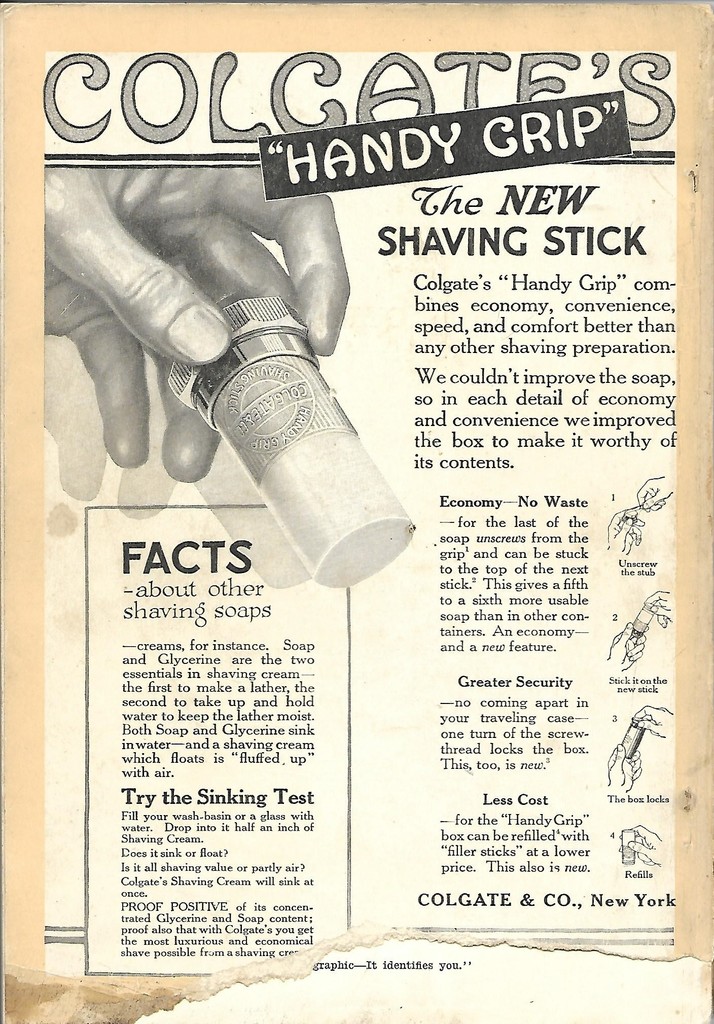 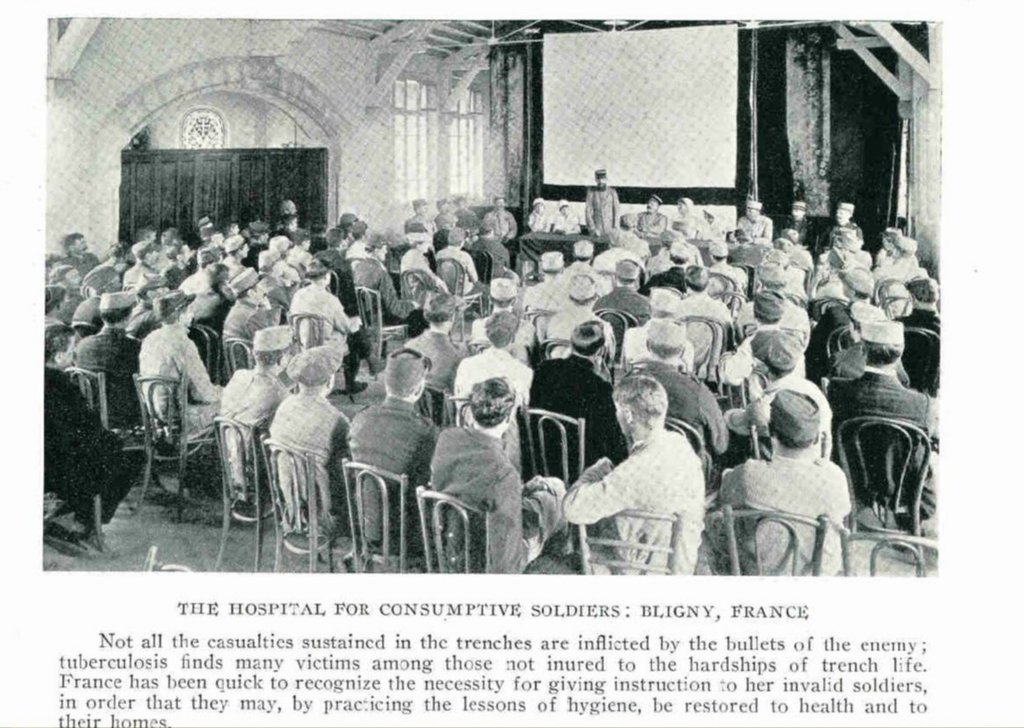 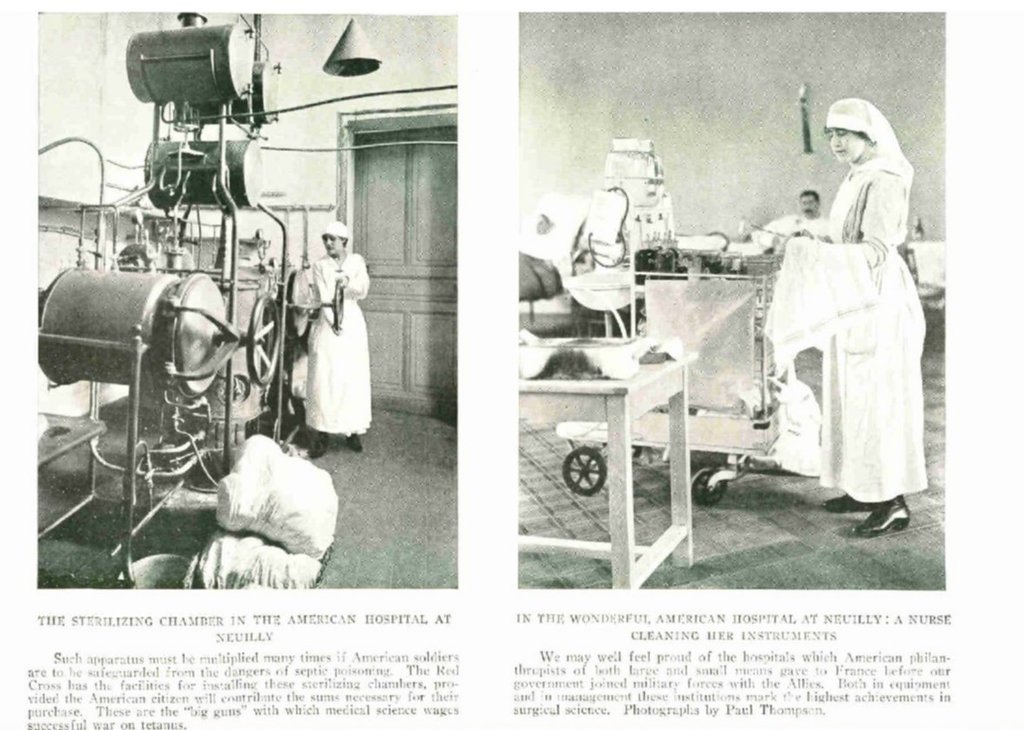 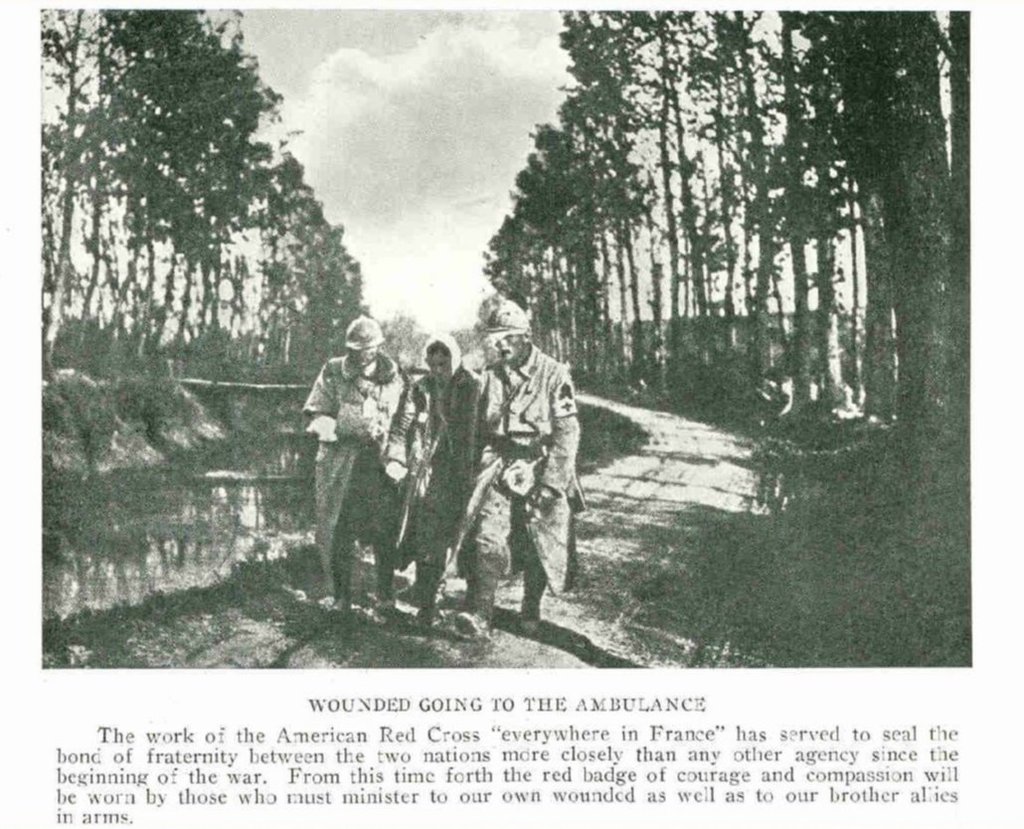