This is the thirtieth in a series of reviews of National Geographic Magazines celebrating their 100th anniversaries of publication. 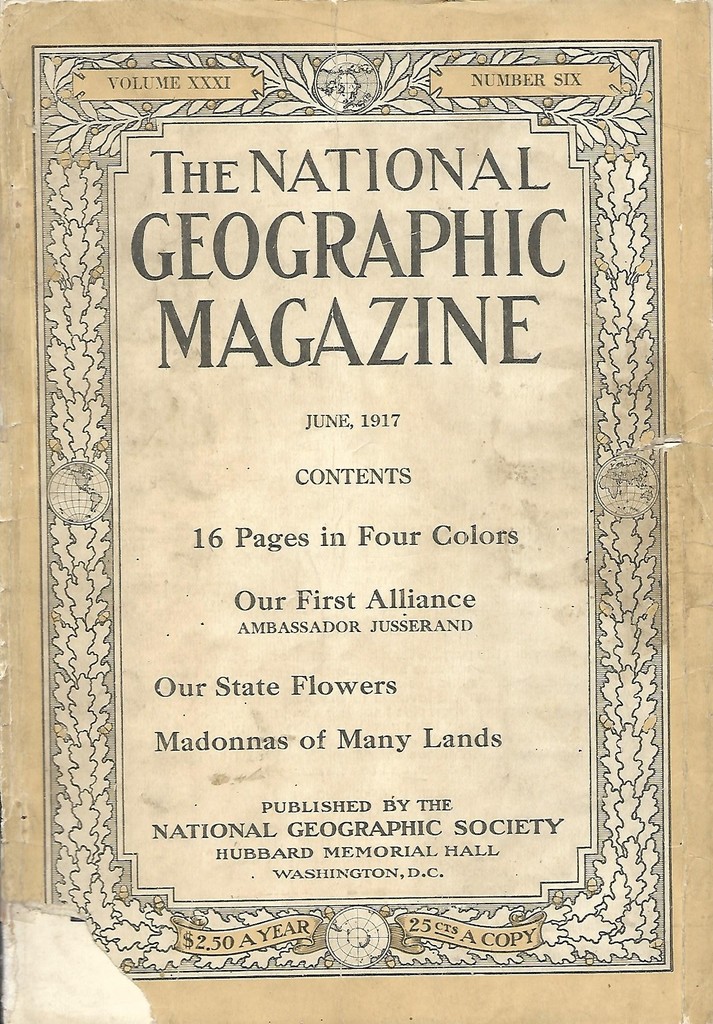 As you can see, this cover is less crowded than the previous two.  While it lists only three articles, the first article “Reviving a Lost Art” is not documented on the cover.  The article has no byline and is short with only two pages of text.  It also has nine black-and-white photographs.  It documents the accomplishments of the Germans in the art of drying fruits and vegetables for the war effort and for reducing waste; more to the fact, eliminating waste.

The writer urges all Americans, both in the cities and the country, to take steps to dry all unused and surplus fruits and vegetables.  Methods are described for drying food, and communal and regional efforts are recommended for collecting and storing the preserved foodstuff.

The second article in this issue is also the second article listed on the cover: “Our State Flowers”.  The article has the subtitle “The Floral Emblems Chosen by the Commonwealths” and has the simple byline of “By the Editor”.  The article proper is five pages long and gives a chronological account of the thirty-two states that have selected a State Flower.  It also lists the preferences of some of the ten states that have yet to officially select a flower.

Following the text, there is an index listing the state, its chosen flower (if any), the method of selection, page number of the description, and page number of the illustration.  The index is followed by fifteen pages of flower descriptions.  As with previous field guides, each description has the flower’s name followed by its genus and species (in Latin).  Unlike other field guides, the text doesn’t contain each species range and features, but instead describes the flower’s selection process by the state or states choosing it.  It also contains anecdotal stories about the flower.

Between the last two pages of descriptions are the “16 Pages in Four Colors”.  These are twenty-four color drawings of the flowers painted by Mary E. Eaton, of the New York Botanical Garden.

Article three is the first article listed on the cover.  It is entitled “Our First Alliance” and was written by J. J. Jusserand, Ambassador of France to the United States.  A brief introduction to this article written by the editor describes it as an abridged version of his book “With Americans of Past and Present Days” by courtesy of the publishers, Messrs. Charles Scribner’s Sons.

While the article touches on other contributions to the American Revolution made by the French army and navy, notably by Lafayette and De Grasse, its main thrust is the story of Count Rochambeau and his expeditionary force in America.  Through letters written by him and his officers, the story of their experiences, both in the ocean crossing and their time in America is documented.  That time in America was not only time in battle or in battle prep, but also in travel through America not under English control and meeting the America people.  The story even follows Rochambeau after the war and his life in France.  It tells of how he survived the French Revolution and the Terror that followed by dropping the name of a General he knew, someone named Washington.  The article contains eight black-and-white photographs all but one are full-page.

The fourth article (third and last on the cover) is not really an article at all.  Entitled “Madonnas of Many Lands”, it is a compilation of sixteen full-page black-and-white photographs of mothers with children throughout the globe.  Several of these photos are quite powerful.  The only text in this “article” are the captions below each photograph.

The fifth article, like the first, is not documented on the cover.  It is entitled “Our Second Alliance” and is the transcript of a speech given by J. J. Jusserand to the U. S. House of Representatives on May 3, 1917.  In it, he thanks America for committing to the war effort.  It has only one full page of text and a full-page black-and-white photograph.  It is a nice companion piece to the third article.

The next page is an orphan of sorts, it is a full-page black-and-white photograph of a field of clover in Montana.  The caption references back to the State Flowers field guide.

The last article in the issue is also undocumented on the cover.  Its utilitarian title is “The Conversion of Old Newspapers and Candle Ends into Fuel” and it has no byline.  It describes how Italian women and children are producing 1½ million ration heaters a day by rolling newspapers, pasting them closed, cutting them into sections, then boiling them in paraffin from candle nubs.  Once dried, these ration heaters burn smokeless and can be used like “solid alcohol” (i.e. Sterno) where coal or wood are not feasible. 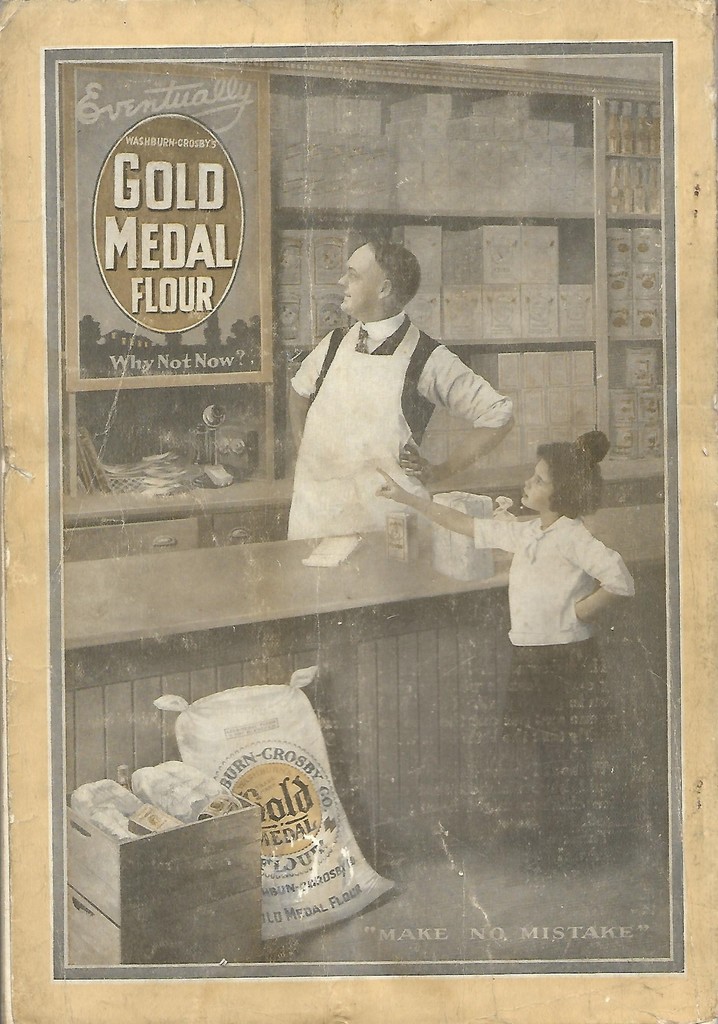 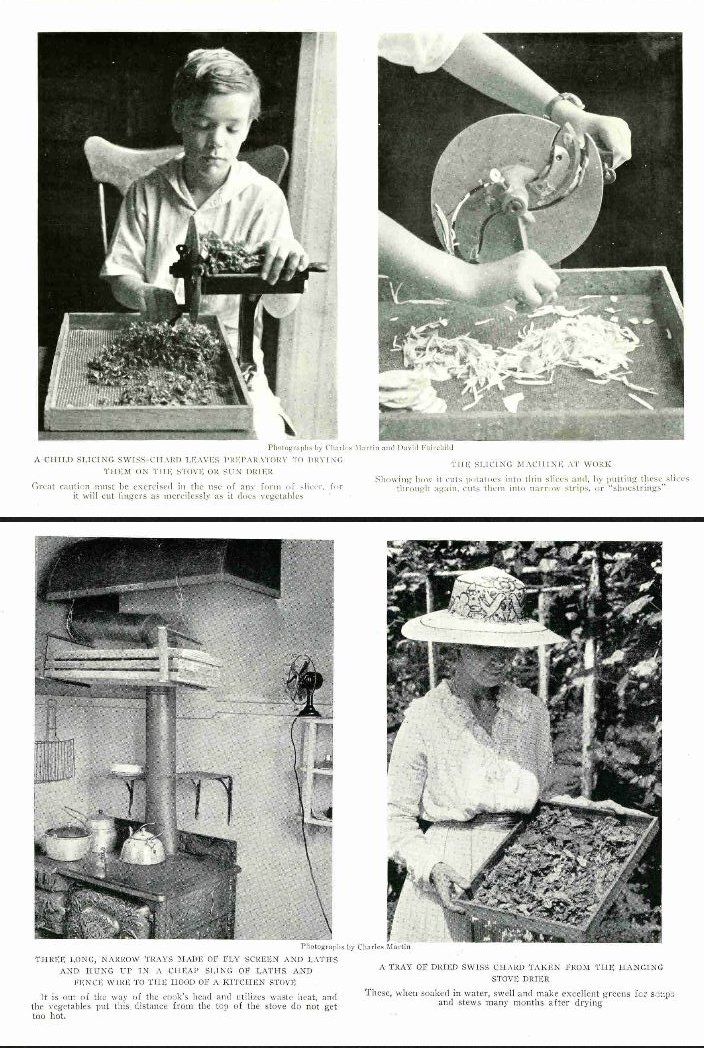 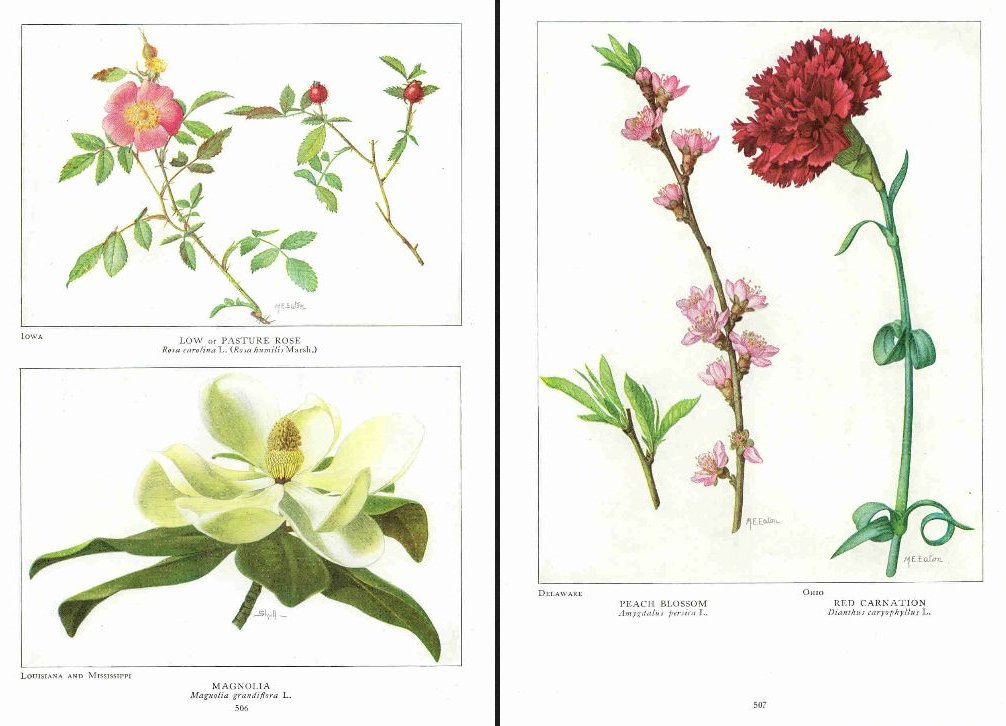 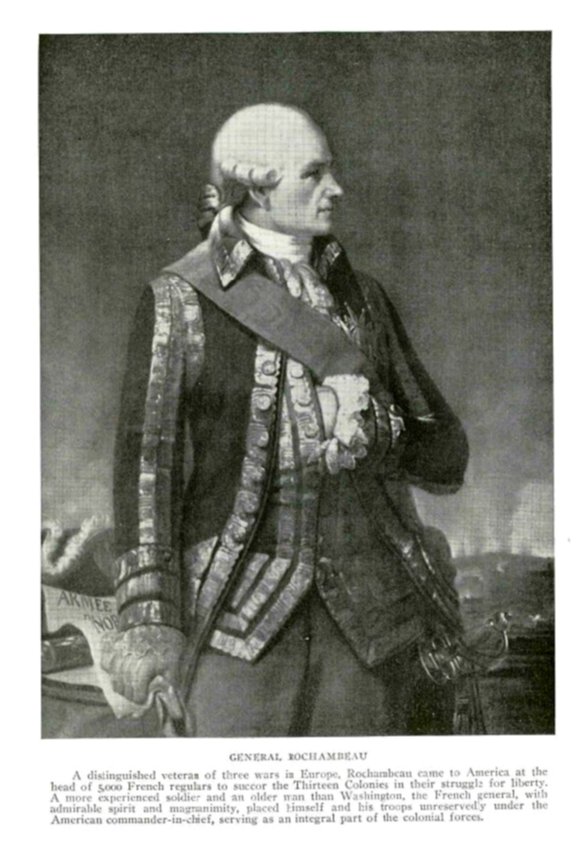 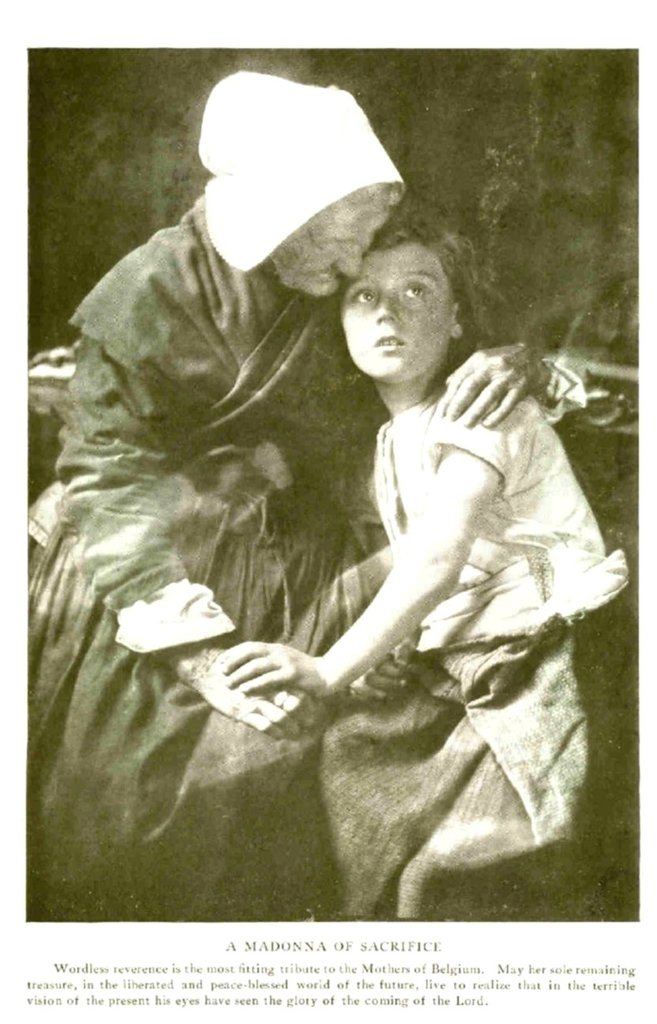 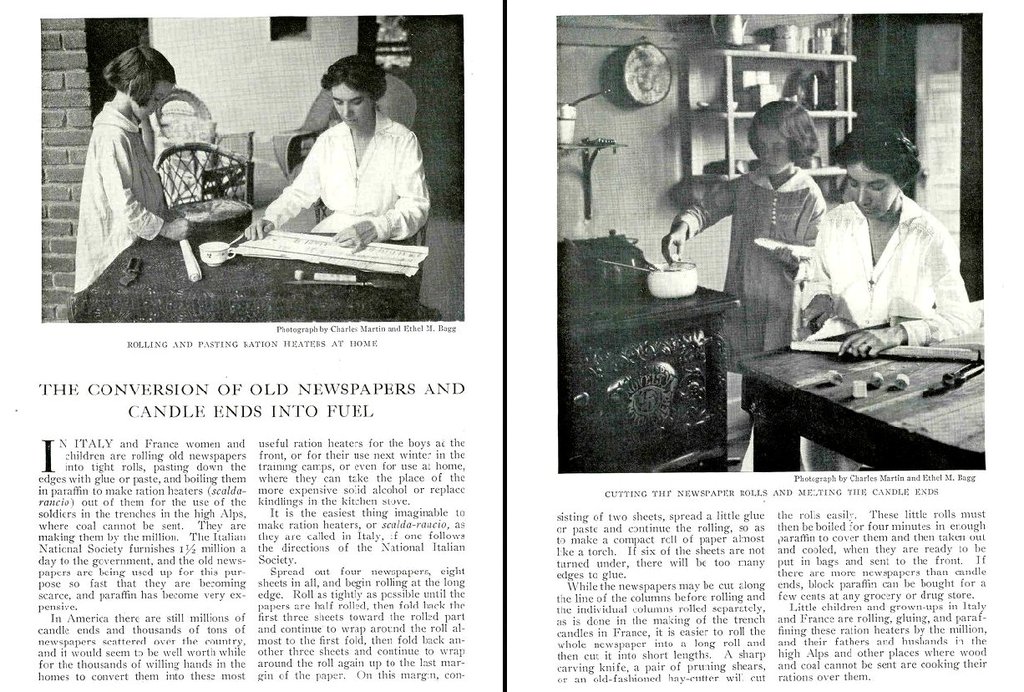 Here are three more Madonnas from the magazine besides Phil's "Madonna of Belgium". 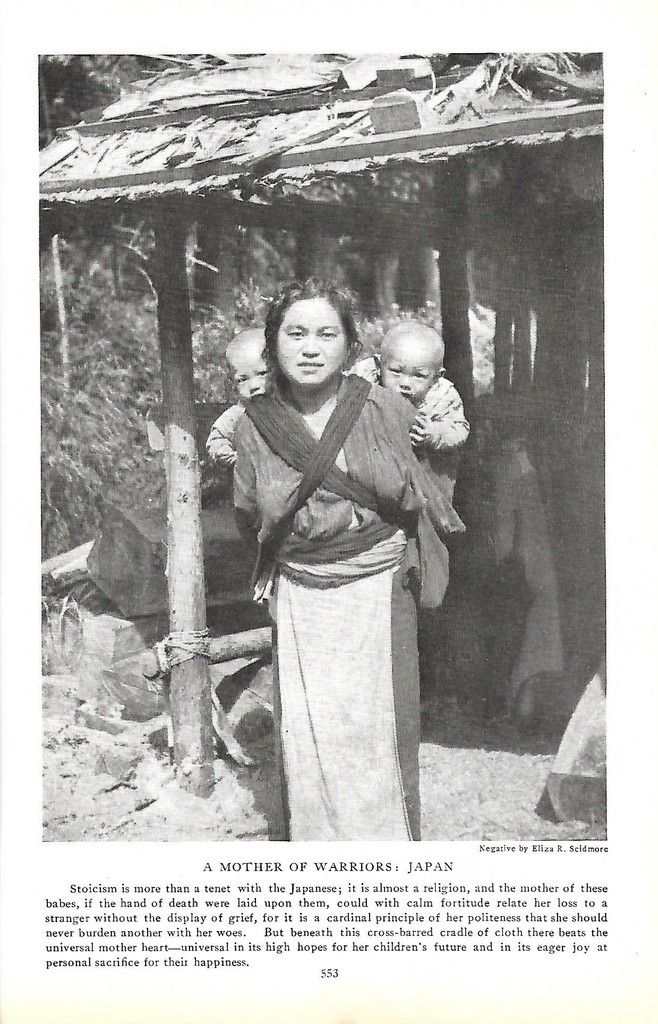 Madonna of the Philippines 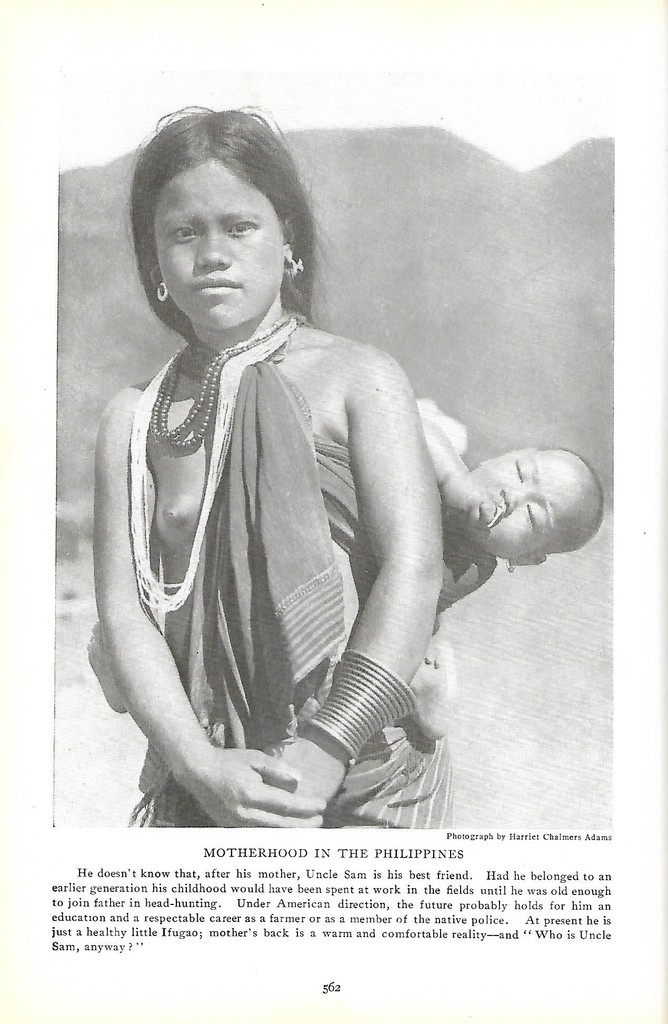 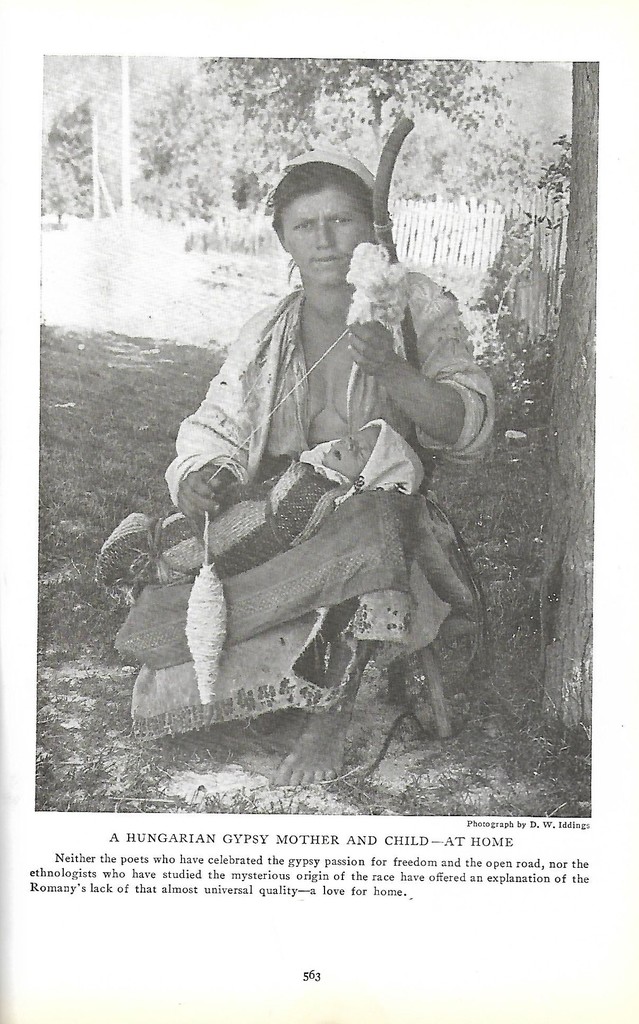