Besides supplements for the eye (maps and pictorials) the National Geographic Society occasional produces supplements in the magazine for the other senses.  (The Smell Survey comes to mind.)  One of the other senses they addressed was the sense of hearing.  Three times during its publication, the National Geographic Magazine had an attached, flexible mini-record as a supplement.  Each of these records had associated articles in the magazines.  Two of those articles were cover articles.

I have presented these three collectables chronologically, with a notation of the cover, brief reviews of the associated articles, and a comment on the record.  Note: all photographs are courtesy of Philip Riviere. The first article, “The Churchill I Knew”, was written by former President Dwight D. Eisenhower.  It is short, only five pages long, and has a color photo of the two of them together, a color portrait of Churchill, and two black-and-white photographs.  The article is about Churchill and his qualities.

The second article, “Be Ye Men of Valour”, was written by Howard La Fay, National Geographic Senior Staff.  It is thirty-nine pages in length and has thirty-four black-and-white photographs, as well as thirteen in color.  The article is about the life of Churchill, especially during World War II.

Between the second and third articles is a one-page introduction to the recording entitled “The sound of living history”, as well as the record itself.  The intro contains excerpts from his speeches and tributes by others.  It also has a description of the work involved in producing the record, as well as instructions for its removal from the magazine and its playing on a phonograph.

The third article, “The Final Tribute”, was written by Carolyn Bennett Patterson, National Geographic Assistant Editor.  It is twenty-seven pages long and has thirty-five color photographs, one with a key identifying the people in the photo.  The article visually documents the funeral of Churchill. 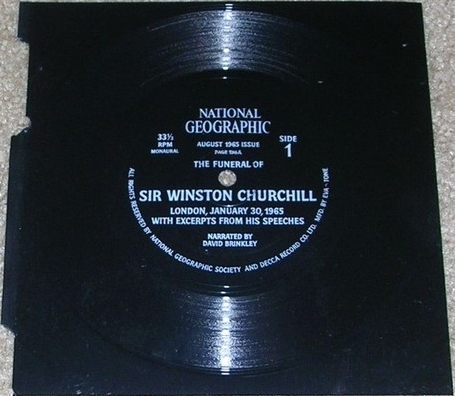 This two-sided vinyl record has the title “The Funeral of Sir Winston Churchill”.  The subtitle is “London, January 30, 1965 with Excerpts from his Speeches”.  It is narrated by David Brinkley. Again, the record is linked to the cover article entitle “First Explorers on the Moon” with the subtitle “The incredible Story of Apollo 11 in Five Parts”.  The cover photo is Edwin Aldrin standing on the Moon.

This set of articles starts with a three-page introduction which includes a listing of the five parts and three color photographs from the surface of the Moon.

The first article is entitled “I: Man Walks on Another World”.  It was written and photographed by Neil A. Armstrong, Edwin E. Aldrin, Jr., and Michael Collins, the Apollo 11 Astronauts.  It is eleven pages long and contains one black-and-white and eight color photographs.  It tells the story of the mission in their own words by printing a transcript of the communication between the spacecraft and the ground.

The second part, “II: Sounds of the Space Age”, is a two-page introduction to the recording.  The recording is attached between the two pages.  The intro has four small color photographs and describes the making of the record.  It also has a list of space-related articles in the National Geographic entitled “Milestones on the way to the moon”.

Part four of this compilation is entitled “IV: What the Moon Rocks Tell Us”.  This article was also written by Kenneth F. Weaver.  It is four pages long and has six color photographs, and it describes the work being done at the Lunar Receiving Laboratory.  The information gleaned from the moon rocks, including age, temperature history, and composition is discussed.

The last part of this series is titled: “V: Next Steps in Space” and was written by Dr. Thomas O. Paine, the Administrator of NASA.  It is six pages long and has two black-and-white photographs and one in color.  It also has one black-and-white drawing as well as two in color.  In the article, Dr. Paine discusses the ongoing unmanned exploration of Mars, the building of a space station, and the future exploration of the solar system. This two-sided vinyl record has the title “Sounds of the Space Age”.  The subtitle is “From Sputnik to the Lunar Landing”.  It is narrated by Col. Frank Borman, USAF Astronaut. While they are not cover articles, there are two articles about Humpback Whales.  There is also a one-page introduction to the record embedded within the second article.

The first article is titled “Humpbacks: The Gentle Whales”.  It was written by Sylvia A. Earle, Ph.D. with photographs by Al Giddings.  The article is sixteen pages long and has nine color photographs and a map on page four showing the whales’ range.  This article is about the life of these majestic animals.

The second article, “Humpbacks: Their Mysterious Songs”, was written by Roger Payne, Ph.D.  The photos again are by Al Giddings.  The article is seven pages long and has five color photographs and one black-and-white sketch showing how the whale songs were recorded.  The article describes the work done to record these animals as they communicate among themselves.

Before the last page of the second article is a one-page introduction to the record and, of course, the record itself.  The intro is entitled “Symphony of the Deep: Songs of the Humpback Whale” and has one small color photograph. The intro discusses the work of Roger Payne and his wife, Katy, as they recorded all but one of the tracks on the record.  That track was recorded by Frank Watlington. 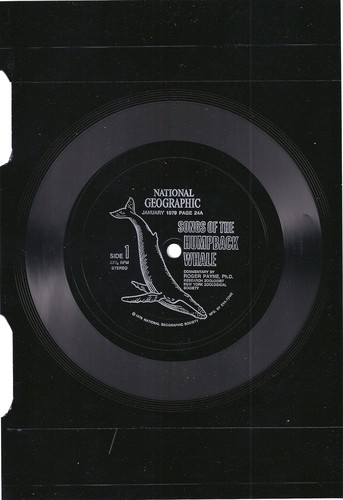 This two-sided record has the title: “Songs of the Humpback Whale” and has commentary by Roger Payne Ph.D., Research Zoologist, New York Zoological Society.

I was always chagrined that that they did not use the Whales as the cover for the '79 article / sound sheet, but below is the cover that should have been used (but I suppose Jan '84 was better late than never). 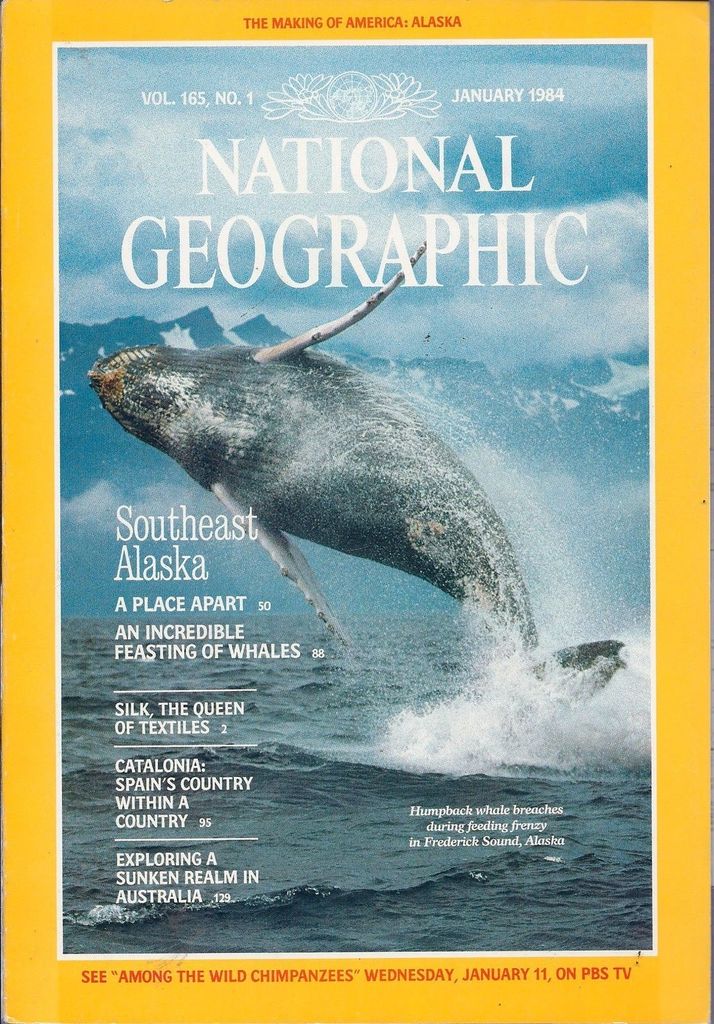