This is the forty-first installment in my series of short reviews of National Geographic Magazines as they mark their 100th anniversaries of being published. 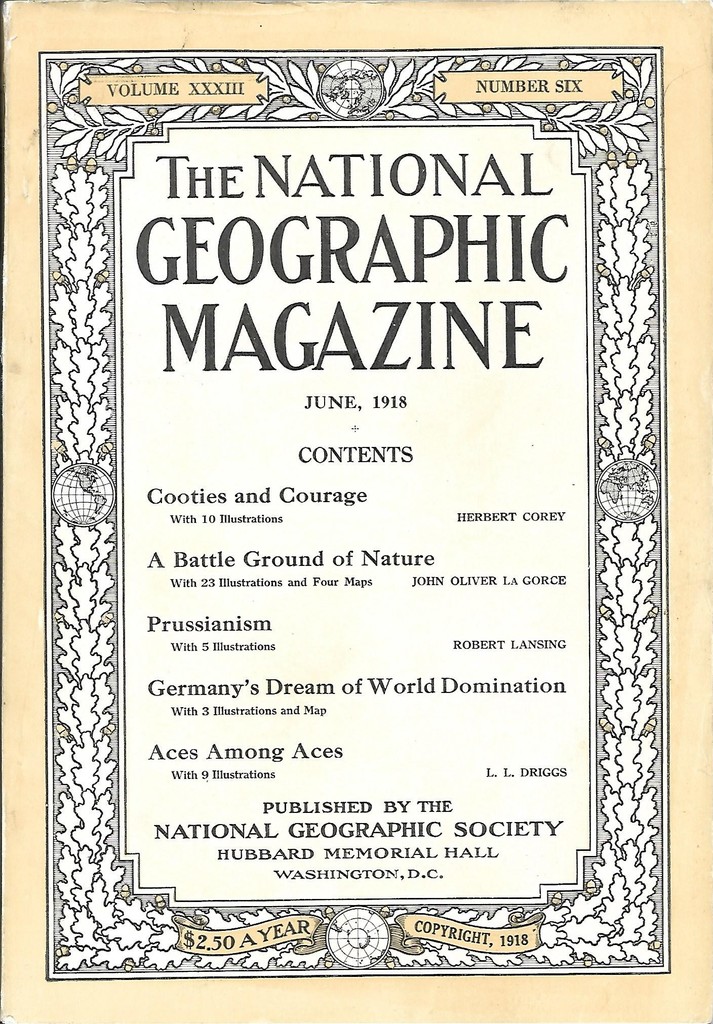 The first article in this issue is entitled “Cooties and Courage”. It was written by Herbert Corey, a National Geographic contributor and author of such articles as “The Monastir Road”, “Shopping Abroad for Our Army in France”, and “A Unique Republic” among others. The Article contains ten black-and-white photographs. Three of those are full-page in size.

The body louse, or “cootie” has long been known to be a bothersome and demoralizing pest to the soldiers in the trenches. It has now been shown to be health threat and therefore a menace that must be minimized at all cost. Both Trench Fever and Typhus have been traced to the insects the French call “totos”. Since a soldier who comes down with Trench Fever will be out of commission for an average of six months, the importance of minimizing this pest becomes paramount.

Mr. Corey gives a first-hand account of life among the infantry and how the men are dealing with these minor horrors of war. While at the front water is scarce and used primarily for drinking. Little is available for bathing and clothes washing. It is not surprising to learn that practically all the men in advanced areas are lousy.

A powder has been developed to combat these “coddlers”. It is called N C I powder. It is made up of naphthalene (96%), creosote (2%), and iodoform (2%). While it is effective in killing, and preventing lice, it has two drawbacks. First, it stinks, therefore it would never be used in civilian life. The second objection to N C I is that it causes “severe smarting” if used in large quantities. Other treatments include vermijelli ointment, a preparation of crude oil and paraffin, a mercury ointment, and even gasoline when its available.

Away from the front, the “pants rabbits” can be dealt with in earnest. Heat and hot water can give relief from the scourge. Men bathe with plenty of soap and hot water. Clothes are steamed at 215 degrees for forty-five minutes or boiled for five minutes. Then they are ironed with a very hot iron down every seam and in every hiding place for the “seam squirrels” and their eggs.

No Army is cleaner than the American Army. Every effort is made to keep our men free from “cooties”. Clean underwear is furnished to the men at every opportunity. They are also given every possible insecticidal device available including the French “cootie bag” and the British “navvy’s butter”.

The page immediately following the first article is brief companion piece entitled “Hospital Heroes Convict the “Cootie””. It has no byline, nor does it have any photographs. This editorial piece documents a medical study performed on sixty-six healthy American soldiers to prove that a) the body louse is the carrier vector for Trench Fever, and b) Trench Fever is caused by a microbe. Both objectives were met. The study breaks down like this:

The second documented article is entitled “A Battle-Ground of Nature: The Atlantic Seaboard”. It was written by John Oliver La Gorce, the Assistant Editor of the National Geographic Magazine, and author of such articles as “Roumania and Its Rubicon” and “The Warfare on Our East Coast”. The article contains twenty-three black-and-white photographs and four sketch maps. Twenty of those twenty-three photographs are full-page in size.

This article is very similar to the one Mr. La Gorce wrote for the September 1915 issue of National Geographic. In that earlier article he compared the shifting coastline to a war between land and sea, with wind as a shifting ally. What he didn’t do is compare this ongoing battle to the World War.

In this new article he compares the sea to the aggressor (Germany) with Neptune (the Keiser) in command. Rain is its aerial bombardment, waves and storm surge the ground assault, silt and sediment as “prisoners of war”, and boulders thrown against the coast in a storm the heavy artillery.

In Mr. La Gorce’s analogy the land is the defender (the Allies) and the natural defenses built over time, the barrier islands, sand bars, and river deltas are examples of counterattacks. Here is where he includes the four maps to show these areas of reclaimed land and new defenses. 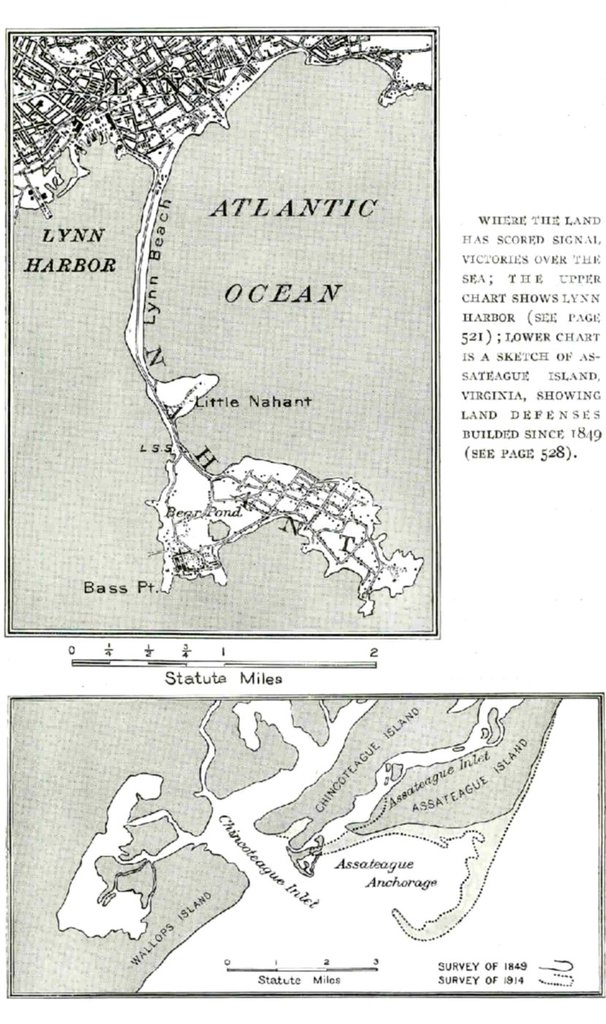 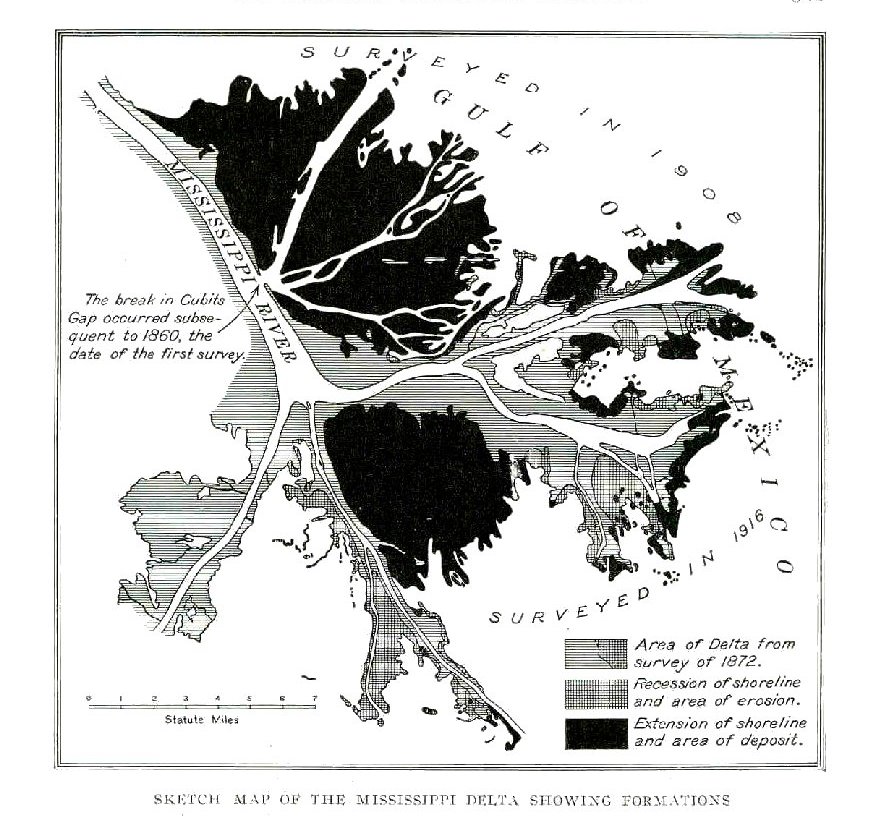 All Maps Courtesy of Philip Riviere.

The shifting winds can be an ally or a foe to the land depending on which way it blows. These Mr. La Gorce compares to the Bolsheviks. As for man, he is a neutral observer in this conflagration. Lighthouses and lightships are guards of our neutrality. The Coast and Geodetic Survey which continually map the everchanging coastline are the war correspondents, while the U. S. Coast Guard plays the role of the Red Cross in this tale.

The next article is entitled “Prussianism” and was written by Robert Lansing, the Secretary of State. It is the transcript of an address given to Union College on June 10, 1918. It contains five black-and-white photographs, three of which are full-page.
The Secretary states that the single purpose of the German people is the expansion of territory with the ultimate goal of World Domination. Any peace agreement reached to end this conflict must, therefore, not be a return to the status quo.

The German people are continually taught by their leaders, philosophers, and even from the pulpits that they are superior. They are infused with “an all-absorbing ambition to prove themselves ‘supermen’, chosen by natural superiority and by divine mandate to be rulers of the earth”.

The author discusses German “intrigue” around the globe to further their ambitions. He also states that Germany cannot be trusted. As an example, he cites the case of the Sussex. The Imperial Government gave its solemn word that it would cease ruthless slaughter on the high seas. Within six weeks the German ambassador asked Berlin to give him advanced notice of when the U-boat attacks would resume so he could have all German ships in American ports destroy their machinery.
“German diplomacy and intrigue, as now practiced, must be proclaimed an international crime and suppressed forever. The philosophy of the ‘superman’ and of world mastery must die discredited. The evil influences which have so long poisoned the minds of the German people must lose their potency.”

As with the first article, the preceding one has a companion piece on the same topic. This one however, is documented on the cover. It is entitled “Germany’s Dream of World Domination”. Its byline simply reads “By the Editor”. It has three black-and-white photographs embedded within it, all of which are full-page. It also has a sketch map of the world. After an introduction which describes the map by land area that Germany feels is their rightful due and that they have future designs, the article is a compilation of snippets from articles and speeches by various German leaders and businessmen laying out Germany’s claim to a country, a region, or a continent. By combining all these claims, you come up with the map.

The final article is entitled “Aces Among Aces”. It was written by Laurence La Tourette Driggs. It contains nine black-and-white photographs, none of which are full-page.

The article discusses the air war in Europe concentrating on the pilots who have become “the most polished aerial duelists”. These are the Aces to which the title refers. They all have at least 5 confirmed kills; most have many more. The top Aces for each country are discussed: Fonck (45) and Guynemar (53) for France; Lufbery (18) for the United States; McCudden (54), Fullard (48), and Bishop (72) for Britain; and von Richtofen (80) for Germany. 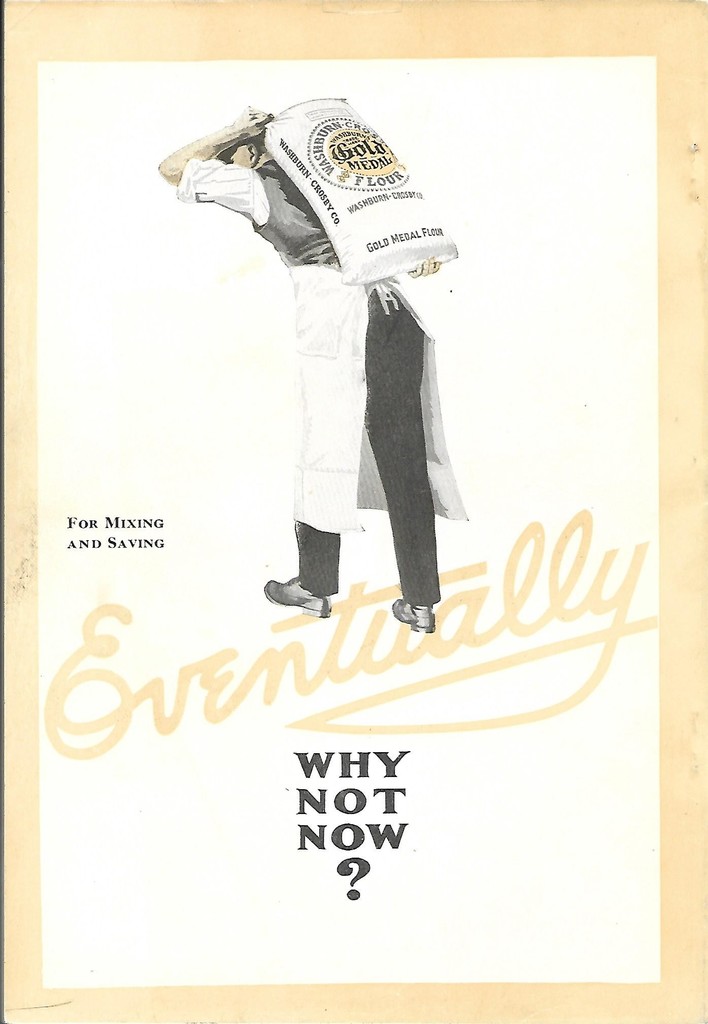 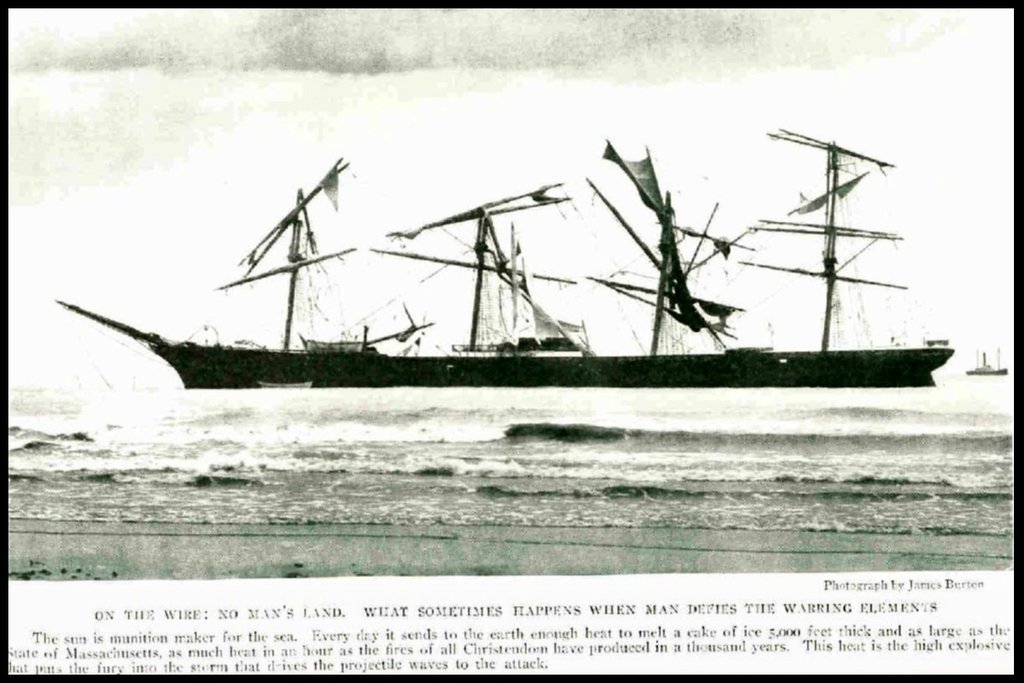 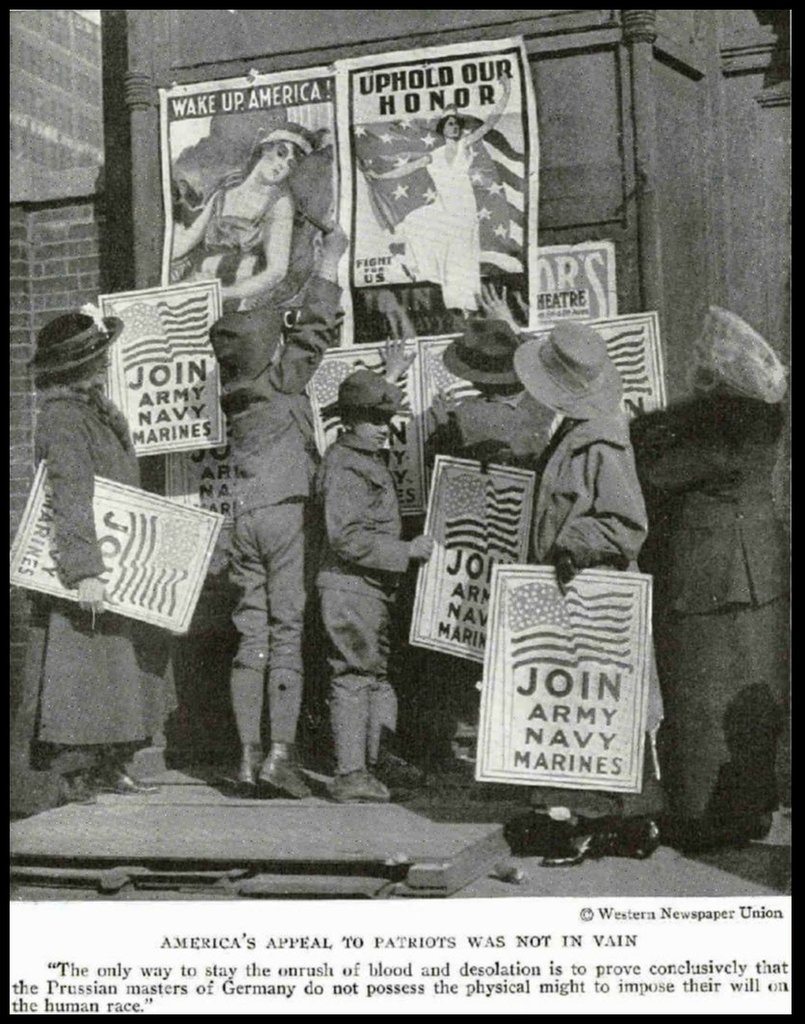 Thank you George! So interesting!