This is the 25th installment to my series of short review of National Geographic Magazines from one hundred years ago. 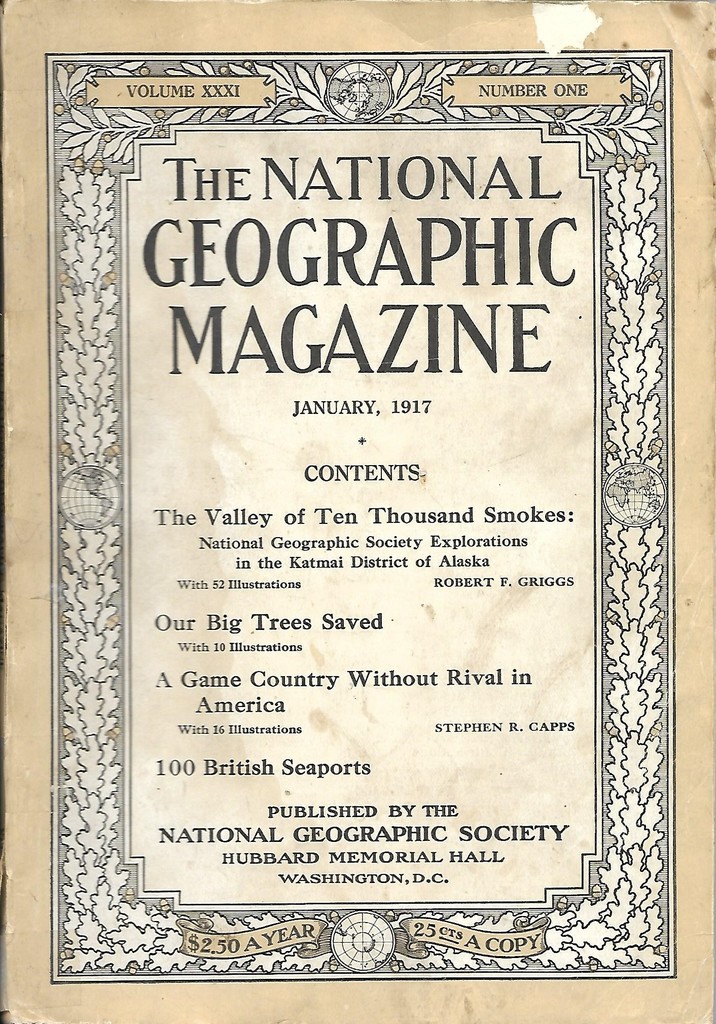 As you can see from the cover there are four articles in this issue. The first one in the magazine is the second one listed on the cover, "Our Big Trees Saved". There is no byline for this short, 11-page article about the creation of the Sequoia National Park by the Department of the Interior with an assist from the National Geographic Society.

Congress had approved $50,000 for the purchase of the land but the asking price, with additional lands negotiated, was $70,000. With time running out, the Government asked the Society for help. National Geographic donated the funds thus securing this wonderful national park.

The article contains ten black and white photographs, six of them full-page meaning this article is short indeed.

The second article in the magazine is the first listed on the cover. It covers the Societies exploration in 1915 and 1916 of the Katmai District of Alaska following the June 1912 eruption of Mount Katmai. It was written by Robert F. Griggs and is entitled "The Valley of Ten Thousand Smokes". It contains 52 illustrations including fifty black and white photographs, one map with inset (Page 23), and one diagram with a cross section of the volcano. 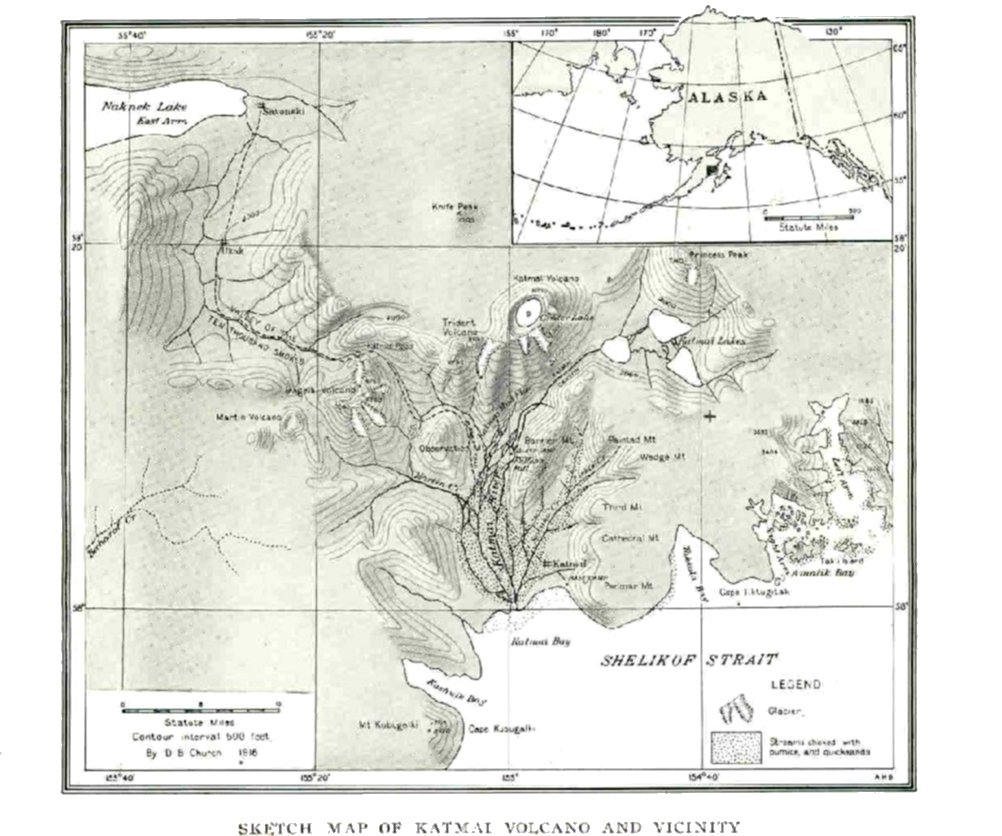 The article starts with a discussion of ash fall amounts on the mainland and Kodiak Island to the south which got a foot of ash. It then goes in to rapidity in which Kodiak has recovered with lush grasslands "as high as one’s head".

The expeditions arrived at the village of Katmai on the mainland to find it utterly destroyed, not by ash fall but by a massive flood which apparently had just occurred. Combined with the ash fall, the flood had turned the entire valley in which the village had stood into quicksand. Even after slogging through the muck to higher ground it still was not safe. Wind had swept the volcanic ash into deep piles alongside mountain ridges. In many places this ash covered snow and ice fields which had subsequently melted leaving voids below the surface.

Despite these challenges, the explorers were able to survey much of the region. On the second expedition, the following year the team was able to scale Mount Katmai, not once but twice. Toward the end of expedition number two the explorers searched for, and found the source of plumes observed in the distance. As the article’s title implies, this turned out to be the Valley of Ten Thousand Smokes.

A third expedition is being prepared to explore this volcanically active valley.

The third article in this issue is entitled "A Game Country Without Rival in America". It is about the ongoing effort to create the Mt. McKinley National Park in Alaska (now known as Denali National Park). It was written by Stephen R. Capps and contains sixteen illustrations. Fifteen of them are black and white photos and the other is a map of the proposed park on Page 71. While the beauty and majesty of the parks mountains and glaciers were in no danger, the concern was for the wildlife residing in the park, especially the megafauna. A protected reserve was needed before unlimited hunting could depleted the population beyond possibility of recovery.

Two parties sent by the U.S. Geological Survey were undertaken during which counts of observed large animals were performed. These included Caribou, Long Horned Sheep, Moose, and Bears.

The last article in this issue is entitled "100 British Seaports". It has no byline but the photographs are credited to A.W. Cutler and Emil P. Albrecht. (See their article on Britain in the July 1915 issue). Missing from the cover is a count of illustrations. There are, in fact eleven, ten black and white photographs and a map of Britain on Page 85. The eleven-page article is very short with five of the photos full page and the rest half page in size.. 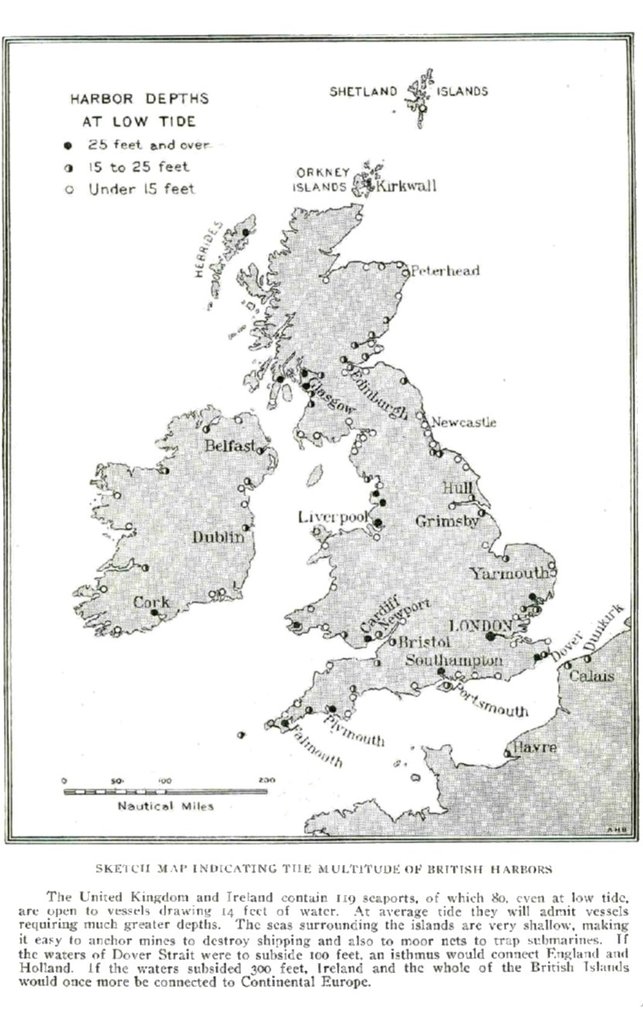 The article discusses the difficulty the Germans were encountering in their attempt to blockade the island nation with their fleet of U-boats. 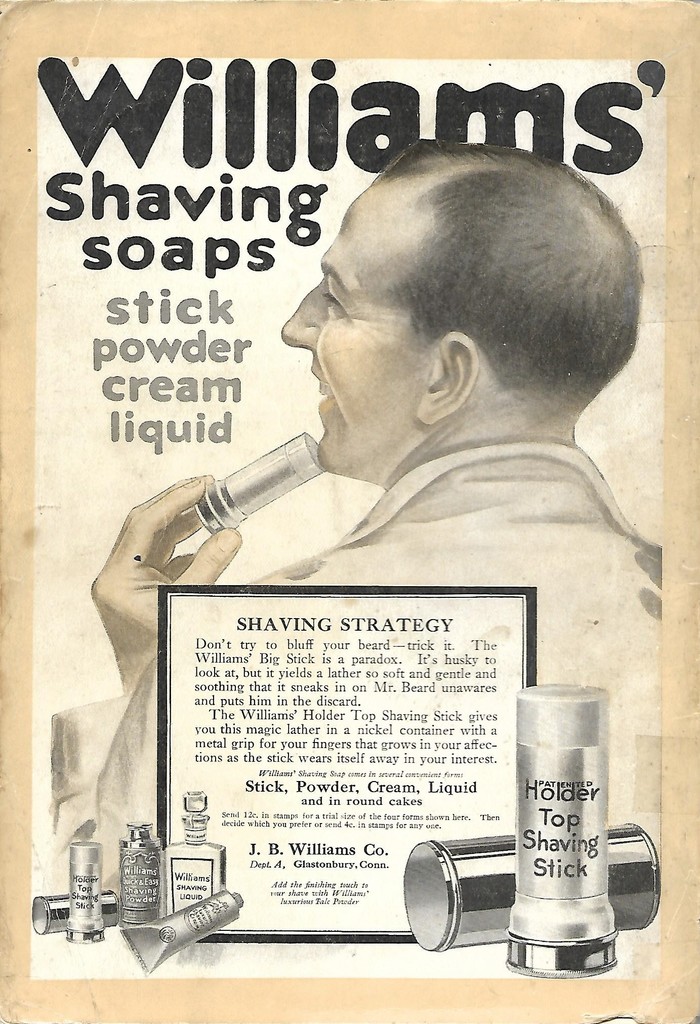 As mentioned in the title of this discussion, this issue has an alternate cover: 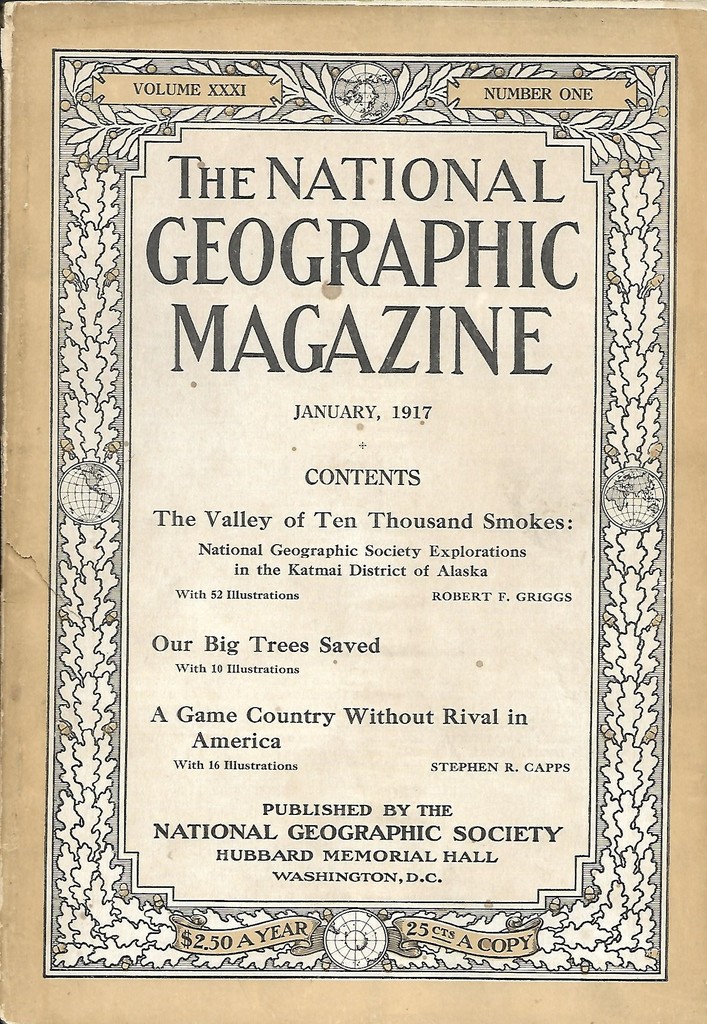 Notice the fourth article is missing from the cover. It does appear in the magazine, however.

A very unscientific study seems to indicate that this variant, unlike several other alternate covers from this era, is fairly rare. Starting with my issue and two cover images I found on line (all with the fourth article listed), I then went on eBay to search for the variant. I found 13 copies that included an image of the cover. This brought my total covers to 16. Of the issues for sale only one was the variant missing the fourth article. (Of course, I bought it.)

This indicates (but far from proves) that the mistake was discovered and corrected very early in the production run. 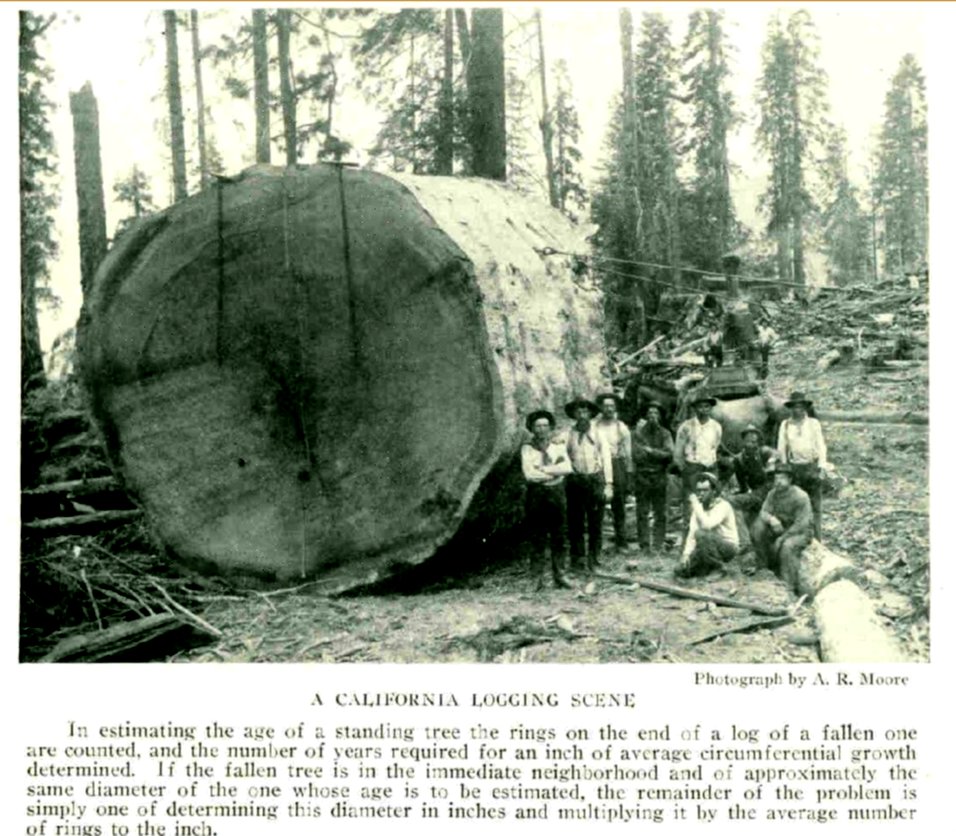 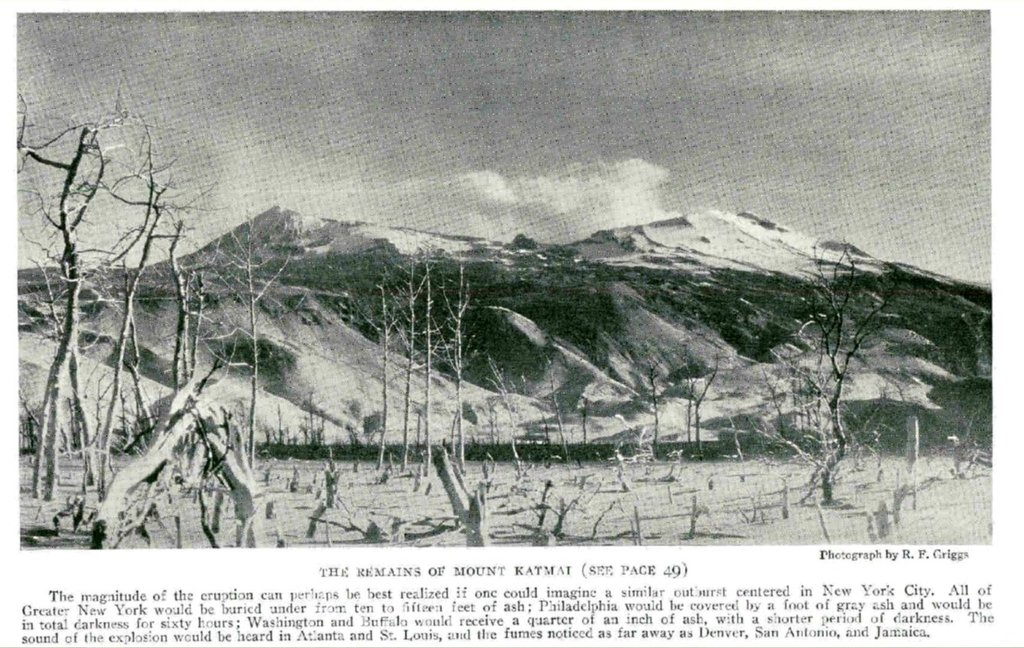 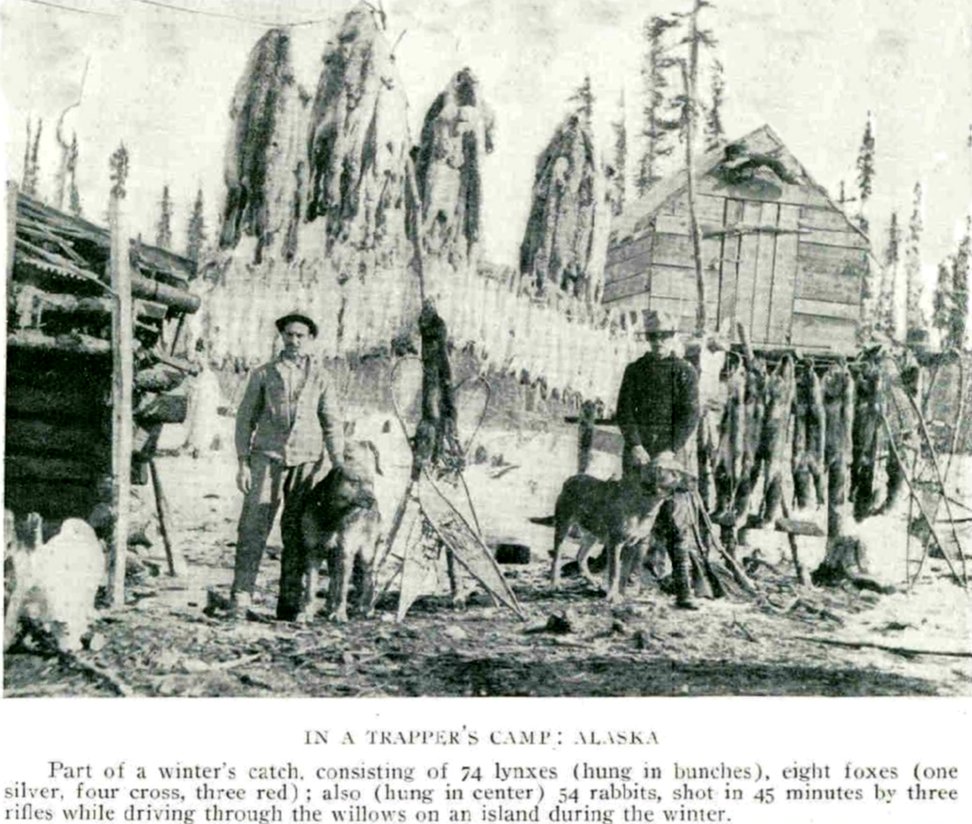 I didn't remember that variation, but I must have know about it at one time. I have seven set aside. The tree issue was a great seller for me and I also saved a few of the November only issues. Keep up the good work my friend. Mike Oliphant

Note: I just added three maps, each one referenced by the second, third, and fourth articles respectively in this review.  (Thanks so much, Phil.)

Tom, I have a nice copy of that issue with cover showing all 4 articles and then I have a bound volume (Jan-Jun) which does not have that fourth article in it.
That unbound Jan 1917 issue IS FOR SALE if anyone is intereated.

I do not know why they would exclude the last article from the bound volume.  It appears in both variants.

Does your bound volume have the covers and ads removed?

Yes they do Tom

This is only a guess, but what might have happened was the issue used had the cover with the British Seaports article missing and the bindery that bound it mistook that as meaning it wasn't part of the issue.  Throwing the baby out with the bath water, so to speak.