Over the years National Geographic printed articles about certain topics again and again.  These articles would be reprinted as individual articles because of their popularity.  One of my favorite recurring theme is the articles about space exploration (currently I have seven of these reprints).  Here is a list of all space-related article reprints documented by Roger Nathan with photos and descriptions of the ones in my possession.  Nathan lists 27 space-related articles between 1939 and 1978 that were reissued as Article Reprints.  Also included is one he missed.  Here they are in chronological order:

News of the Universe

Rockets Explore the Air Above Us

Exploring Our Neighbor World, the Moon

First Color Portraits of the Heavens

This fifty-one-page article discusses the missile test range from Cape Canaveral to the South Atlantic.  It contains nine black-and-white and thirty-seven color photographs. Exploring Tomorrow With the Space Agency 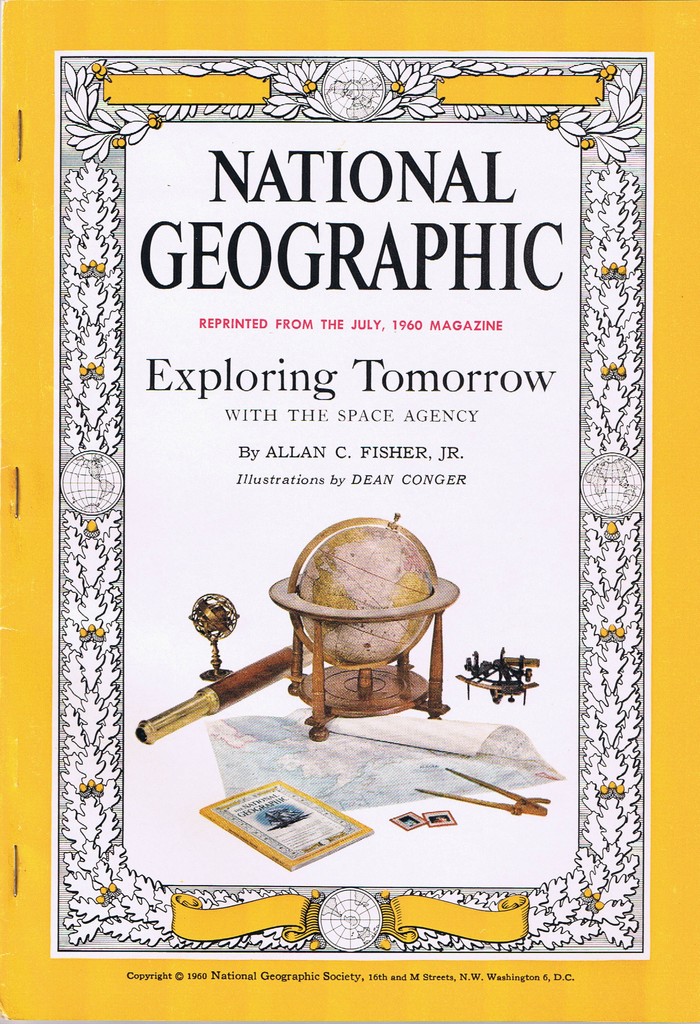 This thirty-three-page article discusses Project Mercury’s upcoming manned spaceflights and the testing leading up to them.  It contains sixteen black-and-white and twenty-six color photographs. 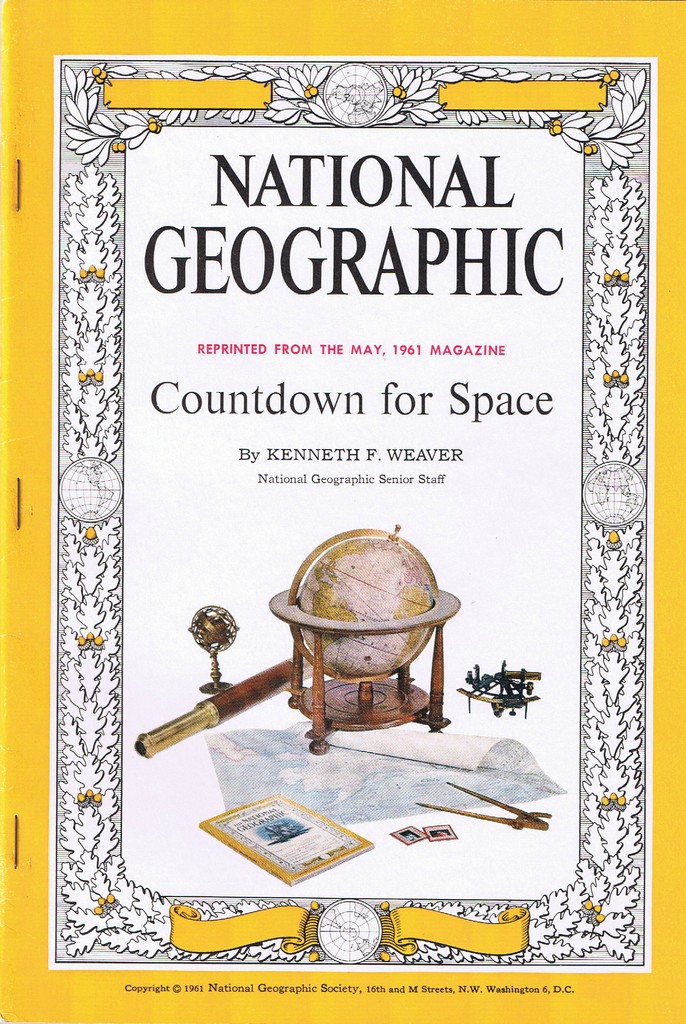 The Flight of Freedom 7

This twenty-nine-page set of three articles reviews the suborbital flight of Alan B. Shepard in the Mercury capsule Freedom 7.  It contains two black-and-white and thirty-six color photographs. 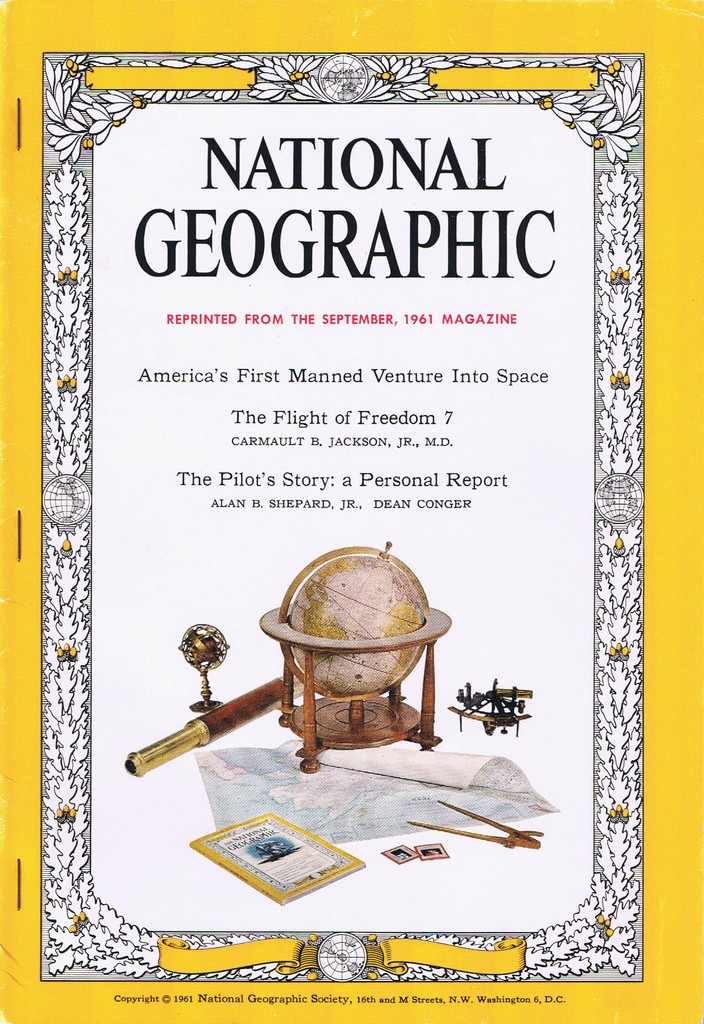 This thirty-six-page article reviews the orbital flight of John Glenn in the Mercury capsule Friendship 7.  It contains one black-and-white and thirty-seven color photographs. 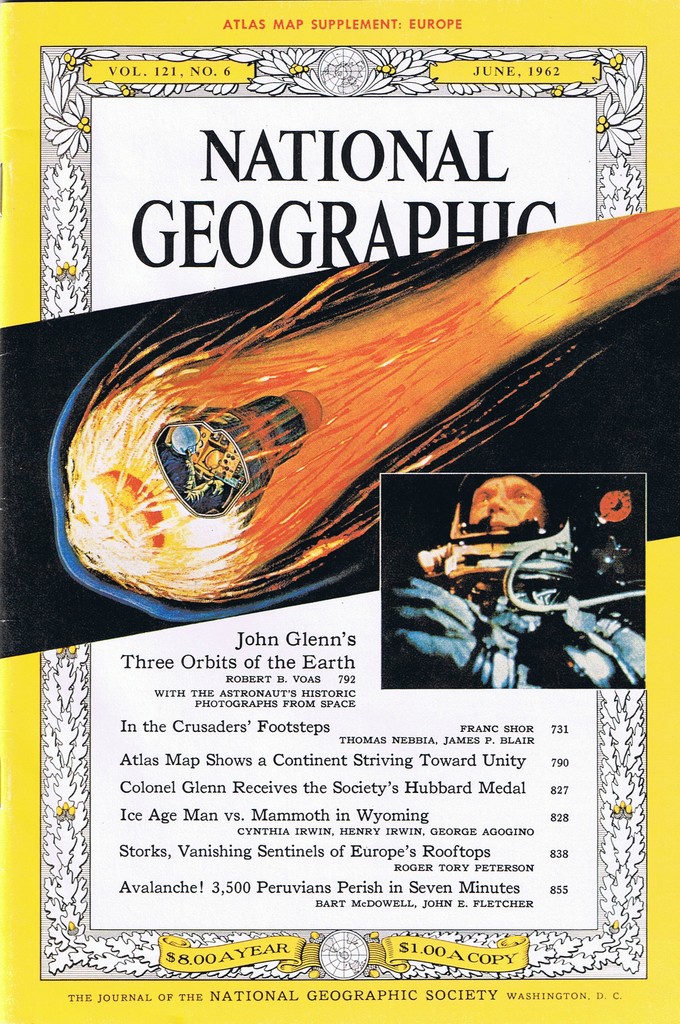 This is an eleven-page reprint of an article about the first successful mission to another planet, Mariner 2 to Venus.  It was produced by the Society for NASA's Jet Propulsion Laboratory, the manager of the mission. 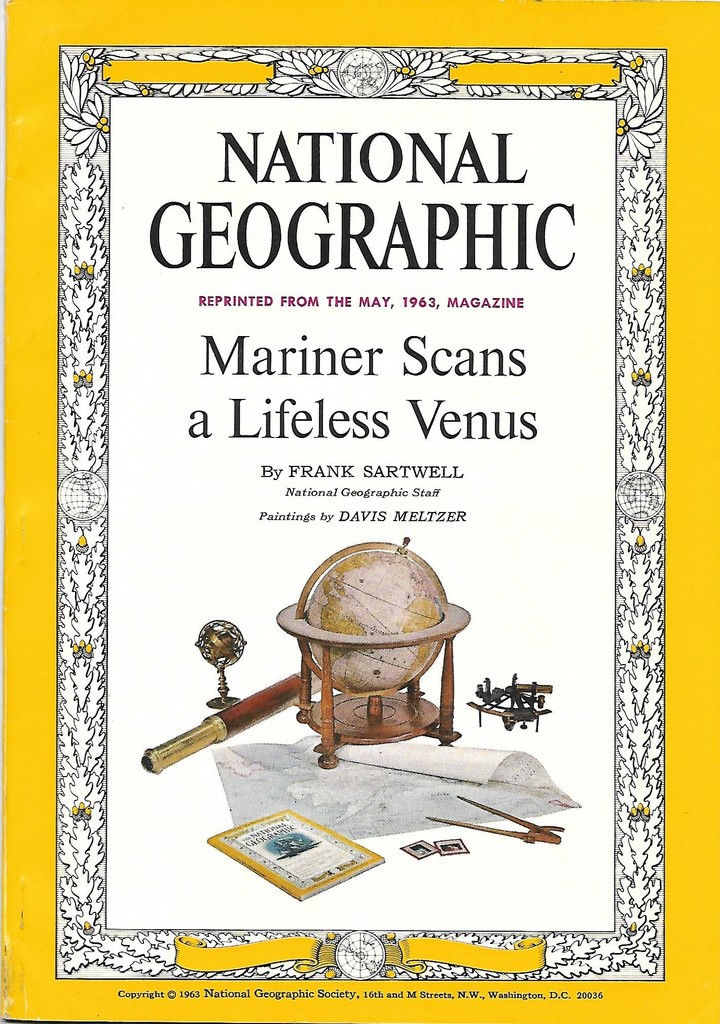 The Solar Eclipse From a Jet

Footprints on the Moon

This forty-six-page article discusses Project Apollo and its upcoming missions to the Moon.  It contains one black-and-white and forty-two color photographs. 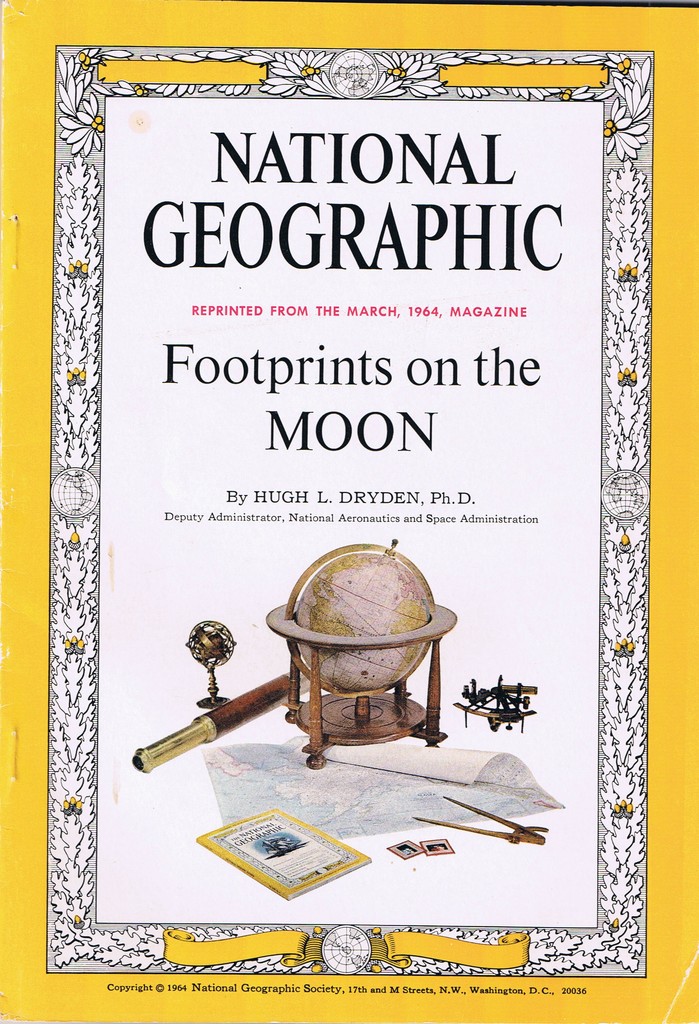 The Moon Close Up

Surveyor: Candid Camera on the Moon

This 15-page reprint of an article documents the successful mission of Surveyor 1, the first U.S. moon lander. 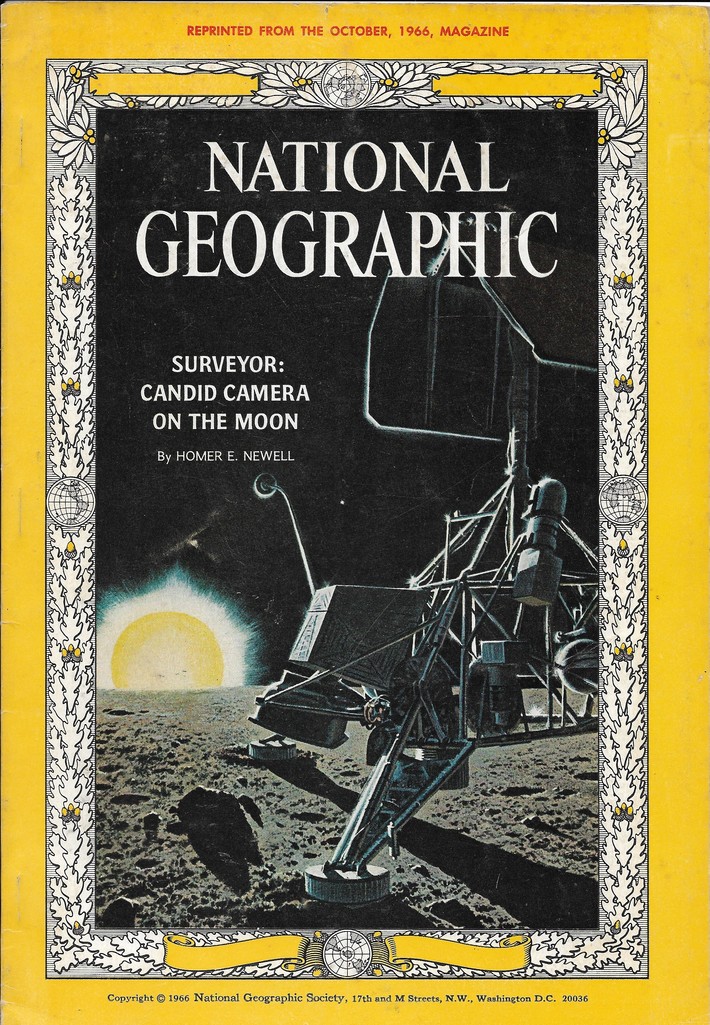 The Earth From Orbit

This twenty-eight page article documents color photography of the earth by Gemini astronauts. “A Most Fantastic Voyage”: The Story of Apollo 8’s Rendezvous With the Moon

First Explorers on the Moon: The Incredible Story of Apollo 11

Voyage to the Planets

This 36-page Article Reprint contains two articles.  The first is entitled "Mariner 9: Journey to Mars".  It is 34 pages long and was written by Kenneth F Weaver.  It also has six paintings by Ludek Pasek.  The article contains two diagrams and 26 photographs, four in color.  It tells the story of Mariner 9's mission to map Mars from orbit.

The second article is only two pages long with one of them being a full-page, color photo.  It was also written by Kenneth F. Weaver and is entitled "The Search for Life on Mars".  It discusses the upcoming Viking missions to Mars, their landings and subsequent search for life. 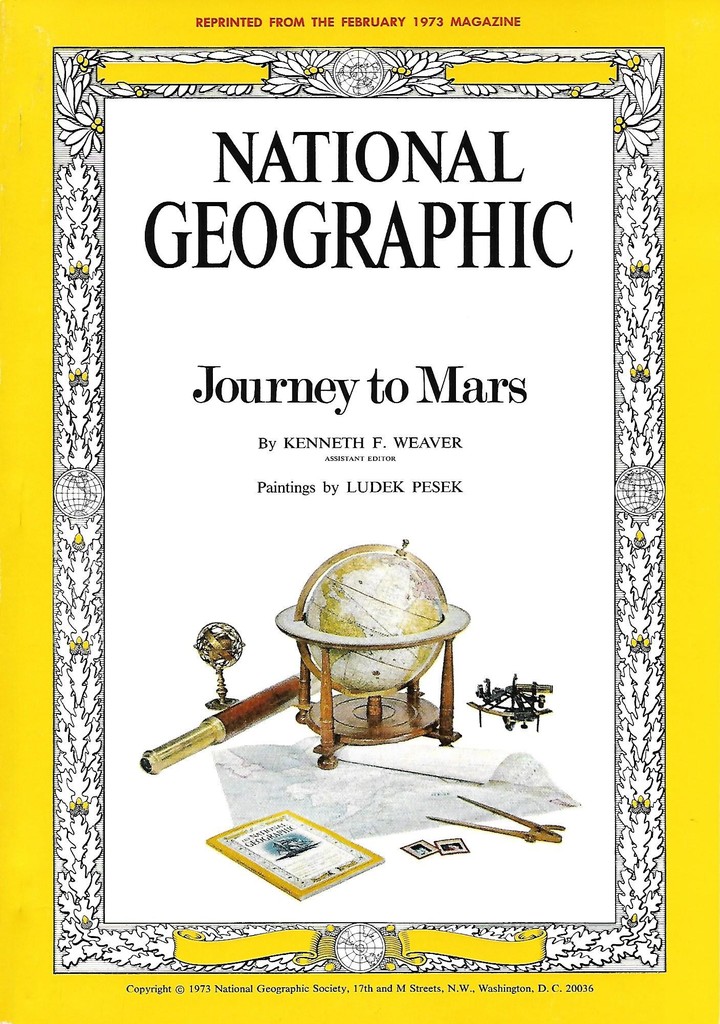 Skylab: Outpost on the Frontier of Space

This is a 63-page Article Reprint containing three parts:

"Skylab, Outpost at the Frontier of Space" was written by Thomas Y. Canby, Senior Editorial Staff.  It tells of the space station and its mission.  It is 29 pages long and has 27 color photographs, a color diagram of the station, and three black-and-white sketches.

"Skylab Looks at Earth" has no byline.  It covers the results of Skylab's Earth Resources mission.  It is 24 pages long and has 29 color or false color photographs.

"The Sun as Never Seen Before" was written by Edward G. Gibson, Ph.D., one of the nine Skylab astronauts.  It covers the results of the Skylab Solar Observatory.  It is 10 pages long and has 17 color or false color images. 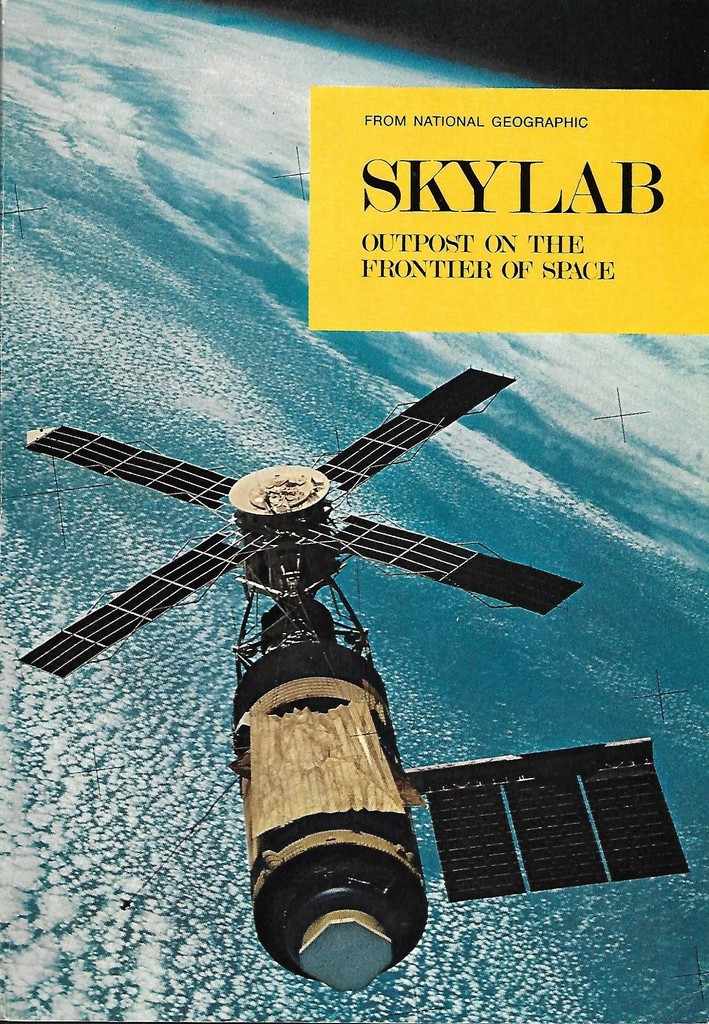 This 30-page article reprint documents the successful missions of Viking I and Viking II, the first successful U. S. landings on Mars. Aluminum, From Napoleon III to NASA

I have two more:

Are you interested in having pictures of the reprints not in you collection.  Your listing is amazing.  I never realized how many were about space exploration!

For now I'm using this Discussion as motivation to collect the rest.

If I change my mind, I'll let you know about the images.

And thanks for the kind words.

So may I take this then that you are not "one and done" after all ?

The article reprints are not a high priority for me like the map indexes are.  That being said, they were never part of my "one and done" collection.

Note: I just added a citation with photograph for the October 1974 Article Reprint: "Skylab, Outpost on the Frontier of Space".

Note: I just updated the Skylab entry with text.

Note: I just added a citation, with photograph and text, for the February 1973 Article Reprint, "Journey to Mars".

Note: I just added a citation, with photograph, to this list for the reprint of the May 1963 article "Mariner Scans a Lifeless Venus".

Note: I just added an entry with photo for the November 1966 space-related article "The Earth From Orbit".